Talk to long-time anglers with a favorite spot and they will often tell stories of one fish they could never get. In mythical overtones, they will speak of its ability to avoid capture, attributing an almost supernatural intelligence (for a fish). Such stories were once so common that 'fish story' became its own brand of tall tale.

A new study mapped individual heritable traits of fish to environmental conditions and concluded that some fish really are going to be harder to catch.

The work by the University of Eastern Finland and the Finnish Game and Fisheries Research Institute
in the Paltamo Unit of the Finnish Game and Fisheries Research Institute
used long-term observations (plenty of fishers know what that is like) of behavior in groups and angling trials to analyze which behaviors correlated to vulnerability to fishing in brown trout reared in traditional and enriched hatchery rearing environments. 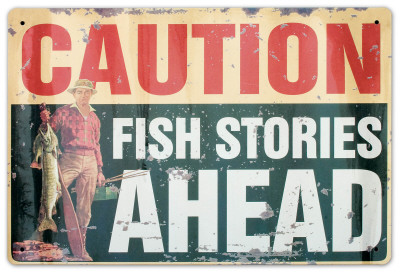 Credit: Tom Balistreri asks, in rhyming verse, 'Are all fishermen liars? Or do only liars fish?'

Based on the results, they predicted that fishing modifies the heritable behavioral traits of fish by favoring cautious fish. Earlier studies have found that in heavily fished populations they reach sexual maturity earlier and grow slower than their ancestors.

The new experiment discovered individual differences in the behavior of brown trout transferred to semi-natural stream environments. The differences discovered especially in the exploratory behavior of the fish soon after the transfer were linked to vulnerability to fishing in an experimental fishing setting. In the experiment, brown trout were fished by angling from ponds with different fish densities.

The more active the brown trout were to explore new environments in the behavioral test, the more vulnerable they were to fishing. However, fish body size or individual differences in swimming activity during the entire experiment were not linked to vulnerability to fishing. Individuals that did not learn to eat the natural food items present in the semi-natural behavioral test channels during the long behavioral test and whose condition weakened during the test were more vulnerable to fishing than individuals that remained in good condition. The probability of brown trout to be caught grew as fish density in the experimental ponds increased.

In enriched hatchery rearing, ponds are modified to resemble natural environments more than in traditional hatchery rearing: Ponds have structures providing the fish with shelter, and water levels and current speeds and directions are altered at irregular intervals. Furthermore, feeding takes place according to an irregular schedule. Brown trout reared in traditional environments were more active to explore new surroundings than fish reared in enriched environments, and this behavior also makes them more vulnerable to fishing.

According to the study, the introduction of natural elements to fish hatcheries enhances the later survival of fish released into the wild, as fish grown in enriched environments learn to find food and avoid fishing more often than fish reared in traditional environments.

Have a fish story of your own? Let us know in the comments. Anything that concludes with 'I threw it back even though it was the biggest fish I had ever seen, and it just sat there and people build houses on it and now they call it Finland' is probably pretty good.