Scientists have documented the rapid evolution of a native lizard species as a result of pressure from an invading lizard species introduced from Cuba.

After contact with the invasive species, the native lizards began perching higher in trees, and, generation after generation, their feet evolved to become better at gripping the thinner, smoother branches found higher up. It only took about 20 generations - 15 years - but even within a few months, native lizards had begun shifting to higher perches and as time passed their toe pads had become larger, with more sticky scales on their feet.

The native lizards studied, known as Carolina anoles or green anoles, are common in the southeastern U.S. The invasive species, Cuban anoles or brown anoles, are native to Cuba and the Bahamas. Brown anoles first appeared in South Florida in the 1950s, possibly as stowaways in agricultural shipments from Cuba, and have since spread across the southeastern U.S. and have even jumped to Hawaii. 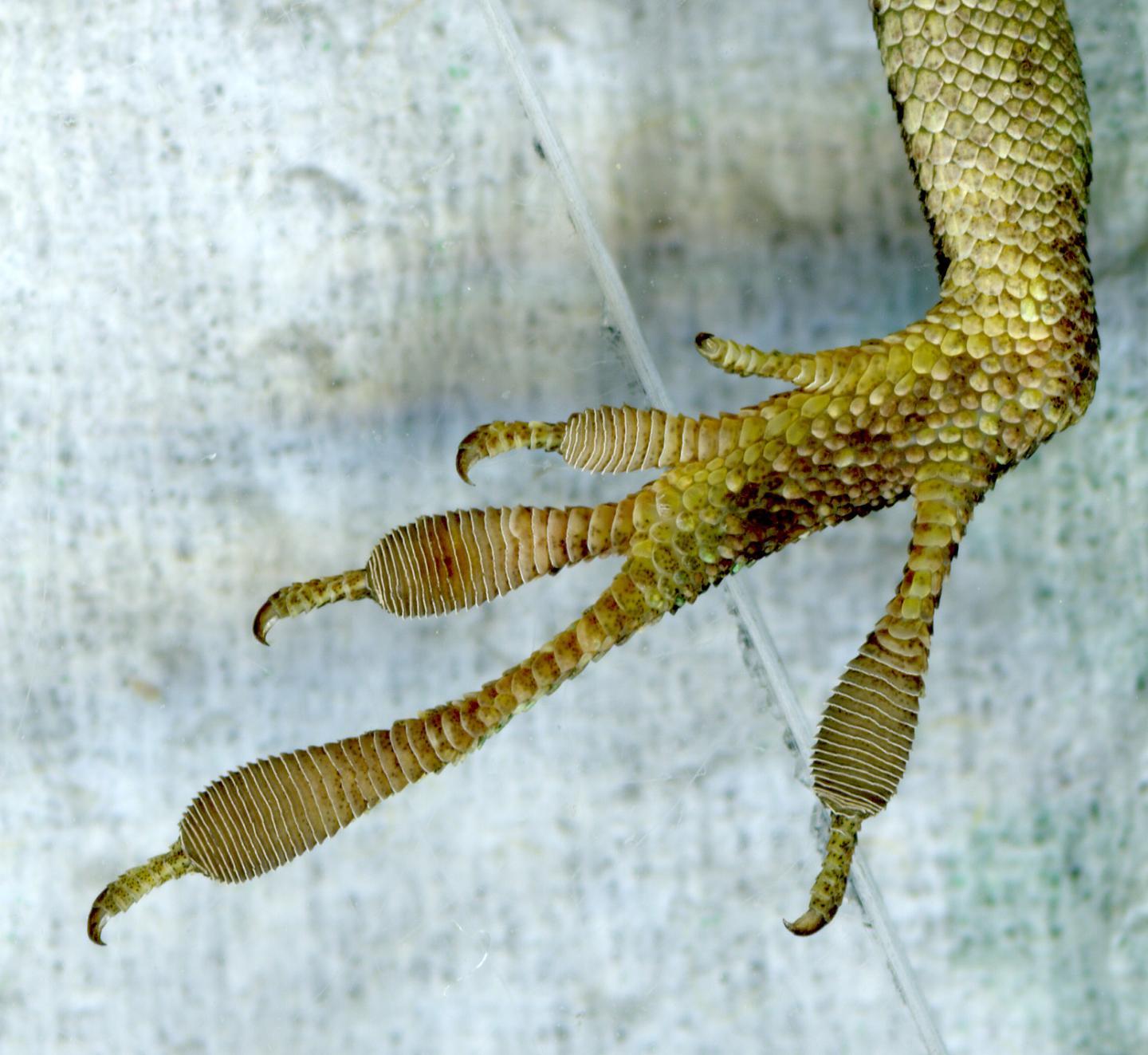 A flatbed digital scan of the left hind foot of Anolis carolinensis, or green anole. Toepad measurements were taken on the expanded scales at the end of the longest toe.

"We did predict that we'd see a change, but the degree and quickness with which they evolved was surprising," said Yoel Stuart, a postdoctoral researcher at The University of Texas at Austin and lead author of the paper in Science. "To put this shift in perspective, if human height were evolving as fast as these lizards' toes, the height of an average American man would increase from about 5 foot 9 inches today to about 6 foot 4 inches within 20 generations — an increase that would make the average U.S. male the height of an NBA shooting guard. Although humans live longer than lizards, this rate of change would still be rapid in evolutionary terms."

This latest study is one of only a few well-documented examples of what evolutionary biologists call "character displacement," in which similar species competing with each other evolve differences to take advantage of different ecological niches. A classic example comes from the finches studied by Charles Darwin. Two species of finch in the Galápagos Islands diverged in beak shape as they adapted to different food sources.

The researchers speculate that the competition between brown and green anoles for the same food and space may be driving the adaptations of the green anoles. Stuart also noted that the adults of both species are known to eat the hatchlings of the other species.

"So it may be that if you're a hatchling, you need to move up into the trees quickly or you'll get eaten," said Stuart. "Maybe if you have bigger toe pads, you'll do that better than if you don't."