News Staff
The brain’s GPS wouldn't be much value if its maps of our surroundings that were not calibrated to the real world - grounded in reality.

But they are, and a new study shows how this is done.

The way that the brain’s internal maps are linked and anchored to the external world has been a mystery for a decade, ever since 2014 Nobel Laureates May-Britt and Edvard Moser discovered grid cells, the key reference system of our brain’s spatial navigation system. Now, researchers at the Mosers’ Kavli Institute for Systems Neuroscience believe they have solved this mystery.

Think of regular maps and how they relate to your surroundings. When we go hiking and orient ourselves with a map and compass, we align the map using the north arrow on the compass and match it to the longitude lines on the map, to align the map with the terrain and make sure we find our way (unless we have a GPS that does the work for us). 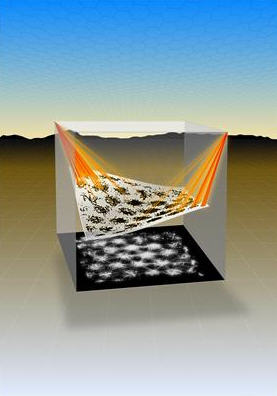 'Right frame of mind'. Conceptual interpretation of results. The internal grid map of space must be anchored to the external geometry of the world. Forces act on the pattern (orange lines) to produce a final grid geometry that is most asymmetric in relation to the environment. Husserl would be proud.

We know our brains contain a number of internal maps, all mapped onto the surroundings, ready to be pulled up to guide us in the right direction. These grid maps come in different sizes and resolutions, but until now they have offered few clues as to how they are anchored to the surroundings.

The findings published in Nature this week explain the surprising twist the brain uses to align its internal maps.

Stitched to the wall?

“We recorded the activity of hundreds of grid cells,” Tor Stensola, a researcher at the Kavli Institute for Systems Neuroscience says. “Looking at the information from more than 800 grid cells, we noticed that grid patterns typically were oriented in the same few directions. This was true for all the animals studied, which suggested the grid map aligns to its surroundings in a systematic way. Grid cells all seemed to be anchored to one of the local walls, but always with a specific offset of a few degrees. So we decided to investigate this.”

The researchers recorded the activity of grid cells in rats as the animals foraged for cookie crumbs in a 1.5 square metre box. Now, if a map, represented by the activity of grid cells, were to represent the box it would need to look the same every time the rat ran in the box. And it would need to be aligned the same way too, independently of which way the rat ran, and where the rat was put into the box. The recorded maps were indeed consistent. Each grid pattern was anchored to one of the walls. But none of the grids’ axes were perfectly aligned with either wall; they were consistently askew.

“The map was rotated,” Stensola says, where the angle was always approximately 7.5 degrees off of the anchored wall. “We did some calculations and realized that there might be a very good reason for that particular angle. At 0- and 15-degree angles, the map would be symmetric. In other words, if it were perfectly aligned with the wall, that would mean it would mirror either the cardinal axis or the diagonal of the square box respectively, making it likely that places would get mixed up. The 7.5 degrees angle of rotation is the one that minimizes symmetry with axes in the environment, thereby minimizing these kinds of potential errors.”

The researchers found more asymmetry in the grids. Grid patterns were not perfectly hexagonal, but instead seemed distorted such that they became asymmetric. Although this was known from before, nobody had any idea why.

“The inner six fields of the grid, the centre of the map, would lie on a perfect circle if the pattern was perfectly hexagonal,” Stensola says. “The asymmetry caused these points to form an ellipse instead.”

The researchers looked into the connection between the rotation and anchoring of the grid, and the distortion of the pattern and found an almost perfect correspondence between the direction the ellipse was pointing and the direction the grid was anchored towards. By skewing the pattern along one of the walls – a process known as shearing– the researchers could replicate both the ellipse and the 7.5-degree rotation of the grid.

Shearing forces displace parts of an object differently depending on the location of the part. To visualize how it works, think of when you push a deck of cards along the table, and the deck slides. The bottom card will stay put, the top card will be moved the most, and all the cards in between will move a distance that reflect its position in the deck. This kind of deformation has been seen in nature, where it is known to happen in trilobite fossils when external forces in the ground squeeze them into a new shape. (PICTURES)

The researchers believe that once an animal experiences a novel environment it will form a map of the environment where one of the axes is perfectly aligned with a nearby wall. Gradually, shearing forces will distort and skew the map 7.5 degrees away from the anchoring wall, forming a stable and robust map with low chance of error.

Cornfields and the brain

But what happens to the internal maps when an environment is very large, like a cornfield? If local landmarks are very far apart, it may be advantageous for the brain to create several local and accurate maps rather than one inaccurate overall map.

The researchers tested this by recording grids in a much bigger square box (2.2m squared). The map had the same asymmetries here as in the smaller box, but showed one crucial difference.

“As the box got bigger, some maps looked different,” Stensola explains. “The maps broke in two, and became two separate local maps for the same box, anchored to opposite walls. The grids were just as elliptical as in the smaller box. When the maps broke apart, we had to reevaluate. We knew that maps could anchor locally in complex environments. We now believe that the shearing forces can operate on not only the entire environment, but may apply locally as well.”

This distortion towards asymmetry is likely what our brains use to reduce the frequency of error in self-localization, the researchers believe.

Professor Edvard Moser, director of the Kavli Institute for Systems Neuroscience, believes these findings are important in connecting different fields of science.

“It is always a great feeling when we find the solution to a mystery that has puzzled us for a decade,” he says. “The findings give us more clues as to how our internal maps interact with the surroundings. Now we’ll have to figure out in detail how the information about the orientation of walls and boundaries in the surroundings reach the grid maps, and how this information is processed. Perhaps border cells will prove to hold the answer to this, we do not know this for sure yet.”

Moser notes that they had to turn to physics to solve the puzzle of the sheared maps. “How the laws of physics apply in the nervous system is an area full of unsolved questions. We’ll just have to keep up the work to find out.”