Quantitative analysis of the performance of men and women professional tennis players over the past five completed seasons shows for the first time that evidence of inconsistency in women's play is likely attributable to match format (e.g., best of three or five sets), not gender, Stephanie Kovalchik--an associate statistician with the RAND Corporation--today revealed at a session focused on analytics of women's sports at the 2015 Joint Statistical Meetings (JSM 2015) in Seattle.

During her topic-contributed session, titled "Are Women Professional Tennis Players Really Less Consistent Than Male Players?", Kovalchik said she carried out the research project to test the hypothesis that female tennis players are less consistent than their male counterparts.

"The results suggest that differences in consistency between the women's and men's tours are not due to gender, but rather to differences in the format of matches men and women play at the Grand Slam events--Wimbledon and the Australian, French and U.S. Opens," Kovalchik explained.

For her analysis, Kovalchik developed a series of measures of consistency and applied those to performance data for singles match-play on the Women's Tennis Association (WTA) and Association of Tennis Professionals (ATP) tours for the 2010 through 2014 seasons. The tournaments that make up the season are grouped into tiers according to difficulty. The Grand Slams represent the highest tier for both tours. The next-highest tier for the ATP is the nine tournaments that make up the Masters 1000#. The analogous tier for the WTA combines the Premier Mandatory^ and Premier 5* tournaments, which Kovalchik refers to as the Premier 5+ in her analysis. 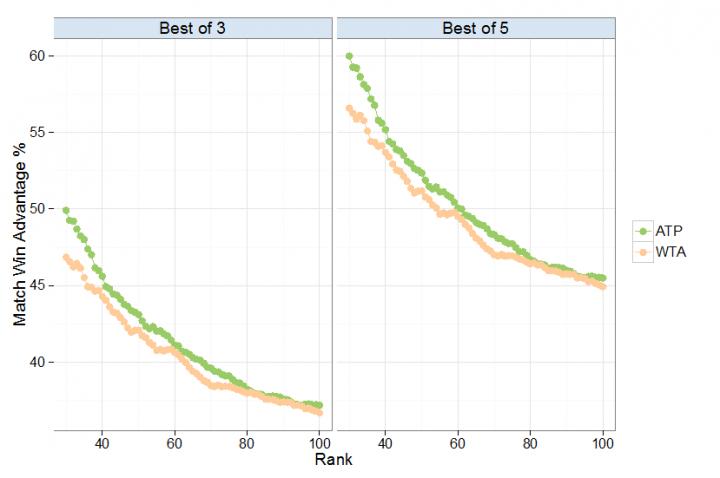 The following summarizes the six measures of consistency and the findings for each:

1. Upsets--A match win is considered an upset when the player least expected to win--a player of lower rank or seeding--prevails. During the seasons studied, the overall frequency of upsets was similar: 31.5% for the WTA and 29.6% for the ATP. However, when the frequency of upsets was broken down by tournament tier, the study found a difference only for Grand Slam events.

2. Streaks--The characteristics of maximum win streaks for the top 100 male and female players shows the distribution of consecutive wins for both tours lines up almost exactly.

3. Letdowns--A letdown is the phenomenon of a first or second round loss following a big win. The likelihood a finalist or winner of a big tournament experienced an early exit in his or her next tournament appearance was greater for female players, but only at the Grand Slam events. The frequency of letdowns was statistically similar at the other tour events.

5. Variation in Serve/Return Ability--Women and men had no serve/return consistency differences at the Grand Slam events and some mixed differences at Masters/Premier 5+ tournaments, with top women players having less stable serve win percentages against higher-ranked players and top men players having less stable serve performance against lower-ranked players. These mixed findings indicate men's serve and return skills are not universally more stable than women's.

6. Reversals in Game Spread--Reversals in game spread is an average of the change in games won between consecutive sets--a larger average reversal indicates a more up-and-down match. Over the past five seasons, the occurrence of lopsided matches was very similar for both tours. Overall, the median game spread reversals for each tour was 2, and the ATP actually had a 0.1 greater spread reversal at Grand Slam tournaments, suggesting a small but greater level of inconsistency.

Of the six measures of consistency Kovalchik examined, half showed no gender differences in performance. For the three measures--upsets, letdowns and variation in win percentage--differences were found that suggest female players have had less consistent performance in the seasons considered. However, these differences were observed only at Grand Slam tournaments, where women play a different match format than males--women play a best-of-three format, where the winner is the first to win two sets; men play a best-of-five, where the winner is the first to win three sets.

Next, Kovalchik examined whether match format could explain the observed tour differences in consistency. Logic suggests a best-of-five format favors higher-ranked players more than a best-of-three, since it is harder for an underdog to win three sets against a better player than two sets. Using a mathematical analysis, she quantified the edge a best-of-five format provides. This calculation revealed that the theoretical win advantage for the higher-ranked player in a best-of-five match is 7 to 10 percentage points.

Based on set-win probabilities for each tour from 2010 to 2014, Kovalchik next measured the advantage a best-of-five format would be expected to provide given real performance data. Although the higher-ranked ATP player has a slightly larger advantage under either match format, the tour differences are minuscule in contrast to the advantage provided by the best-of-five format, which gives a 9 percentage point edge overall.

"When it comes to comparisons of men's and women's athletic performance, the quantitative evidence in my analysis puts a spotlight on two strong biases among tennis commentators: an overemphasis of performance at Grand Slams and the discounting of differences between the tours that extend beyond gender," stated Kovalchik.