News Staff
Aggressive, vengeful behavior of individuals in some South American groups has been considered the means for men to obtain more wives and more children, but an international team of anthropologists working in Ecuador among the Waorani show that sometimes the macho guy does not do better.

The Waorani are rainforest manioc horticulturalists and foragers. When the first peaceful contact occurred in 1958, they numbered about 500 people living in an area the size of New Jersey between the Napo and Curaray rivers in the Amazon basin east of the Andes. Their abundant resources often attracted outsiders, who were promptly killed if found.

Warfare and murder were common among the Waorani, who are known to be more warlike than the Yanomamo. They practiced their violence on each other as well as on outsiders. Eventually, over a period of 14 years, the missionaries pacified all the sections of the Waorani population. Aggressive warfare and raiding are now almost gone. 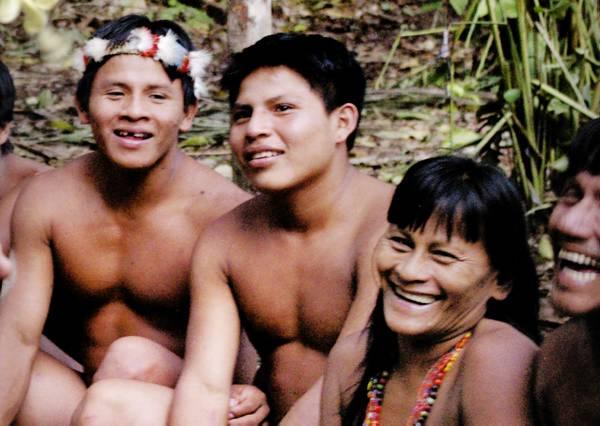 "In 1988, Napoleon Chagnon published evidence that among the famously warlike Yanomamo of Venezuela, men who had participated in a homicide had significantly more wives and children than their less warlike brethren," said Stephen Beckerman, associate professor of anthropology, Penn State. "Our research among the Waorani indicates that more aggressive warriors have lower indices of reproductive success than less warlike men."

"In light of the documented abundance of wild resources, resource limitation cannot be considered the cause of warfare among the Waorani," said Beckerman.

The researchers interviewed men in 23 settlements. They interviewed any man old enough to have experienced warfare before the pacification that could be found and who agreed to the interview. The researchers collected Waorani men's genealogies, reproductive history, narrative personal life history and warfare history. The raiding database contained 95 men. Beckerman and his colleagues report their research in this week's edition of the Proceedings of the National Academy of Science online.

"Our sample of warriors includes both living and dead men," said Beckerman. "We ranked aggression by the number of raids they participated in. Our analysis is free of the problem caused by the inherent correlation of the warrior's age with both participation in raids and reproductive success."

The researchers found that more aggressive men do not acquire more wives than milder men. They do not have more children and their wives and children do not survive longer. In fact, warlike men have fewer children who survive to reproductive age.

Why do these results differ from Chagnon's and why are Waorani men so bellicose when there appears to be no benefit? The researchers suggest that while both the Yanomamo and Waorani's aggressiveness is for revenge, the Yanomamo's warfare cycles have peaceful interludes where warriors can reap the benefits and accrue wives and children. The Waorani men do not incorporate peaceful interludes between their aggressive endeavors and will even initiate an action based on something that occurred in their grandparent's generation. In general, the Waorani goal was to eliminate the other side.

Another difference between the Yanomamo and the Waorani is that even with chronic warfare, the Yanomamo population had grown over the two centuries before Chagnon's investigation.

"The Waorani, as far as we could tell, were well along in the process of killing themselves off at the time of peaceful contact," the researchers said.

Cultural differences between the Yanomamo and the Waorani may point to why aggression and warlike behavior worked for Yanomamo men, but did not work for Waorani men.