This morning, a large active region on the sun erupted with another X-class flare, its fourth since Oct. 24th.

Solar flares are powerful bursts of radiation. Harmful radiation from a flare cannot pass through Earth's atmosphere to physically affect humans on the ground, however -- when intense enough -- they can disturb the atmosphere in the layer where GPS and communications signals travel.

X-class denotes the most intense flares, while the number provides more information about its strength. An X2 is twice as intense as an X1, an X3 is three times as intense, etc.  This flare peaked at 10:47 A.M. EDT. 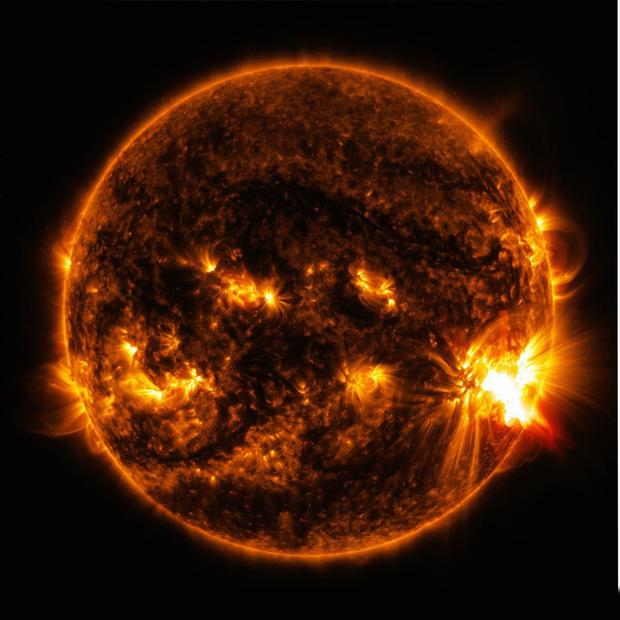 NASA's Solar Dynamics Observatory captured this image of an X-class solar flare bursting off the lower right side of the sun on Oct. 27, 2014. The image shows a blend of extreme ultraviolet light with wavelengths of 131 and 171 Angstroms. Credit: NASA SDO

Continuing a week's worth of substantial flares beginning on Oct.19, 2014, the sun emitted two mid-level solar flares on Oct. 26 and Oct. 27. The first peaked at 8:34 pm EDT on Oct. 26, 2014, and the second peaked almost 10 hours later at 6:09 am EDT on Oct. 27. NASA's Solar Dynamics Observatory, which constantly observes the sun, captured images of both flares.
The first flare was classified as an M7.1-class flare.

The second flare was a bit weaker, classified as an M6.7-class. M-class flares are one tenth as strong as X-class flares, which are the most intense flares. The number provides more information about its strength. An M2 is twice as intense as an M1, an M3 is three times as intense, etc.


The series of flares over the course of the previous week all erupted from a particularly large active region on the sun, labeled AR 12192 – the largest seen on the sun in 24 years. Active regions are areas of intense and complex magnetic fields that are often the source of solar flares.

Active regions are more common at the moment as we are in what's called solar maximum, which is the peak of the sun's activity, occurring approximately every 11 years.