News Staff
A team that developed an algorithm capable of automating the analysis of plankton populations – a critical step in measuring ocean health - has won the inaugural National Data Science Bowl.

The winning group discovered a way to effectively organize a data set that would have taken marine biologists more than a century to manually classify in only 90 days of analytics problem-solving. Team Deep Sea from Ghent University developed the most effective algorithm to automatically classify more than 100,000 underwater images of plankton. The work by the seven-person team of graduate students and post-doctoral researchers automated the classification process for the first time in history. and they primarily did it using Python, NumPy and Theano.

Altogether there were 15,120 submissions, 1,293 participants and 1,049 teams quickly and accurately distinguishing 121 distinct categories of oceanic organisms.

Through their work, they have enabled the rapid analysis of data sets with a digital size equivalent to 400,000 3-minute YouTube videos, enough to watch continuously for over 800 days. 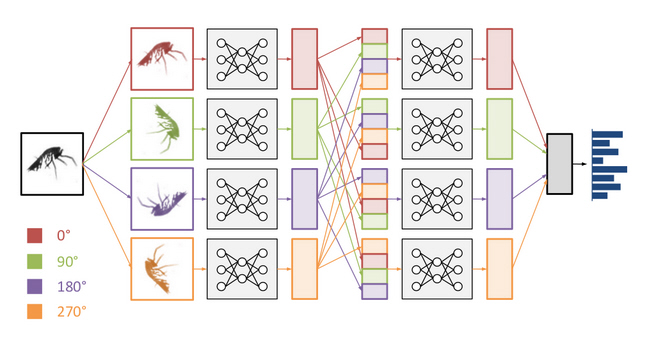 Schematic representation of a roll operation inside a convnet with cyclic pooling . Credit: Team Deep Sea

For researchers at co-sponsors the Hatfield Marine Science Center at Oregon State University, the algorithms will serve as critical tools for assessing ocean health. A large and thriving plankton population is crucial for driving some of the planet’s most life-sustaining processes.

They cycle nearly half of the carbon absorbed by the Earth’s ocean each year as well as form the foundation for marine food webs. They are extremely susceptible to changes in ocean temperature and chemistry, making them a key indicator of broader ecological health.

The algorithms created will allow rapid assessment of their populations, enabling the marine research community to monitor ocean health at an unprecedented speed and scale.

“We’re excited to receive the winning algorithms from the National Data Science Bowl and to test and validate these proofs of concepts in our own labs,” said Hatfield Marine Science Center Director Bob Cowen. “Our hope is that we will be able to expand upon this research and, eventually, make it an open source tool for the marine research community.”
News Articles
More Articles All Articles
About