Organisms in a symbiotic relationship will often shed genes as they come to rely on the other organism for crucial functions but researchers have uncovered an unusual event in which a bacterium that lives in a type of cicada split into two species - doubling the number of organisms required for the symbiosis to survive.

Cicadas of the genus Tettigades feed only on sap they suck out of plants. To create some of the essential amino acids they rely on two bacterial helpers — Candidatus Hodgkinia cicadicola and Candidatus Sulcia muelleri — with which they have lived in symbiosis for millions of years. At one time Tettigades cicadas and Hodgkinia might have been able to survive without each other, but as they evolved together, the bacterium shed genes that it no longer needed, leaving it with a very small genome of 169 genes in total.

While the extra symbiont seems to make little functional difference to the cicadas' life, it leaves the insect reliant on double the species to create the same nutrients that only one could make before. The researchers argue the genetic split was non-adaptive, meaning it happened because of chance and had no clear benefit to the organism. 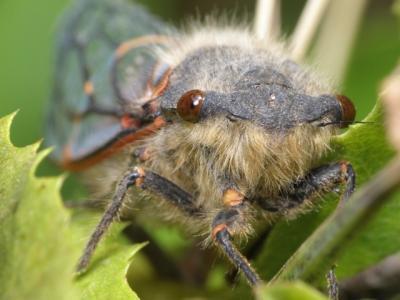 This is a cicada of the genus Tettigades, which are common to South America. Researchers found that one of its bacterial symbionts had split into two species. Photo by Juan Emilio Cucumides Carreño

CIFAR Associate John McCutcheon's lab at the University of Montana was sequencing the genome of species within this cicada when PhD student James Van Leuven discovered that at some point about 5 million years ago, one of the bacteria, Hodgkinia, had split into two separate species, both of which are now required by the cicadas.

"For the insect, it is probably easier to deal with two symbionts than it is three," McCutcheon says.

The case appears to be one of the clearest examples researchers have found yet of non-adaptive evolution, although selection still plays a role in maintaining the original gene set. The research illustrates the complex factors that drive and refine the evolution of all life, from insects to organelles such as mitochondria, which are tied closely to human disease.

"It may be a window into these sorts of fundamental processes," McCutcheon says.

McCutcheon says his involvement with CIFAR's program in Integrated Microbial Biodiversity and discussions with other CIFAR fellows had a major influence on this research.

"Without my involvement in CIFAR, this paper would either be dull or it wouldn't exist," he says.

"Members of the Integrated Microbial Biodiversity program have made me think hard about my work and about how it fits into the larger evolutionary picture."