Researchers at the University of California Riverside (UCR) have developed a new mid-season maturing variety of tangerine. They call it DaisySL, for for Daisy seedless. It is made from an irradiated bud of the seedy diploid mandarin cultivar 'Daisy,' that is a hybrid of the mandarins Fortune and Fremont

Supervised by staff scientist Timothy Williams, the planting of the trees and performed evaluations and selections of promising varieties were meticulously monitored. It was 'DaisySL' that had the right characteristics he and Mikeal Roose, a professor of genetics in the Department of Botany and Plant Sciences at UCR, were looking for in a new variety: beautiful appearance, exceptional flavor, and hardly any seeds. 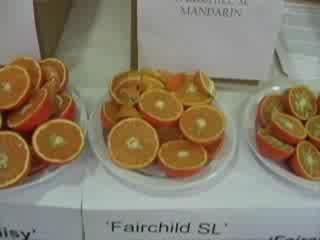 Citrus researcher Mikeal Roose talks about developing "DaisySL," a new citrus variety released by the University of California, Riverside. The new fruit is finely textured and juicy, with a rich, sweet and distinctive flavor when mature. Its rind is smooth and thin, and bears a deep orange color. (Photo Credit: J. Warnert, UCOP.)

"'DaisySL' is similar to many other selections we evaluated, but it stood out from the rest, and we knew right off that we had something special," Williams said. Roose and Williams, however, continued their research of 'DaisySL.' After waiting eight years from when they saw the first fruiting on a single tree, they decided to announce it as a new variety ready for UC Riverside to release.

When starting a mutation breeding project like the one that led to 'DaisySL,' it usually takes citrus breeders four to five years to identify a promising selection with the desired traits on an individual
tree. Breeders then establish many trees of the selection and subject them to trials in differing climatic areas to evaluate fruit quality, tree growth and production. TThis process alone takes at least three more years of fruiting. 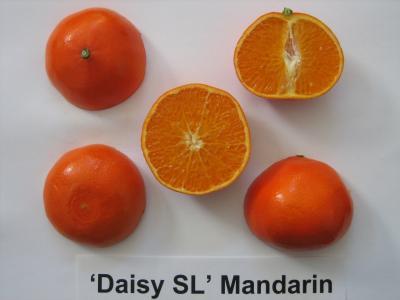 This is the "DaisySL" fruit. (Photo Credit: T. Williams, Roose lab, UC Riverside.)
As is the case with most citrus trees, 'DaisySL' was asexually reproduced by grafting of budwood onto rootstocks. Because of this, Roose and Williams estimate it will be five years before the first 'DaisySL' fruit arrives in grocery stores. They explained it takes one or two years for the industry to make enough budwood for commercial budding, another year to produce a tree, and an additional two to three years to produce the first fruit.

The 'DaisySL' fruit averages 2.7 inches (68 mm) in diameter and about 2.4 inches (60 mm) in height. Each fruit has 10-11 segments and a semi-solid axis of medium size at maturity. The fruit is juicy, averaging 47 percent juice, and weighs 135 grams on average. It averages 2.2 seeds per fruit in mixed plantings with other citrus varieties (in more uniformly varietal commercial plantings, a lower seed content is expected).

UCR has a long tradition in citrus research. In 1907, the University of California established the Citrus Experiment Station at the foot of Mount Rubidoux in Riverside to support Southern California's growing citrus industry with scientific data to improve production. In 1917, the station moved to what is now the A. Gary Anderson School of Management. The station became the foundation for the UCR campus, which opened in 1954.

Now known as the Citrus Research Center-Agricultural Experiment Station, the work of the center has grown to include all aspects of agricultural production in arid and semi-arid subtropical lands.
Research on citrus production and development of new varieties remains a major focus of UCR agricultural research. 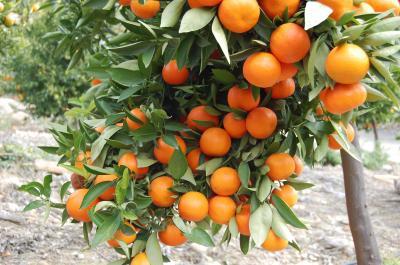