News Staff
Cosmologists may have discovered what could be the precursors of the vast clusters of galaxies that we see today. Galaxies like our Milky Way, with its 100 billion stars, are usually not found in isolation. 13.8 billion years after the Big Bang, many are in dense clusters of tens, hundreds or even thousands of galaxies.

How did such massive structures assemble in the early Universe? Using data combined from SA’s Herschel and Planck space observatories, astronomers have found objects in the distant Universe, seen at a time when it was only three billion years old, which could be precursors of the clusters seen around us today.  The Planck observatory surveyed the entire sky in nine different wavelengths from the far-infrared to radio, in order to eliminate foreground emission from our galaxy and others in the Universe. Herschel then observed these objects across the far-infrared to sub-millimeter wavelength range, but with much higher sensitivity and angular resolution.

Foreground sources can be important too, and it was in Planck’s short wavelength data that scientists were able to identify 234 bright sources with characteristics that suggested they were located in the distant, early Universe, while Herschel data revealed that the vast majority of the Planck-detected sources are consistent with dense concentrations of galaxies in the early Universe, vigorously forming new stars. 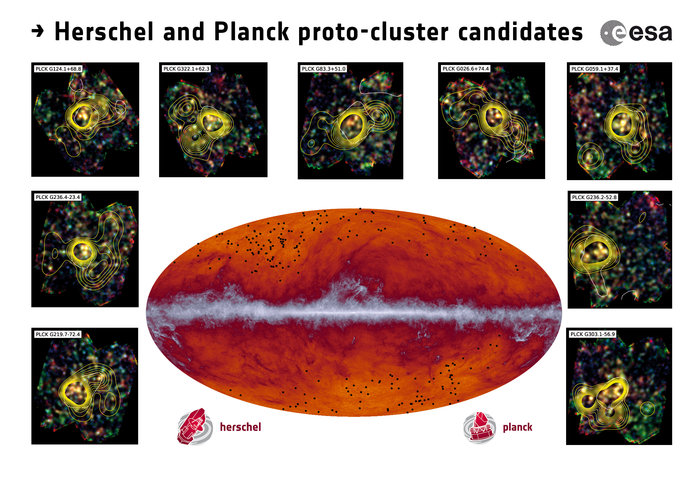 Each of these young galaxies is seen to be converting gas and dust into stars at a rate of a few hundred to 1500 times the mass of our Sun per year. By comparison, our own Milky Way galaxy today is producing stars at an average rate of just one solar mass per year.

The ages and luminosities of many of these newly discovered distant galaxy concentrations remain unknown, but they are the best candidates yet found for ‘proto-clusters’ – precursors of the large, mature galaxy clusters we see in the Universe today. 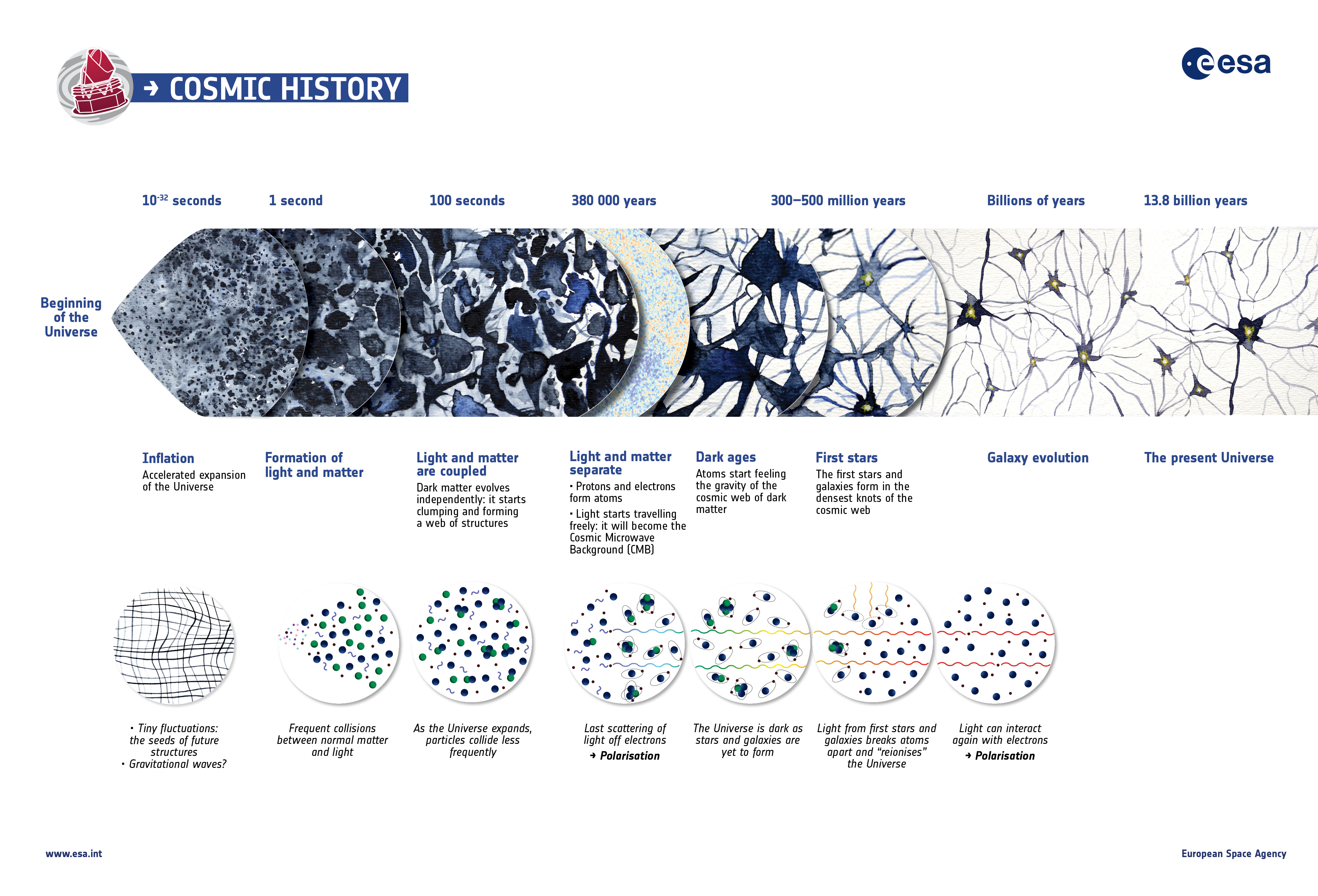 CLICK FOR FULL SIZE. The timeline in the upper part of the illustration shows an artistic view of the evolution of the cosmos on large scales. The processes depicted range from inflation, the brief era of accelerated expansion that the Universe underwent when it was a tiny fraction of a second old, to the release of the cosmic microwave background (CMB), the oldest light in our Universe, imprinted on the sky when the cosmos was just 380 000 years old; and from the ‘Dark Ages’ to the birth of the first stars and galaxies, which reionised the Universe when it was a few hundred million years old, all the way to the present time. Tiny quantum fluctuations generated during the inflationary epoch are the seeds of future structure: the stars and galaxies of today. After the end of inflation, dark matter particles started to clump around these cosmic seeds, slowly building a cosmic web of structures. Later, after the release of the CMB, normal matter started to fall into these structures, eventually giving rise to stars and galaxies. The inserts below show a zoomed-in view on some of the microscopic processes taking place during cosmic history: from the tiny fluctuations generated during inflation, to the dense soup of light and particles that filled the early Universe; from the last scattering of light off electrons, which gave rise to the CMB and its polarisation, to the reionisation of the Universe, caused by the first stars and galaxies, which induced additional polarisation on the CMB. Credit:ESA

“Hints of these kinds of objects had been found earlier in data from Herschel and other telescopes, but the all-sky capability of Planck revealed many more candidates for us to study,” says Hervé Dole of the Institut d’Astrophysique Spatiale, Orsay, lead scientist of the analysis published today in Astronomy & Astrophysics.

“We still have a lot to learn about this new population, requiring further follow-up studies with other observatories. But we believe that they are a missing piece of cosmological structure formation.”