Now patients are getting some high-tech help. REMPARK (Personal Health Device for the Remote and Autonomous Management of Parkinson’s Disease) is a wearable monitoring and actuation system that identifies the motor status of Parkinson’s patients in real time. The system will also determine what phase a patient is in while walking or performing everyday activities and provide a cue to initiate movement when a gait-freezing episode occurs.

REMPARK’s overall objective is to identify and quantify the situations that are most incapacitating for patients in their everyday lives, and intervene in the least invasive and most effective way possible. It consists of two elements: a bracelet equipped with a sensor for measuring tremor in patients, and an inertial system worn at the waist on a belt made of biocompatible material. The second part of the device, which is the size of a mobile phone, is equipped with a set of sensors and is able to process and wirelessly transmit the data collected. The system detects symptomatic parameters of the disease and determines what phase the patient is in from one moment to the next, such as on-off phenomena, freezing and other disorders associated with the disease. 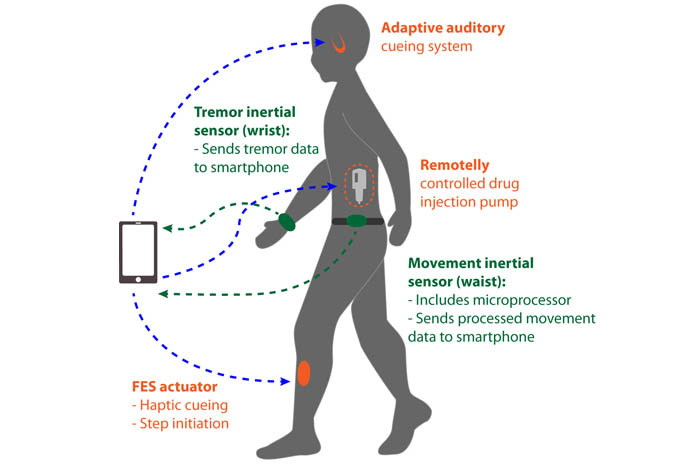 On-off phenomena are fluctuations in a patient’s motor status over the day. They are unpredictable and vary in length. Patients alternate between periods with no symptoms (“on” phases, when they are under the effect of medication) and periods when symptoms—difficulty walking, slowness of movement and even freezing of gait—reappear (“off” phases, which usually occur when the patient is receiving little or no medication).  Freezing occurs when a patient becomes completely immobile when starting to walk. Onset is sudden and episodes can last from a few seconds to several minutes.

The REMPARK system is complemented by an actuation subsystem consisting of auditory, visual or haptic (touch-related) cueing devices, a pump for regulated subcutaneous drug delivery, and a functional electrical stimulation (FES) system. The specific cueing devices used will depend on the characteristics of each patient. The final element is a mobile phone, which connects the monitoring and actuation systems, provides an interface for medical supervision, and links the system to the data server.

The system will be tested on a hundred patients in their homes rather than in the laboratory. Volunteers are currently being recruited in Spain, Italy, Ireland and Israel. The project will run until 2015,

When the project reaches its second level, the REMPARK system will include a central server where all the data from patients will be stored, processed and analysed to determine how each individual is progressing. It will also act as an intelligent system to support decision making by the supervising medical team.