Mathematicians have introduced a new element of uncertainty into an equation used to describe the behavior of fluids, which might make it possible to better reflect the inherent uncertainties of the natural world.

Math can prove almost anything. Hardly a month goes by without someone proving time travel mathematically on arXiv. Yet turbulence and nonlinear behavior are more of a struggle numerically. Just making nonlinear linear in very small steps isn't really doing much.The new paper in Proceedings of the Royal Society A deals with Burgers' equation, which is used to describe turbulence and shocks in fluid flows. The equation can be used, for example, to model the formation of a front when airflows run into each other in the atmosphere.

"Say you have a wave that's moving very fast in the atmosphere," said George Karniadakis, the Charles Pitts Robinson and John Palmer Barstow Professor of Applied Mathematics at Brown and senior author of the new research. "If the rest of the air in the domain is at rest, then flow one goes over the other. That creates a very stiff front or a shock, and that's what Burgers' equation describes." 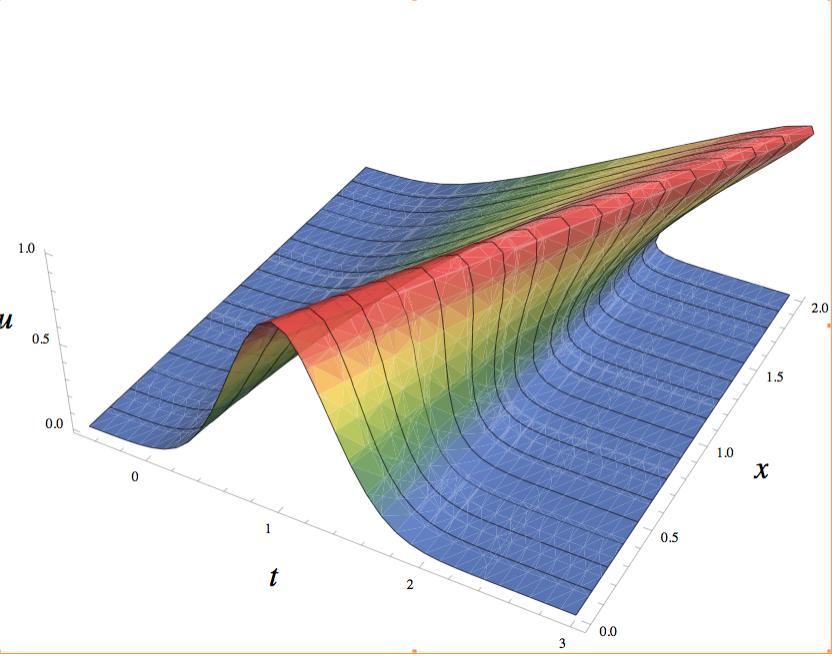 3-D plot showing how the inviscid Burgers equation can develop a shock, causing the solution process to break down. Credit: 'Noles.

It does so, however, in what Karniadakis describes as "a very sterilized" way, meaning the flows are modeled in the absence of external influences.

For example, when modeling turbulence in the atmosphere, the equations don't take into consideration the fact that the airflows are interacting not just with each other, but also with whatever terrain may be below — be it a mountain, a valley or a plain. In a general model designed to capture any random point of the atmosphere, it's impossible to know what landforms might lie underneath. But the effects of whatever those landforms might be can still be accounted for in the equation by adding a new term — one that treats those effects as a "random forcing."

In this latest research, Karniadakis and his colleagues showed that Burgers' equation can indeed be solved in the presence of this additional random term. The new term produces a range of solutions that accounts for uncertain external conditions that could be acting on the model system.

The work is part of a larger effort and a burgeoning field in mathematics called uncertainty quantification (UQ). Karniadakis is leading a Multidisciplinary University Research Initiative centered at Brown to lay out the mathematical foundations of UQ.

"The general idea in UQ," Karniadakis said, "is that when we model a system, we have to simplify it. When we simplify it, we throw out important degrees of freedom. So in UQ, we account for the fact that we committed a crime with our simplification and we try to reintroduce some of those degrees of freedom as a random forcing. It allows us to get more realism from our simulations and our predictions."

Solving these equations is computationally expensive, and only in recent years has computing power reached a level that makes such calculations possible.

"This is something people have thought about for years," Karniadakis said. "During my career, computing power has increased by a factor of a billion, so now we can think about harnessing that power."

The aim, ultimately, is to make the mathematical models describing all kinds of phenomena — from atmospheric currents to the cardiovascular system to gene expression — that better reflect the uncertainties of the natural world.