Ice sheets were never simple. There is no magic knob that could be turned to optimize melting rates and movement, outside environmental press releases.

A new paper in Nature this week
shows that not only is meltwater not as simple as sometimes contended, we don't even know what we don't know. Observations of moulins (vertical conduits connecting water on top of the glacier down to the bed of the ice sheet) and boreholes in Greenland show that subglacial channels ameliorate the speedup caused by water delivery to the base of the ice sheet in the short term.

By mid summer, however, the channels stabilize and are unable to grow any larger. In a previous paper appearing in Science, researchers had posited that the undersheet channels were not even a consideration in Greenland, but as happens in the science world, more data fills in the complex mosaic of facts and clarifies the evolution of the meltwater flow rates over the seasons. 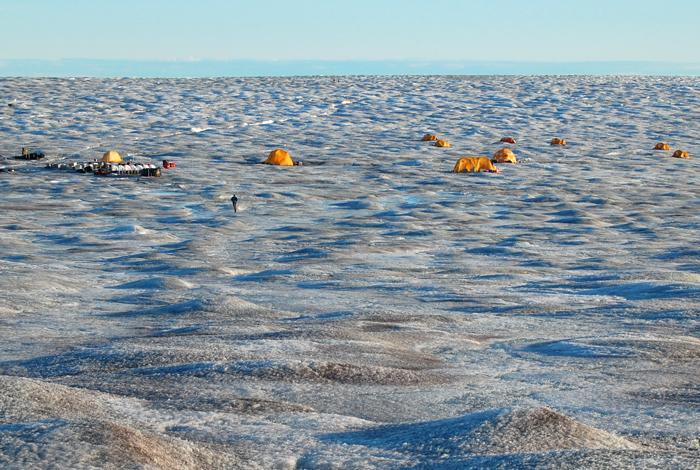 In reality, these results are not inconsistent - they are studying different places at different times - but they both are somewhat consistent in finding that channelization is less important than previously assumed.

The Greenland Ice Sheet's movement speeds up each summer as melt from the surface penetrates kilometer-thick ice through moulins, lubricating the bed of the ice sheet. Greater melt is predicted for Greenland in the future, but its impact on ice sheet flux and associated sea level rise is uncertain: direct observations of the subglacial drainage system are lacking and its evolution over the melt season is poorly understood.

"Although the Greenland Ice Sheet initially speeds up each summer in its slow-motion race to the sea, the network of meltwater channels beneath the sheet is not necessarily forming the slushy racetrack that had been previously considered," said Matthew Hoffman, a Los Alamos National Laboratory scientist on the project.

"Everyone wants to know what's happening under Greenland as it experiences more and more melt," said study coauthor Ginny Catania, a research scientist at the institute and an associate professor in the University of Texas at Austin's Jackson School of Geosciences. "This subglacial plumbing may or may not be critical for sea level rise in the next 100 years, but we don't really know until we fully understand it."

To resolve these unknowns, the research team drilled and instrumented 13 boreholes through 700-meter thick ice in west Greenland. There they performed the first combined analysis of Greenland ice velocity and water pressure in moulins and boreholes, and they determined that moulin water pressure does not lower over the latter half of the melt season, indicating a limited role of high-efficiency channels in subglacial drainage.

Instead they found that boreholes monitor a hydraulically isolated region of the bed, but decreasing water pressure seen in some boreholes can explain the decreasing ice velocity seen over the melt season.

"Like loosening the seal of a bathtub drain, the hydrologic changes that occur each summer may cause isolated pockets of pressurized water to slowly drain out from under the ice sheet, resulting in more friction," said Hoffman.

Their observations identify a previously unrecognized role of changes in hydraulically isolated regions of the bed in controlling evolution of subglacial drainage over summer. Understanding this process will be crucial for predicting the effect of increasing melt on summer speedup and associated autumn slowdown of the ice sheet into the future.