Though some see snowstorms and believe global warming has been exaggerated, a new study using predictions of Greenland ice loss and its impact on rising sea levels instead finds that other models may be greatly underestimating it.

The new estimate simulates future distribution of lakes that form on the ice sheet surface from melted snow and ice, called supraglacial lakes. Previously, the impact of supraglacial lakes on Greenland ice loss had been assumed to be small, but the new research has shown that they will migrate farther inland over the next half century, potentially altering the ice sheet flow in dramatic ways.

Dr. Amber Leeson, member of the Centre for Polar Observation and Modelling (CPOM) team at University of Leeds, who led the study, said, "Supraglacial lakes can increase the speed at which the ice sheet melts and flows, and our research shows that by 2060 the area of Greenland covered by them will double."

Supraglacial lakes are darker than ice, so they absorb more of the Sun's heat, which leads to increased melting. When the lakes reach a critical size, they drain through ice fractures, allowing water to reach the ice sheet base which causes it to slide more quickly into the oceans. These changes can also trigger further melting. 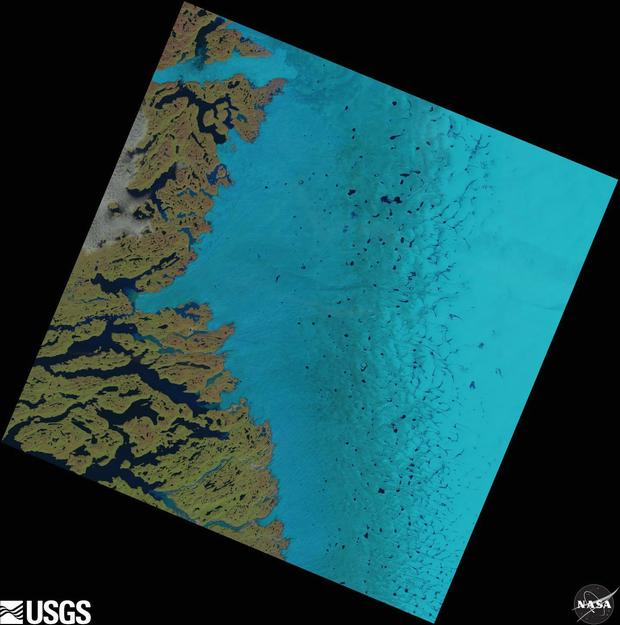 Supraglacial lakes on the Greenland ice sheet can be seen as dark blue specks in the center and to the right of this satellite image. Credit: USGS/NASA Landsat

Until now, supraglacial lakes have formed at low elevations around the coastline of Greenland, in a band that is roughly 100 km wide. At higher elevations, today's climate is just too cold for lakes to form.

In the study, the scientists used observations of the ice sheet from the Environmental Remote Sensing satellites operated by the European Space Agency and estimates of future ice melting drawn from a climate model to drive simulations of how meltwater will flow and pool on the ice surface to form supraglacial lakes.

Leeson explained, "When you pour pancake batter into a pan, if it rushes quickly to the edges of the pan, you end up with a thin pancake. It's similar to what happens with ice sheets: the faster it flows, the thinner it will be. When the ice sheet is thinner, it is at a slightly lower elevation and at the mercy of warmer air temperatures than it would have been if it were thicker, increasing the size of the melt zone around the edge of the ice sheet."

Since the 1970s, the band in which supraglacial lakes can form on Greenland has crept 56km further inland. From the results of the new study, the researchers predict that, as Arctic temperatures rise, supraglacial lakes will spread much farther inland - up to 110 km by 2060 - doubling the area of Greenland that they cover today.

Leeson said, "The location of these new lakes is important; they will be far enough inland so that water leaking from them will not drain into the oceans as effectively as it does from today's lakes that are near to the coastline and connected to a network of drainage channels."

"In contrast, water draining from lakes farther inland could lubricate the ice more effectively, causing it to speed up."

Ice losses from Greenland had been expected to contribute 22 centimeters to global sea-level rise by 2100. However, the models used to make this projection did not account for changes in the distribution of supraglacial lakes, which Leeson's study reveals will be considerable.

If new lakes trigger further increases in ice melting and flow, then Greenland's future ice losses and its contribution to global sea-level rise have been underestimated.

The Director of CPOM, Professor Andrew Shepherd, who is also from the School of Earth and Environment at the University of Leeds and is a co-author of the study, said, "Because ice losses from Greenland are a key signal of global climate change, it's important that we consider all factors that could affect the rate at which it will lose ice as climate warms.

"Our findings will help to improve the next generation of ice sheet models, so that we can have greater confidence in projections of future sea-level rise. In the meantime, we will continue to monitor changes in the ice sheet losses using satellite measurements."