News Staff
A tornado is a rotating column of air extending from a thunderstorm to the ground.  Tornadoes are capable of 250 MPH wind speeds, cutting a swath of destruction in excess of one mile width and dozens of miles in length.

If you see a dark, greenish sky or a wall cloud and hail, you might be getting a tornado.  If you have something that sounds like a freight train, you definitely are.

Tornadoes form in violent thunderstorms when there is sufficient instability,  meaning warmer and more humid than usual conditions in the lower atmosphere, and possibly cooler than usual conditions in the upper atmosphere, and wind shear present in the lower atmosphere.  Wind shear in this case refers to the wind direction changing and the wind speed increasing with height, e.g., a southerly wind of 15 mph at the surface, changing to a southwesterly or westerly wind of 50 mph at 5,000 feet altitude.

The wind shear and instability to create a tornado usually exists only ahead of a cold front and low pressure system, usually eastward-moving cold fronts. The intense spinning evident in a tornado is the result of the updrafts and downdrafts in the thunderstorm - caused by the unstable air - interacting with the wind shear, causing a tilting of the wind shear to form and upright tornado vortex.   Flowing air around the cyclone, already slowly spinning in a counter-clockwise direction (in the Northern Hemisphere), converges inward toward the thunderstorm, causing it to spin faster. This is the same process that causes an ice skater to spin faster when she pulls her arms in toward her body. 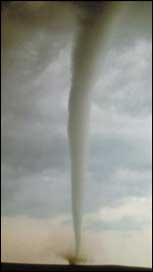 In the picture above, the tornado has formed on the boundary between dark clouds (the storm updraft region) and bright clouds (the downdraft region), showing the importance of updrafts and downdrafts to tornado formation.   Isolated storms or more likely to form tornadoes than squall lines, since an isolated storm can form a more symmetric flow pattern around it.

A tornado in Broken Bow, Oklahoma, carried a motel sign  to Arkansas - 30 miles away.  So Dorothy's house in "The Wizard of Oz" was not all that crazy.

A waterspout is a weak tornado that forms over warm water.

The United States has more tornadoes than anyplace else in the world - on average 800 each year.

95% of all tornadoes spin counter-clockwise (cyclonically).

It's a myth that windows should be opened during a tornado to equalize pressure inside the house.    In actuality, that just allows damaging winds to enter the house.  Just go to a safe place.
News Articles
More Articles All Articles
About