Better Living For Microbial Communities Thanks To The Power Of Chemistry
By News Staff | April 6th 2009 10:00 PM | Print | E-mail

Scientists have completed the first study of microbes that live within the plumbing of deep-sea mud volcanoes in the Gulf of Mexico, where conditions may resemble those in extraterrestrial environments and early Earth. The study was conducted in an area where clusters of seafloor vents spew mud, oil, brine and gases that support food chains independently of the Sun.

And it's about time.  Only about five percent of the world's oceans have been explored but the dark side of the moon has been throughly mapped.

A team lead by Samantha Joye of the University of Georgia managed to collect fluid samples from the crater of an active, bubbling mud volcano and from a brine pool that was previously a mud volcano. Brine pools are ponds of hyper-saline water that fill a seafloor depression without mixing with overlying seawater. These types of ecosystems--which have only rarely been studied by microbiologists or visited by anyone--are particularly hostile to much of life because they are devoid of light and oxygen, and are super-salty and bathed in noxious gases.

"Here we have more fascinating examples of microbial life coping with very, very unusual environments--regions of the ocean deeps that we can't help but describe as extreme or harsh," said Phillip Taylor, Head of NSF's Ocean Section. "Yet life has clearly adapted to exist, even thrive, in these systems. Such discoveries can't help but lead us to think that life beyond Earth is probable. Also, the discoveries of the evolved strategies for survival in unique environments have the potential to yield new uses of microbial processes and products in the biotech arena."

To reach the mud volcano and brine pool, Joye and her companions descended in a deep-sea research submersible to depths of 600 meters in the Gulf of Mexico. She describes her study sites, which are about 120 kilometers apart from one another, as feasts for the senses: "Near mud volcanoes, we saw thick plumes of gas bubbles ejected from boiling mud pots that are similar to those found in Yellowstone National Park. These gas plumes, consisting mainly of methane, extended hundreds of meters from the sea floor."

Bizarre phenomena abounded in the study area--from dancing eels that seemed to follow the window of the moving submersible, to a 50-foot wide volcano crater that was filled with a sulfur minerals and a reddish-colored microbial ooze. "These are the kind of scenes I imagine could exist on distant planets or other astronomical bodies," said Joye.

Conditions at mud volcanoes show tremendous short-term variation, with eruptions occurring daily to monthly to less frequently. What's more, the total lifespan of a mud volcano or brine pool is short by geologic standards--on the order of tens of thousands of years, rather than hundreds of thousands or millions of years. 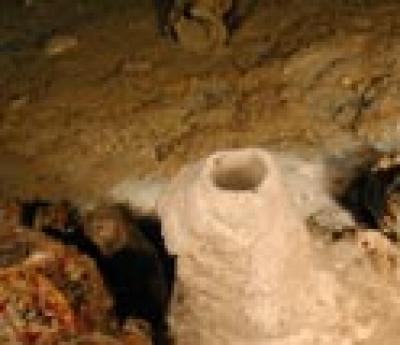 A mineral chimney and microbe mats on the sea floor in the Gulf of Mexico.  Photo Credit: Ian MacDonald, Texas A&M University

After a mud volcano goes dormant, its craters and depressions persist on the sea floor and may then fill with high-salinity, high-density fluid that has ascended, along with oil and gas, from underlying salt domes, where the water was chemically altered; a brine pool is thereby formed.

The Joye team also found that the depth distribution and magnitude of key metabolic processes conducted by the microbial communities are unique to each type of geologic feature. "The diversity and distribution of the microbes we studied say a lot about how life adapts to extreme environments," said Joye. "We believe that the composition of the microbial communities and their metabolisms are linked to environmental differences, mainly in the geochemistry and intensity and frequency of fluid expulsion between the sites," said Joye.

Selection of the Study Sites

Of all the world's unexplored marine environments, why did the Joye team choose to conduct their microbe study at the mud volcano and the brine pool? Because both environments are characterized by releases of gas and oil that are known to provide food and energy to microbes in deep, lightless environments where photosynthesis cannot occur. What's more, as Joye expected, the particularly harsh conditions created by the high-salinity of the brine pool selected for particularly well-adapted microbes that demonstrated distinct patterns of metabolic processes.

"The Joye team's study raises interesting and important questions," says Lita Proctor, an NSF Program Director. "For example, the Joye team's study has shown that these extreme environments can change rapidly. If these microbial communities are unique to each extreme environment, then how do the microbes that live in mud volcanoes reach and colonize these remote ecosystems in the first place or, for that matter, locate other mud volcanoes? Do they patiently wait in the ocean floor until a new mud volcano bursts through, or do they somehow migrate between mud volcanoes?"

These and other questions may be answered by future studies of these fascinating environments and help us understand how life on Early Earth may have evolved.