The colugo doesn't fly and is not a lemur but it's still called a "flying lemur" - and it's the champion of all gliding mammals, able to drop from the forest canopy in Malaysia, glide more than the length of two football fields, execute 90-degree turns and then alight gently on a tree trunk.

The colugo looks like a very large squirrel with membranous skin stretching from each limb and even between its toes to catch the wind and work as a parachute. When fully spread, the skin flaps reach the size of a large doormat.

Researchers are discovering how these animals move with the help of a miniature backpack outfitted with accelerometers. These devices, which measure acceleration, have motion-detecting technology similar to that in Wii remote controllers. 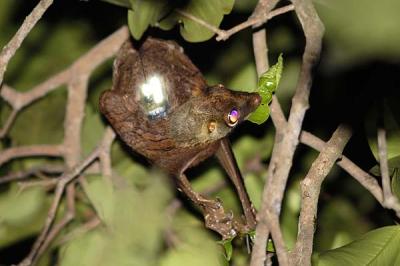 Can you see the little backpack on this colugo? Accelerometers and flash memory record several day's worth of data about its gliding, in particular take-offs and landings. The device is glued to a shaved area on the animal's back and falls off after a few days. Credit: Norman Lim/National University of Singapore

The researchers' findings not only are advancing understanding of the behavior and biomechanics of gliding animals ranging from ants and snakes to squirrels, but could also help improve the design of flexible winged aircraft such as hang gliders and micro air vehicles, they say.

"This makes them quite maneuverable," said first author Greg Byrnes, a graduate student in UC Berkeley's Department of Integrative Biology, noting that he has observed colugos gliding toward one tree and, seemingly changing their minds in midair, dodge around it and land on a different tree. "I've seen animals gliding and get to a place where foliage is dense, and they will actually collapse their membrane, haul through the leaves and then open up and glide some more. Obstacles are not much of an issue for them."

Its shyness, camouflage and nocturnal habits, however, make the colugo difficult to study, even though it lives comfortably in forested areas of big cities like Singapore.

Laboratory studies of gliding mammals, such as the North American flying squirrel, have given hints to how these animals leap and glide, but Byrnes and former post-doctoral fellow Andrew J. Spence, now at the Royal Veterinary College in England, wanted to study flying mammals in their natural habitat. They are particularly interested in the forces these animals exert during take-off and landing and how these forces depend on the gliding distance.

Luckily, accelerometers, which can indicate to researchers both force and speed, have become so small and cheap that Byrnes and Spence were able to make an instrument the size of a half a stick of gum - too big for a "flying" squirrel, but small enough to fit on the back of a colugo and record its acceleration on a small flash drive.

Colugos captured in forested areas of Singapore, including wild ones living at the Singapore Zoological Gardens, were fitted with this data logger and released to go about their business for a few days until the backpack fell off and could be retrieved. A radio tag on the backpack allowed Byrnes to track the location of the colugo every hour or so during the night and to locate the instrument after it had fallen off.

The recorded data showed that colugos push off from trees more forcefully for long jumps, but that they quickly reach terminal velocity once they spread their limbs into a parachute, so their landing force remains about the same no matter how far they glide. The landing forces increase with distance only for short leaps, a few times their body length of 75 centimeters, or about 30 inches, probably because they land with two limbs instead of four, the researchers said. Once all four limbs are spread out, however, the colugo may even get enough lift to land more softly the farther it travels. This fits with aerodynamic models, Byrnes said.

According to the authors, the colugo's ability to change its posture for aerial braking just prior to landing is "probably an important trait in the transition from leaping to gliding. It enables the gliders to reduce the impact forces in long glides, thus reducing the risk of injury."

Byrnes and colleague Norman T.-L. Lim of the National University of Singapore hope to continue their studies of the colugo's gliding behavior, concentrating on the biomechanics. Byrnes also hopes to work with advisor Robert Dudley, UC Berkeley professor of integrative biology, to reduce the size of the data logger in order to study the gliding of smaller mammals, in particular the American "flying" squirrel.

"We're interested in the effect of body size on gliding behavior, and 'flying' squirrels have a wider range of sizes than colugos," he said. "Gliding has evolved several times, so by looking at behavior in many species, we also can understand the evolution of gliding."

Byrnes also is collaborating with a University of Michigan graduate student who wants to use the backpack to study the reproductive behavior of regular, non-gliding tree squirrels in Canada's Yukon Territory.

"This tool can be applied to a lot of different animals," Byrnes said.

The team reported its findings this week in Proceedings of the Royal Society B. Conducted with support from the Singapore Zoological Gardens and UC Berkeley's Department of Integrative Biology.