News Staff
One of the smallest dinosaur skulls ever discovered has been identified and described by a team of scientists from London, Cambridge and Chicago. The skull would have been only 45 millimeters (less than two inches) in length. It belonged to a very young Heterodontosaurus, an early dinosaur. This juvenile weighed about 200 grams, less than two sticks of butter.

In the Fall issue of the Journal of Vertebrate Paleontology, the researchers describe important findings from this skull that suggest how and when the ornithischians, the family of herbivorous dinosaurs that includes Heterodontosaurus, made the transition from eating meat to eating plants.

"It's likely that all dinosaurs evolved from carnivorous ancestors," said study co-author Laura Porro, a post-doctoral student at the University of Chicago. "Since heterodontosaurs are among the earliest dinosaurs adapted to eating plants, they may represent a transition phase between meat-eating ancestors and more sophisticated, fully-herbivorous descendents." 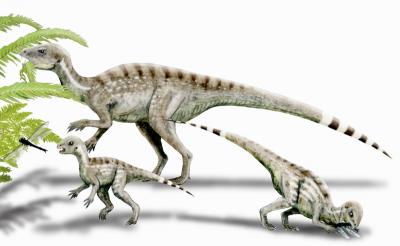 The teeth suggest Heterodontosaurus practiced occasional omnivory: the canines were used for defense or for adding small animals such as insects to a diet composed mainly of plants.  Credit: Natural History Museum

"This juvenile skull," she added, "indicates that these dinosaurs were still in the midst of that transition."

Heterodontosaurus lived during the Early Jurassic period (about 190 million years ago) of South Africa. Adult Heterodontosaurs were turkey-sized animals, reaching just over three feet in length and weighing around five to six pounds.

Because their fossils are very rare, Heterodontosaurus and its relatives (the heterodontosaurs) are poorly understood compared to later and larger groups of dinosaurs.

"There were only two known fossils of Heterodontosaurus, both in South Africa and both adults," said Porro, who is completing her doctoral dissertation on feeding in Heterodontosaurus under the supervision of David Norman, researcher at the University of Cambridge and co-author of the study. "There were rumors of a juvenile heterodontosaur skull in the collection of the South African Museum," she said, "but no one had ever described it."


As part of her research, Porro visited the Iziko South African Museum, Cape Town, to examine the adult fossils. When she was there, she got permission to "poke around" in the Museum's collections. While going through drawers of material found during excavations in the 1960s, she found two more heterodontosaur fossils, including the partial juvenile skull.

"I didn't recognize it as a dinosaur at first," she said, "but when I turned it over and saw the eye looking straight at me, I knew exactly what it was."

"This discovery is important because for the first time we can examine how Heterodontosaurus changed as it grew," said the study's lead author, Richard Butler of the Natural History Museum, in London. "The juvenile Heterodontosaurus had relatively large eyes and a short snout when compared to an adult," he said, "similar to the differences we see between puppies and fully-grown dogs."

A specialist on the mechanics of feeding, Porro was particularly interested in the new fossil's teeth. Heterodontosaurs, which means "different-toothed lizards," have an unusual combination of teeth, with large fang-like canines at the front of their jaws and worn, molar-like grinding teeth at the back. In contrast, most reptiles have teeth which change little in shape along the length of the jaw.

Porro and colleagues found that the juvenile already had a fully-developed set of canines.

"The fact that canines are present at such an early stage of growth strongly suggests that this is not a sexually dimorphic character because such characters tend to appear later in life," said Butler.

Instead, the researchers suspect that the canines were used as defensive weapons against predators, or for adding occasional small animals such as insects, small mammals and reptiles to a diet composed mainly of plants--what the authors refers to as "occasional omnivory."

The study created a new mystery, however. With the aid of X-rays and CT scans, Porro found a complete lack of replacement teeth in the adult and juvenile skulls.

Heterodontosaurus was more similar to mammals, not only in the specialized, variable shape of its teeth but also in replacing its teeth slowly, if at all, and developing tight tooth-to-tooth contact. "Tooth replacement must have occurred during growth," the authors conclude, "however, evidence of continuous tooth replacement appears to be absent, in both adult and juvenile specimens."

The research was funded by the Royal Society, Cambridge University and the Gates Cambridge Trust.
News Articles
More Articles All Articles
About