Nothing would make historic sites more fun to visit than a golf cart that drives itself, navigates around obstacles and lets you concentrate on enjoying the scenery.

If the 'Verdino' takes off, you just may have it. A team of engineers from the University of La Laguna (ULL) in the Canary Islands designed the Verdino and have demonstrated it as a self-steering vehicle that can sense the road surface using a technique called Ant Colony Optimization (ACO), based on the behavior used by ants to find the shortest way between their ant hill and sources of food.

The study’s lead author, Rafael Arnay, from the ULL’s Department of Systems and Automatic Engineering and Computer Architecture and Technology, say that the ACO algorithms are used to resolve “problems of combinatory optimization” and were inspired directly by ants. 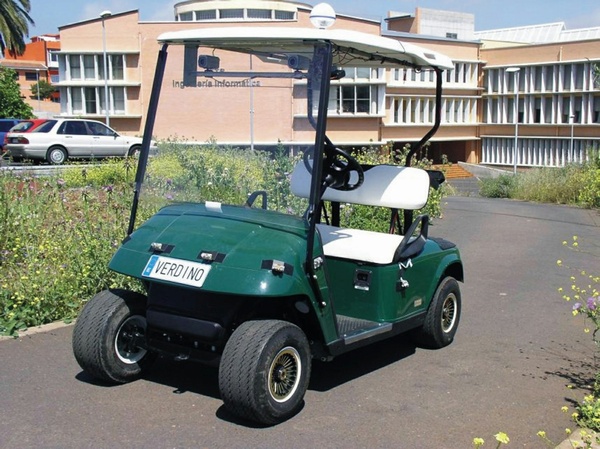 The Verdino uses 'ant colony optimization', the pheromone-based method ants use to track each other to food sources. The 'pheromones' the Verdino uses are artificial but the coolness is real.

In Nature, ants leave a trail of pheromones as they move, which can be detected by smell and followed by other members of the colony. The pheromones evaporate over time, which means that the path used by those ants that move to and from the food source over the shortest distance is the most deeply reinforced by these chemical substances, and so is the one chosen by the other ants.

“The ACO technique is based, similarly, on a colony of artificial ants, in other words computational agents that work cooperatively and communicate with each other by means of artificial pheromone trails,” explains Arnay. This technique has been chosen by Canary Island engineers to allow the Verdino to keep to the correct path along the road without the need for any driver.

The prototype looks like vehicles used on golf courses but it incorporates a camera that gathers the visual data necessary to apply the algorithms, as well as an internal control system that processes the data in real time. The Verdino is programmed to even travel along unstructured roads, those without lines painted on the surface or with irregular edges caused by encroachment by soil or vegetation.

The engineers are currently testing the Verdino to be used as an internal transport system linking 25 housing units and a visitor center in a bioclimatic housing development being built by the Technological and Renewable Energy Institute in the south of Tenerife, and they describe the first results as “very promising.”

The researchers believe the self-guided system could be commercialized and used in vehicles for places such as historical town centers, tourist complexes, exhibition or sporting venues, shopping centers and industrial parks. It could even be used within remote security systems or in adapted cars for elderly or disabled people.