News Staff
In recent Pew Survey data, 75 percent of moderate Democrats believe global climate change is a major threat to the well-being of the United States while 94 percent of Democrats who skew farther left believe that, up 30 percent from 2013.

This has translated into beliefs on policy. In 2015, 34 percent of Americans said Congress and the president must regard climate issues as a top priority, and that is up to 44 percent now. Among Democrats that was 67 percent versus 46 percent in 2015. Among Republicans, 21 percent say climate change should be a top priority, up only slightly from 2015's 19 percent.

The environment and climate change seem to be interchangeable for Democrats and that is translating into at least survey claims about how votes will get made. A survey last year found 82 percent of registered Democrats said the environment would be very important in their vote, up from 69 percent just two years earlier, while no Democrats in any meaningful range have ever said they would not vote for Democrats because of in-party resistance to GMOs, vaccines, or natural gas. So it isn't all science that is important.

It could also be they have successfully reframed the issue to appeal to their voters more. "Global warming" as a term did not resonate as well as more general "global climate change" among Democrats while the change in terms did not move Republicans all that much. 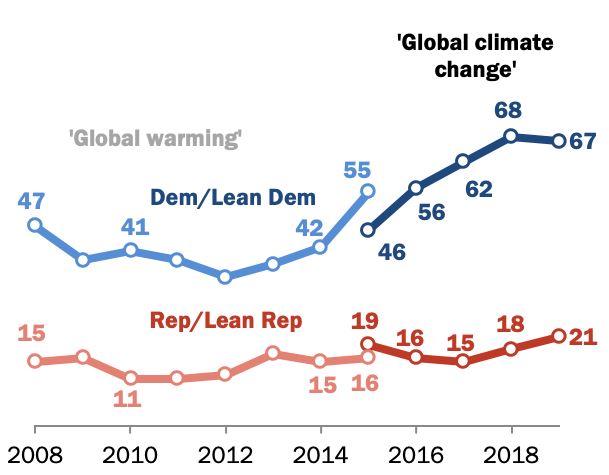 You can read about their methodology here.
News Articles
More Articles All Articles
About