News Staff
Black-eyed peas, a global dietary staple for centuries due to their environmental toughness and nutritional qualities, are small beans with dark midsections. In sub-Saharan Africa they remain the number one source of protein in the human diet.

Now it's gotten its genome decoded, a problem almost as tough as the legume itself.

A genome is the full collection of genetic codes that determine characteristics like color, height, and predisposition to diseases. All genomes contain highly repetitive sequences of DNA that University of California Riverside Professor of Computer Science Stefano Lonardi likens to "hundreds of thousands of identical jigsaw puzzle pieces." 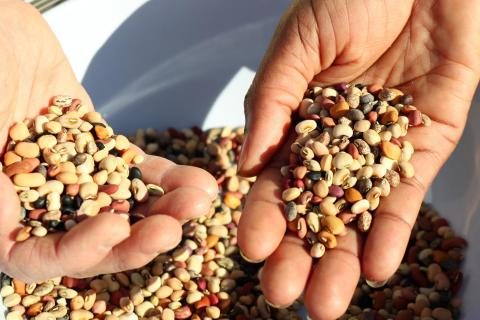 But they have done it and now black-eyed pea joins a handful of other major crops whose genomes have been fully sequenced.

As with humans, there are differences between individual black-eyed peas, a legume also known as cowpeas. Knowing which genes are responsible for qualities in individuals such as color, size, or pathogen resistance will help breeders develop new varieties even better able to withstand external challenges.  Having the genome sequence helps scientists make decisions about the choice of parent plants to crossbreed in order to produce their desired progeny.

One of the cowpea traits that scientists are now trying to understand is its remarkable ability to recover from drought stress.

Lonardi's software can be downloaded online free of charge.
News Articles
More Articles All Articles
About