News Staff
The Krebs cycle is named after Hans Krebs, who discovered it in 1937, part of the race to discover the central hub of cellular metabolism. In a cell’s mitochondria, it is a core part of the process by which cells “burn” sugars to make adenosine triphosphate (ATP), the cell’s energy-carrying molecule.

Mitochondria and the Krebs cycle were discovered in the race to find causes and treatments for cancer and those pathways are learned by every student. New research, published in the magazine that turned down the Krebs breakthrough that won him a Nobel Prize, says there is a complete alternative to this canonical cycle, also called the citric acid and tricarboxylic acid (TCA) cycle, with the downside the work is only in cells, not animals, so it remains exploratory.

Through several converging lines of evidence, the paper posits that an alternate version of the Krebs cycle takes place partly in the mitochondria and partly in the cytosol. Rather than burning sugar for energy, this alternate version allows cells to use the carbons in sugar to build important molecules such as lipids for cell membranes. 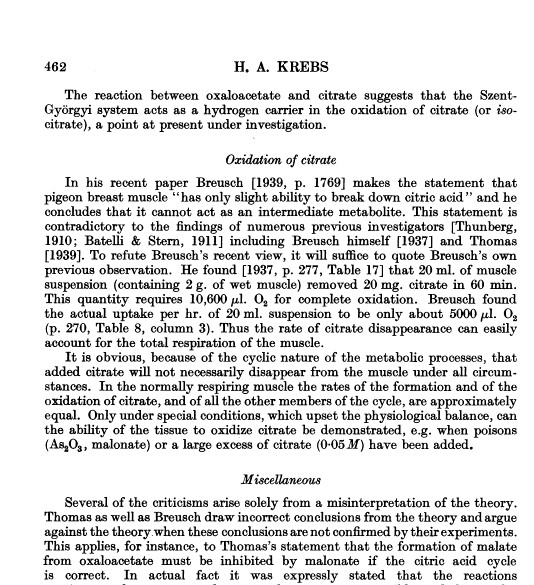 Not only that, but a cell’s use of one or the other version of the TCA cycle is associated with changes in its identity, the team found. The new results came out of a collaboration in the Finley lab between Gerstner Sloan Kettering graduate student Paige Arnold and Tri-Institutional MD-PhD student Benjamin Jackson. Arnold had been using carbon-tracing techniques to study the flow of carbons through the TCA cycle in different cell types. She had noticed, for example, that there seemed to be variation in the extent to which cells put their carbons into the TCA cycle versus skipping one part of it.

Around the same time, Jackson was using computational methods to analyze publicly available data from experiments in which the genome-editing tool CRISPR had been used to systematically knock out genes for various enzymes, one at a time, to see what effect this had on cells.

“You would hypothesize that if the TCA cycle were one functional module, then any one of those enzymes should have a relatively similar effect when you remove it,” Dr. Finley points out. “What Ben noticed is that’s not actually the case.”

“The metabolic enzymes seemed to form two separate modules,” Jackson says. “This backed up the anecdotal evidence that we were accumulating that there were different parts of the TCA cycle that cells could use or not use.”

The CRISPR studies Jackson analyzed were performed in cancer cell lines — in other words, cells that aren’t “normal.” Arnold wanted to know if normal also engage in this alternative or noncanonical cycle. The Finley lab often works with embryonic stem cells, so Arnold had easy access to these normal cells. Arnold traced the flow of carbons through them and found that they also engaged in the noncanonical TCA cycle.

These two sets of experiments seemed to confirm that there really was an alternate way to perform the TCA cycle, one that is not in textbooks. But why had Krebs missed it?

To try to answer that question, Arnold decided to review Krebs’ original papers from the 1930s and 40s. She found, to her surprise, that Krebs had made his pivotal discoveries in one particular type of tissue: pigeon breast muscle.

“Nobody really talks about that,” Arnold says. “But it made us wonder if maybe different cell types have distinct preferences for whether they use the traditional TCA cycle or this alternate version.”

She decided to reconstruct Krebs’ original experiments, only in a dish rather than in pigeon muscle. She used mouse stem-like muscle cells to grow a muscle fiber precursor called a myotube and then traced the carbons. When she did this, she saw something interesting: “When the cells were still in a more stem-like stage, they seemed to be doing a lot of this noncanonical TCA cycle, similar to embryonic stem cells and cancer cells,” Arnold says. “But as soon as the cells had differentiated into myotubes, they immediately switched to the more traditional TCA cycle. This is in keeping with what Krebs saw in pigeon muscle tissue.”

To the team, this result suggested a clear link between changes in cell identity and usage of particular biochemical pathways. To test whether the changes in cell fate required use of the different pathways, the team performed additional experiments in which they chemically or genetically blocked certain enzymes in the cycles and asked whether the cells could still change their fate. They could not. This finding implied that changes in cell fate required different biochemical pathways.
To Burn or To Build

Why would a cell opt for a different form of the TCA cycle at all? According to Dr. Finley, the Krebs cycle is really good at maximizing ATP production. It helps cells combust all their nutrients down to carbon dioxide.

“That’s great if what you really care about is making ATP,” Dr. Finley says. “But if you want to grow, ATP is actually not the limiting reagent. You actually need to retain those carbons to make new biomass. That’s what the noncanonical TCA cycle does: It allows you to take carbons from glucose and export them to the cytosol, where they can be used to build other molecules. So, instead of burning the carbon, you get to keep it.”

This growth-oriented cycle may have particular relevance to cancer, whose signature characteristic is unlimited growth.

Dr. Finley cautions that their laboratory experiments were all done in a dish rather than in animals. The team is keenly interested in understanding whether and when it occurs in vivo, both in normal animals and in tumors.

“That will help us know whether it might be a good cancer drug target,” Dr. Finley says.