News Staff
Anthropologists have long speculated about why neanderthals while Homo sapiens thrived? Was it some sort of plague specific only to Neanderthals? A cataclysmic event in their homelands?

A new paper in Anatomical Record posits that it was not some exotic pathogen, but chronic ear infections and plain old evolution. Ear infections are common in kids but how serious they are is a matter of debate. In parts of culture worried about both modern medicine antibiotic resistance, some parents believe an ear infection should just rest while a lot of older people with poor hearing believe kids should get them fixed. But killing off a species?

Nature finds a way and nature finds a weakness, and a reconstruction of the Eustachian tubes of Neanderthals concluded that they are similar to those of human infants - the same flat angle prone to retain the otitis media bacteria that cause these infections. 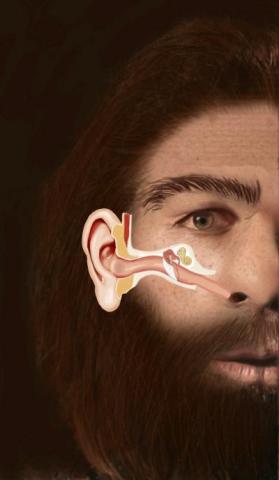 The structure of the Eustachian Tube in Neanderthal Man, similarity to the human infant, which angles by age 5. Image: SUNY Downstate Health Sciences University

Around age 5, the Eustachian tubes in human children lengthen and the angle becomes more acute, allowing the ear to drain, eliminating many of these recurring infections beyond early childhood. And prior to that there are antibiotics.

But unlike modern humans, the authors say, the structure of the Eustachian tubes in Neanderthals did not change with age - which means these ear infections and their complications, including respiratory infections, hearing loss, pneumonia, and worse, would not only become chronic, but a lifelong threat to overall health and survival.

"It's not just the threat of dying of an infection," said coinvestigator and Downstate Health Sciences University Associate Professor in Anthropology Samuel Márquez. "If you are constantly ill, you would not be as fit and effective in competing with your Homo sapien cousins for food and other resources. In a world of survival of the fittest, it is no wonder that modern man, not Neanderthal, prevailed."

"The strength of the study lies in reconstructing the cartilaginous Eustachian tube," said Richard Rosenfeld, MD, MPH, MBA, Distinguished Professor and Chairman of Otolaryngology at SUNY Downstate and a world-renowned authority on children's health. "This new and previously unknown understanding of middle ear function in Neanderthal is what allows us to make new inferences regarding the impact on their health and fitness."
News Articles
More Articles All Articles
About