News Staff
Though we convert fat, protein, and carbohydrates to make our common ATP energy currency, microbes have a far more diverse diet.

It turns out a new one can even digest organic compounds like ethane, the second most common component of natural gas.

In the seafloor of the Guaymas Basin at a water depth of 2000 meters in the Gulf of California, a new archaea named Ethanoperedens thermophilum ("heat-loving ethane-eater") has been discovered, and it can also convert carbon dioxide into ethane.

Some natural gas components such as propane or butane can be broken down by bacteria alone. However, in order to degrade the main components of natural gas - methane and ethane - two different organisms are necessary: Archaea, which break down the natural gas, and bacteria, which couple the electrons released in the process to sulfate, an abundant compound in the ocean. Studying the biochemical processes in the consortia in the laboratory has been extremely challenging up to now: These organisms grow very slowly and only divide every few months. Thus, there was always little biomass available. 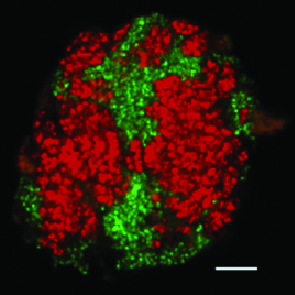 Laser-scan of the Ethanoperedens thermophilum (red) and its partner bacterium Desulfofervidus auxilii (green). For identification and visualization, the organisms are specifically stained with a fluorescence-labelled gene probe. The white bar corresponds to 10 µm. In the lab, consortia can reach up to several 100 µm in diameter. Credit: Max Planck Institute for Marine Microbiology/Cedric Hahn

It's different with the ethane producers that have now been discovered. They grow much faster, the cells double every week.

The researchers also discovered something else: The ethane degradation of this microbe is reversible. Thus, relatives of Ethanoperedens could produce ethane from carbon dioxide so they could be significant for the global carbon cycle and carbon dioxide concentration: They use ethane in the deep sea and prevent natural gas from reaching the atmosphere but they could also reduce CO2 by producing more natural gas, which burns far cleaner and lasts far less time in the atmosphere than CO2.
News Articles
More Articles All Articles
About