News Staff
A new study shows that supply chain cost increases coupled with inflation due to leaders just creating more currency are not new; they have been happening since ways to trade began.

Over 2,000 years ago, a ship carrying tons of rare metal sank in the Mediterranean Sea off the eastern shores of Uluburun — in present-day Turkey. It was located again in 1982, and since that time scientists have been studying the contents of the Uluburun shipwreck and one group believes small communities of highland pastoralists living in present-day Uzbekistan in Central Asia produced and supplied roughly one-third of the tin found aboard the ship — tin that was en route to markets around the Mediterranean to be made into coveted bronze.

The tin had traveled 2,000 miles, mostly of small-scale local communities or free laborers who negotiated this marketplace outside of the control of kings, emperors or other political organizations.  The mining regions of Central Asia were occupied by small communities of highlander pastoralists far from a major industrial center or empire. The terrain between the two locations, which passes through Iran and Mesopotamia, was rugged, which made it extremely difficult to pass tons of heavy metal. So they created a complex supply chain that involved multiple steps to get the tin from the small mining community to the Mediterranean marketplace. 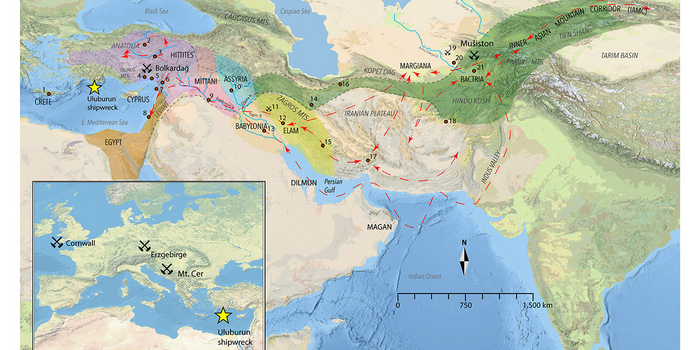 Tin from the Mušiston mine in Central Asia’s Uzbekistan traveled more than 2,000 miles to Haifa, where the ill-fated ship loaded its cargo before crashing off the eastern shores of Uluburun in present-day Turkey. Credit: Map provided by Michael Frachetti/Washington University in St. Louis

“It appears these local miners had access to vast international networks and — through overland trade and other forms of connectivity — were able to pass this all-important commodity all the way to the Mediterranean,” Frachetti said.

Capitalism was the driver and bronze was the product. By 1500 B.C., bronze was the “high technology” of Eurasia, used for everything from weaponry to luxury items, tools and utensils. Bronze is made from copper and tin but copper is fairly common throughout Eurasia while tin was much rarer. The Uluburun ship yielded the world’s largest Bronze Age collection of raw metals ever found — enough copper and tin to produce 11 metric tons of bronze of the highest quality. Had it not been lost to sea, that metal would have been enough to outfit a force of almost 5,000 Bronze Age soldiers with swords.
News Articles
More Articles All Articles
About