News Staff
It's a surprise for Americans to learn that the U.S. has more open land than the entire continent of Africa, even though Africa is 3X the size of the U.S., and it is an even bigger surprise when people learn that, of all the area not covered by ice, half of the world's land remains wilderness.

The inventory of open land was conducted in 2017 and 2018 by the National Geographic Society but a new study says that the wilderness is getting more fragmented. That makes sense, but it's not a bad thing. If a new housing development goes up and a city designates a lake and surrounding marsh as protected, it can be called fragmented but it's better than being gone.

Using satellite-based mapping techniques to measure human impacts across the globe and to identify areas of lowest human pressure and highest potential for saving intact habitat, the authors found that while many low-impact zones are separated either by natural features (water, rocks, ice), half of all segments located in temperate forests, dry tropical forests or tropical conifer forests were within one mile of humans. 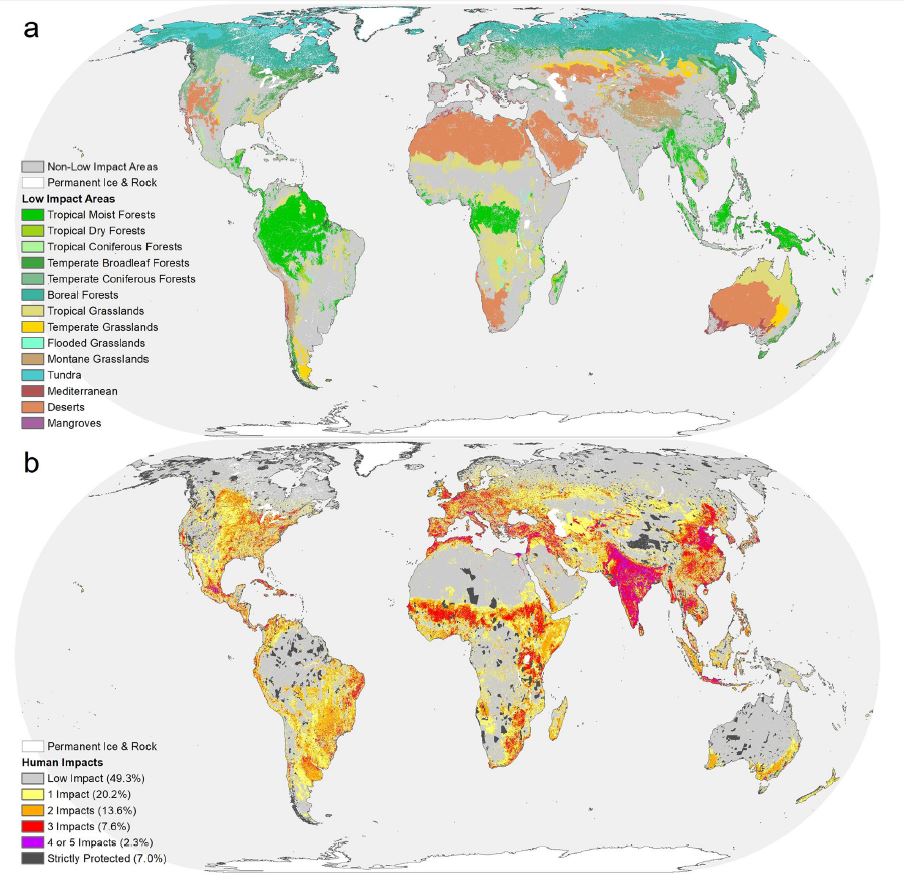 CLICK FOR FULL SIZE. (a) Global map of Low Impact Areas (color-coded by biome) and the surrounding human-dominated matrix in gray. (b) Global map of the intensity of human impacts.

Fragmentation can be confusing to ecologists, along with animals. There was outrage that a "northern White Rhino" was going extinct, until it was noted by biologists that it was not a separate species, there are 20,000 in the south - they are just separated because the three are in a protected park in the north. One author, a conservationist at UC Davis, lamented that animals are "exposed to pesticides" while seemingly not realizing that 99.9 percent of pesticides animals are exposed to are natural.
News Articles
More Articles All Articles
About