News Staff
The most popular pets are cats and dogs but their origins as human companions are much different. Dogs became domesticated during the ice age 23,000 years ago as humans and wolves co-habitated in tolerable refuge areas. Scavenging and then feeding by humans led to companionship.

Pet cats (Felis silvestris catus. Felis catus) are much more recent, and evidence shows they were allowed as pest control but gradually became companions as humans migrated and took cats with them. Like dogs, and unlike cattle and horses, there was a nexus for domestication; in the case of cats the Fertile Crescent, the areas of the Middle East surrounding the Tigris and Euphrates rivers.

A new work on the subject results from analysis of 200 different genetic markers of cat DNA in and around the Fertile Crescent area, as well as throughout Europe, Asia and Africa. 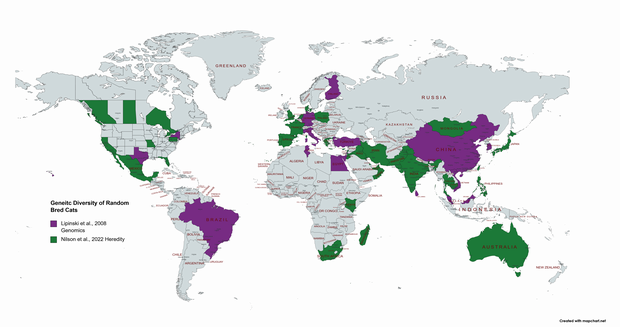 “One of the DNA main markers we studied were microsatellites, which mutate very quickly and give us clues about recent cat populations and breed developments over the past few hundred years,” says University of Missouri Professor Leslie Lyons. “Another key DNA marker we examined were single nucleotide polymorphisms, which are single-based changes all throughout the genome that give us clues about their ancient history several thousands of years ago. By studying and comparing both markers, we can start to piece together the evolutionary story of cats.”

Human migration then caused ‘isolation by distance’ and how the genetic makeup of cats in western Europe is now different from cats in southeast Asia.
News Articles
More Articles All Articles
About