News Staff
"Lag" is a common term for the latency in human-computer interactions caused by various factors related to the environment and performance of the devices, networks, and data processing.

There is no question it impacts the user's performance, and that impacts long-term usability, as the success of "Anthem" versus games like "Fortnite" show.

New technology helps game players maintain zero-latency performance and it was created by using a mathematical model for predicting players' behavior by understanding the effects of latency on players. This cognitive model is capable of predicting the success rate of a user when there is latency in a 'moving target selection' task which requires button input in a time constrained situation.

The model predicts the players' task success rate when latency is added to the gaming environment. Using these predicted success rates, the design elements of the game are geometrically modified to help players maintain similar success rates as they would achieve in a zero-latency environment. In fact, this research succeeded in modifying the pillar heights of the Flappy Bird game, allowing the players to maintain their gaming performance regardless of the added latency. 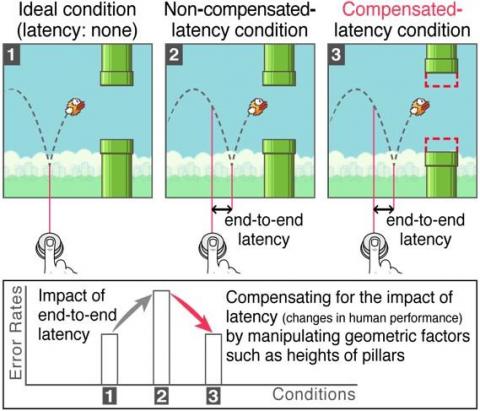 A prime example of self-modification depending on the infrastructure is Netflix. Though they have recently become known as a creator of content, that success became possible because they first developed a way for content to play even on slow, terrible connections.

The new technique developed at Korea Advanced Institute of Science and Technology (KAIST) does not interfere with a player's gaming flow, unlike traditional methods which manipulate the game clock by the amount of latency.
News Articles
More Articles All Articles
About