News Staff
Cannabis, known as marijuana in the U.S., Cannabis has been cultivated for millennia in East Asia and like many drugs exported from there to become one of the most widely used psychoactive drugs in the world today.

But now archaeologists have tracked down its earliest known use: 2,500-year-old funerary incense burners from the Jirzankal Cemetery in the eastern Pamirs.

Cannabis plants were cultivated in East Asia for their oily seeds and fiber from at least 4000 BC those early cultivated varieties of cannabis, as well as most wild populations, have low levels of THC and other cannabinoid compounds with psychoactive properties.  Like food, marijuana was optimized over time to increase the benefits people wanted, yet it has been unclear what it became popular for getting high.  While modern cannabis is used primarily as a recreational drug and claims of medical applications, cannabis may have been used rather differently in the past. The evidence from Jirzankal suggests that people were burning cannabis at rituals commemorating the dead. They buried their kin in tombs over which they created circular mounds, stone rings and striped patterns using black and white stones. 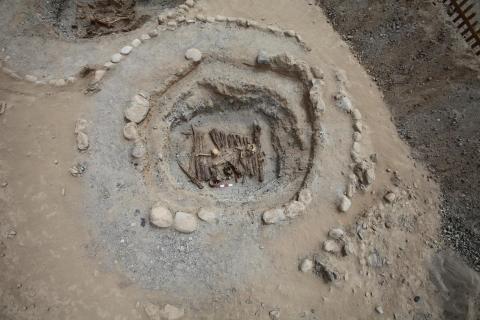 Tomb M12, in which the brazier was found. In the photo, the brazier can be seen at the middle bottom edge of the central circle. Credit: Xinhua Wu

A text from the late first millennium BC written by the Greek historian Herodotus  mentions cannabis smoking on the ancient Central Asian steppes but archaeologists have sought to identify evidence for cannabis smoking in Eurasia.

They found it when trying to identify the function of ancient wooden burners discovered by archaeologists from the Chinese Academy of Social Sciences, who were excavating in the high mountainous regions of eastern China. The burners were recovered from 2,500-year-old tombs in the Pamir mountain range. Using gas chromatography-mass spectrometry to isolate and identify compounds preserved in the burners, they found an exact match to the chemical signature of cannabis, with a higher level of THC than found in wild cannabis plants.

The data is clear evidence that ancient people in the Pamir Mountains were burning varieties of cannabis that had been engineered to have higher THC levels. 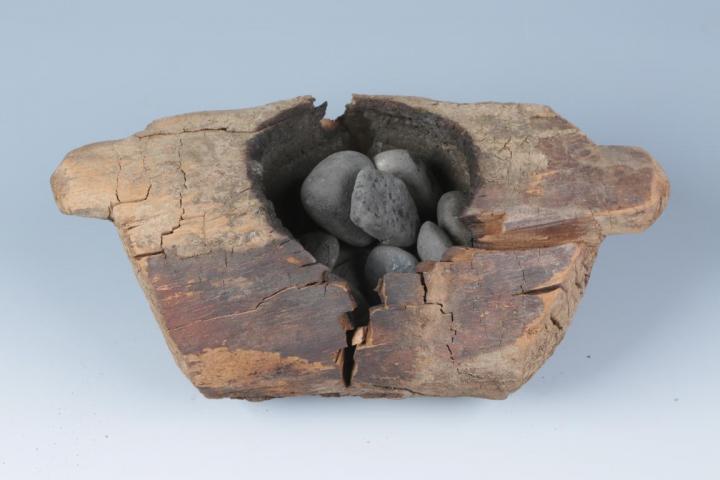 Once it got people high, it likely spread across exchange routes along the early Silk Road

The THC-containing residues were extracted from burners from a cemetery known as Jirzankal in the remote Pamir Mountains. Some of the skeletons recovered from the site, situated in modern-day western China, have features that resemble those of contemporaneous peoples further west in Central Asia. Objects found in the burials also appear to link this population to peoples further west in the mountain foothills of Inner Asia. Additionally, stable isotope studies on the human bones from the cemetery show that not all of the people buried there grew up locally.

These data fit with the notion that the high-elevation mountain passes of Central and Eastern Asia played a key role in early trans-Eurasian exchange. Indeed, the Pamir region, today so remote, may once have sat astride a key ancient trade route of the early Silk Road. The Silk Road was at certain times in the past the single most important vector for cultural spread in the ancient world. Botanist Robert Spengler from the Max Planck Institute for the Science of Human History, explains, "The exchange routes of the early Silk Road functioned more like the spokes of a wagon wheel than a long-distance road, placing Central Asia at the heart of the ancient world. Our study implies that knowledge of cannabis smoking and specific high-chemical-producing varieties of the cannabis plant were among the cultural traditions that spread along these exchange routes."

Wild cannabis plants contain lower levels of THC, the psychoactive compounds in cannabis that made it popular when fiber and oil did not, so did the people buried at Jirzankal actively cultivated cannabis or simply buy higher THC-producing plants? One notion is that cannabis plants will produce greater quantities of active compounds in response to increased UV radiation and other stressors related to growing at higher elevations. So people roaming the high mountainous regions may have discovered more potent wild plants there, and initiated a new kind of use of the plant.

Whether cannabis also had other uses in society is unclear, though it seems likely that belief in the plant's ability to treat a variety of illnesses and symptoms was recognized early on.
News Articles
More Articles All Articles
About