News Staff
If you get sleepy in the middle of hot days, you are not alone. You are not even alone in the animal kingdom.

Biology may be behind it.

We know that many people have a harder time sleeping in the summer and be slow to get out of bed on colder mornings and new study hopes to connect sensory neurons and neurons that control this cycle.

The work is only in fruit flies, so it goes in the exploratory pile despite the hyper-coverage such studies get in corporate media, but they found that fruit flies are pre-programmed to take a nap in the middle of the day. They believe there is a brain thermometer only active in hot temperatures. 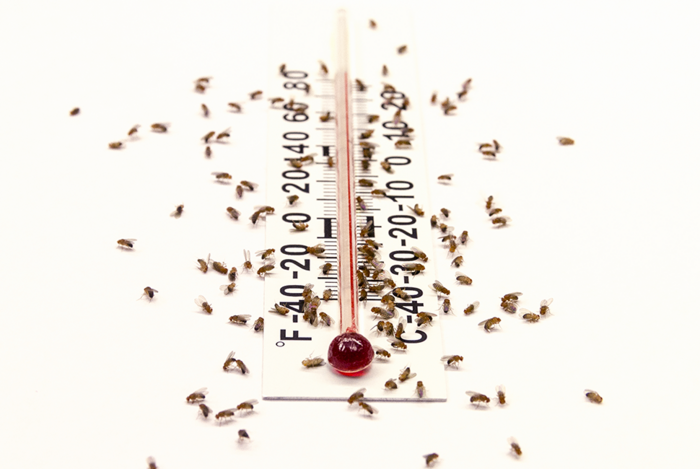 “Changes in temperature have a strong effect on behavior in both humans and animals, and offer animals a cue that is time to adapt to the changing seasons,” said Marco Gallio, associate professor of neurobiology in the Weinberg College of Arts and Sciences. “The effect of temperature on sleep can be quite extreme, with some animals deciding to sleep off an entire season — think of a hibernating bear — but the specific brain circuits that mediate the interaction between temperature and sleep centers remain largely unmapped.”

Gallio led the study and said fruit flies are a particularly good model to study big questions like “why do we sleep,” and “what does sleep do for the brain” because they don’t attempt to disrupt instinct in the same way humans do when we pull all-nighters, for example. They also allow researchers to study the influence of external cues like light and temperature on cellular pathways.
Cells that stay on longer

The paper is the first to identify “absolute heat” receptors in fly head, which respond to temperatures above about 77 degrees Fahrenheit — the fly’s favorite temperature. As it turns out, the common laboratory fruit fly (Drosophila) has colonized nearly the entire planet by forming a close association with humans. Not surprisingly, its favorite temperature also matches that of many humans.

Just as they expected based on the results of their previous paper on cold temperature, researchers found that brain neurons receiving information about heat are part of the broader system that regulates sleep. When the hot circuit, which runs parallel to the cold circuit, is active, the target cells that promote midday sleep stay on longer. This results in an increase in midday sleep that keeps flies away from the hottest part of the day.

The study was enabled by a 10-year initiative that produced the first completed map of neural connections in an animal (a fly), called the connectome. With the connectome, researchers have access to a computer system that tells them all possible brain connections for each of the fly’s ~100,000 brain cells. However, even with this extremely detailed road map, researchers still need to figure out how information in the brain goes from point A to B. This paper helps fill that gap.

The different circuits for hot versus cold temperatures make sense to Gallio because “hot and cold temperatures can have quite different effects on physiology and behavior,” he said. This separation may also reflect evolutionary processes based on heat and cold cycles of the Earth. For example, the possibility that brain centers for sleep may be directly targeted in humans by a specific sensory circuit is now open to be investigated based on this work.
Next steps

Next, Gallio’s team hopes to figure out the common targets of the cold and hot circuit, to discover how each can influence sleep.

“We identified one neuron that could be a site of integration for the effects of hot and cold temperatures on sleep and activity in Drosophila,” said Michael Alpert, the paper’s first author and a post-doctoral researcher in the Gallio lab. “This would be the start of interesting follow-up studies.”

Gallio added that the team is interested in looking at the long-term effects of temperature on behavior and physiology to understand the impact of global warming, looking at how adaptable species are to change.

“People may choose to take an afternoon nap on a hot day, and in some parts of the world this is a cultural norm, but what do you choose and what is programmed into you?” Gallio said. “Of course, it’s not culture in flies, so there actually might be a very strong underlying biological mechanism that is overlooked in humans.”
News Articles
More Articles All Articles
About