Let’s give a big shoutout to Gawker . They really stuck it to the Times by pointing out that their columnist Nick Bilton, who writes about technology, business, culture, and style (and should probably stick to... none of these?) ended up writing a Styles piece about potential health hazards of the new Apple Watch. This gives a new meaning to the expression "going down in style."

Bilton, already way over his head, tied a couple of extra cinder blocks around his neck by citing a “longitudinal study conducted by a group of European researchers” that links cell phone use to cancer, something that has been shown to be nonsense for quite some time.

I must confess that as a former chemist—a profession whose sartorial splendor has been not unfairly described as “people who dress as if they had run out of a burning hotel room”—that style is not my strong suit. But at least I don't write about it. So, why Bilton would be talking about a “longitudinal study” is anyone's guess, since he probably thinks that it has something to do with mapping the Aleutian Islands.

At least Bilton had the good sense to know that he needed some scientific input. But, with the unlimited resources of the Times at his disposal, his choice was roughly equivalent to going to a formal function at the White House wearing green leather pants, a mauve Nehru jacket, disco platform shoes and a parakeet on your head—the incomparable Joe Mercola, who I affectionately named “Crazy Joe Mercola” in a previous Science 2.0 piece.  (Non-Seinfeld watchers may want to watch this to understand the reference.)

Because if there’s a worse person to get medical advice from, good luck trying to find someone who can top Mercola.

His advice? “The radiation really comes from the 3G connection on a cellphone, so devices like the Jawbone Up and Apple Watch should be O.K., but if you're buying a watch with a cellular chip built in, then you've got a cellphone attached to your wrist. And that, he said, is a bad idea.”

The terms "Mercola" and "bad idea" go together like Abbott and Costello. Or Cheech and Chong. And if you want to read about a whole bunch of them, I suggest checking out what Dr. David Gorski has to say. His site, Science-Based Medicine, makes me sound kind. OK, maybe not.

From his column Respective Insolence today, “Even in the Style section, you'd think the editors wouldn't want to cite a quack as any sort of authority in medicine. I mean, seriously. Bilton ought to be ashamed, and the editors of the NYT ought to be mortified. Not only does he recycle every dubious cell phone-cancer trope out there, but he couples that misinterpretation of existing scientific evidence with quoting a quack who sells supplements.”

I wish he would tell us how he really feels.

Then, apparently, not knowing to quit when they're behind, Margaret Sullivan, the Times' public editor, writing in The Opinion Pages, seems to blame everyone except her employer, while at the same time allowing Bilton to add a Steinway Model D grand piano to the cinderblocks already tied around his neck.

Here are a few excerpts from her piece (obnoxious comments are free of charge):

"Nick Bilton writes a tech-related column called Disruptions, but the name might have been changed to Eruptions this week, given the way readers and others reacted."

Comment: So, it was the readers that caused this problem by overreacting. Shame on them for not just sitting there like turnips while science worthy of "The Beverly Hillbillies" was tossed at them.

"On the use of Dr. Mercola, he told me that his contribution was a relatively small part of the column. “He is one view among a dozen studies, articles and reports I cite in the column,”

Comment: Why use the opinion of one idiot when you can use that of many?

"Mr. Bilton also wrote to me: “The reality is, we still don’t know definitively the causes of cellphones and cancer, but I can tell you one thing, as a technology enthusiast myself, I approached this piece thinking all the research was bogus. But, as I noted in my column, after doing my own reporting on this topic, I’m no longer going to talk on my cellphone for long periods of time without a headset."

Comment: Bilton doesn't know the cause of either cancer or cell phones.

"On the matter of the column’s appearing in Styles, [Styles editor Stuart] Emmrich told me that he understood that serious topics such as this might seem jarring next to fashion and trend coverage. However, he said, the section has a “broad mandate” because it covers many aspects of how people live today."

Translation: "We need to talk about even more things that we know nothing about."

"Mr. Emmrich told me that, in retrospect, he would have done something differently: “run it by our colleagues in Science, who have been helpful in the past, just to confirm our reporting was on solid ground and perhaps to more directly address, preemptively, the criticism I expected might come.”

Translation: The guys in Science were busy with  the NCAA bracket pool.

"The column clearly needed much more vetting, at least some of which could have been done internally at The Times."

Guys, just admit it. You really stepped in it with both feet here. In evaluating the (non)issue of watches and harm, you turned to the worst possible source of health advice. Even a step below Dr. Oz, as impossible as that sound.

And if you really want to toss up your breakfast, this ought to do it: Which, if you think about it, isn't all that different from this: Since Mercola became the center of this mess, I thought it might be interesting to poke around his site to see what's in there. Here are two of my favorites: There are a few problems here:

The "daily value" has not been established because there isn't one

Silver does not dissolve in water, so the label is wrong

#2- Self is rather self-explanatory. Taken literally, one can only conclude:

1. Your dog has never taken a dump before this.

2. And if you don't buy the Starter Kit, he never will.

3. Poop bag futures on the Chicago Mercantile Exchange must have taken quite a hit in recent trading, cause that is one huge discount.

BUT- At least this product is useful: 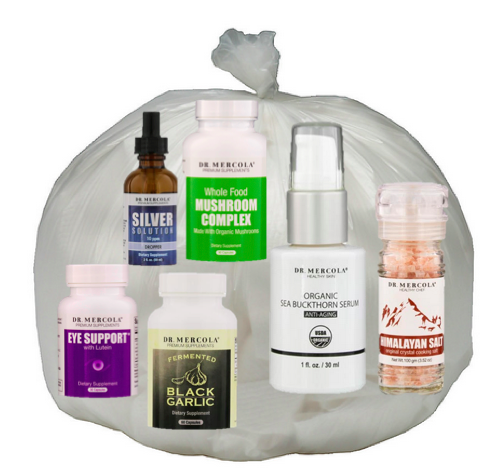