Josh Bloom
I am fortunate enough to own a small cottage on Fire Island.

The island is a barrier beach, located about five miles off the south shore of Long Island. It is a wonderful, unique place. There are no roads or cars. And no stress, which is especially astounding, since it is only 50 miles (and a short ferry trip) from Manhattan.

We may not have cars, roads or stress, but we have mosquitos— plenty of them.

The island is a 32-mile long sand spit, which is mostly undeveloped. There are 17 different communities, ranging in size from six houses to 600. Mine is called Ocean Beach, which is the largest, and one of two towns to have its own mayor and board of trustees. Among other things, this affords the village a certain amount of self-government, for example, opting out of the mosquito control program, which is run by the Suffolk County Department of Health.

Which we had done for at least 30 years.

So, during mosquito season, while people in other communities—not to mention huge swaths of Long Island and New York City—are able to sit on their decks and enjoy the evening, we suffer from the insect equivalent of Pearl Harbor. And it's not merely an annoyance.

Ocean Beach had been playing Insect Russian Roulette for three decades. In the summer of 2012 there was a bullet in the chamber.

The last thing my good friend and neighbor Jim Capuano needed was another health concern. Thanks to the miraculous drug Avastin, he was in good health six years following a diagnosis of stage 4 colon cancer. So, what happened next was especially appalling.


In August, Jim spent a week at his house. Like the rest of us, he was bitten alive. But most of the rest of us do not have a compromised immune system. Or maybe just lousy luck.


His last memory of that summer was returning to New York and not feeling well. His next memory was somehow waking from a medically induced coma 10 days later. Fortunately, his son was at home the next morning when Jim suffered a grand mal seizure, or he would have died.  Jim had contracted West Nile encephalitis during his vacation week. From a mosquito bite.


Jim is one tough SOB. After months of physical therapy he was OK. But, when I found out, I was not. I was furious—mostly at the village's environmental committee, which had been steadfastly opposing spraying for as long as anyone could remember. Since the village administration generally follows the committee's recommendation on these matters, while communities a few minutes away were being regularly sprayed by Suffolk County vector control, Ocean Beach was not. Their reasoning? "It's poison!" and "it will kill the spiders that eat the mosquitoes."


Not to belabor the obvious, but if the f####ing spiders were doing such a fine job of eating the mosquitoes, then we wouldn't be having this discussion, would we?


In the communities that were being sprayed, life was just fine. Birds were not dropping out of the sky. People were not growing arms out of their backs. No one was harmed. Why? Because the insecticide that Suffolk County uses is called Anvil, and if there is a safer "poison" out there, good luck finding it.


The following spring, in front of a village meeting I managed to control my tongue and temper as I explained the folly of our policy. Without explicitly calling the environmental committee idiots, I pointed out a few facts. For example, Anvil is actually less toxic than DEET, which you practically needed to power wash yourself with just to go outside after dusk. (In all fairness to them, this policy was instituted long before any of them were on the committee, but they continued to support it until I made a stink.)


Since a picture is worth 2,000 words (aphorism inflation) I handed out sheets containing safety data from the National Fire Prevention Agency (NFPA). (The NFPA has an enormous database containing safety information about a huge number of chemicals, both commonly used, and otherwise. This is used to determine approximate hazards in case of a fire or spill.)
The following is rather self-explanatory:

The blue diamond indicates toxicity, which ranges from 0 (water) to 4 (you are toast).

One thing that jumps off the page is that Anvil is in a lower toxicity category than DEET. Which begs the question, "Why would you spray more toxic stuff on yourself when you can spray less toxic stuff on the bugs?" There were no good answers to this.

After my spiel, Jim got up and told them what happened to him. That was the end of that. Except for a few granola heads, it was unanimous.The mindless policy of the environmental committee was doomed. Some of them looked like they wanted to load up a shotgun with Whole Foods organic sea salt and pump a few rounds into me.

Soon thereafter, the village changed its policy, and joined the Suffolk County mosquito eradication program. The summer of 2013 was blissfully mosquito free.


But, this year I was naturally concerned whether we would slip back to the misguided policies of the past. The good news is that we have not done so. The Suffolk County vector control program will continue to include Ocean Beach this year.

But not before it issued the following warning:

Steps you should take: Children and pregnant women should take care to avoid exposure when practical. If possible, remain inside or avoid the area whenever spraying takes place and for about 30 minutes after spraying. Close windows and doors and close the vents of window air-conditioning units to circulate indoor air or, before spraying begins, turn them off. Windows and air-conditioning vents can be reopened about 30 minutes after spraying. If you come in direct contact with pesticide spray, protect your eyes. If you get pesticide spray in your eyes, immediately rinse them with water. Wash exposed skin. Wash clothes that come in direct contact with spray separately from other laundry. Consult your health care provider if you think you are experiencing health effects from spraying.
Steps you may want to take: The materials used by Vector Control do not leave significant residues on surfaces, but exposure can be reduced even further. Pick homegrown fruits and vegetables you expect to eat soon before spraying takes place. Rinse homegrown fruits and vegetables (in fact all produce) thoroughly with water before cooking or eating. Bring laundry and small toys inside before spraying begins. (Wash with detergent and water if exposed to pesticides during spraying.) Bring pet food and water dishes inside, and cover ornamental fishponds during the spray period to avoid direct exposure.

Is this a safe product, or something Saddam Hussein was tossing at Iran in 1980?

Well, it's the former, but you wouldn't know this from reading that superlative example of government CYA.

So, I poked around a bit more, knowing that I could scream until I was blue in the face, but no one would really believe me if they read Suffolk County's DEFCON 1 warning.


Here's what I found. And if the irony of all of this happens to escapes you, drop me a line and I'll explain it.

Yes—what you are seeing is real. Anvil and sand have identical NFPA safety diamonds. And if there's a better way to screw with the heads of neurotic New Yorkers who live on a beach, I can't think of it.

But, on some level I can't blame them. It is hysteria-producing nonsense like this that leads any non-scientist to conclude that we are systematically being poisoned every day. The terms "chemical" and "toxin" are now essentially interchangeable, despite the fact that this is dead wrong.

Lest you think that chemical insanity is confined to a 32-mile beach, I happened upon something even crazier while doing my homework: California's Proposition 65.

I have written about this in the past, and if you are looking for an example of utter lunacy, look no further.

Proposition 65, aka The Safe Drinking Water and Toxic Enforcement Act of 1986 became law in California after a statewide vote (nearly 2:1 in favor). Its purpose was to keep icky things out of the water supply. Which is perfectly fine. But it turned into something rather different. Since enforcement of Prop 65 depends on civil suits against "violators," It has become a cottage industry "for private attorneys, some of whose businesses are built entirely on filing Proposition 65 lawsuits." Which means goodbye common sense. Which explains much of the rest of this.

The new law required that chemicals and other substances, which were deemed to be potential carcinogens or reproductive toxins be listed at least once per year. Anything manufactured, sold or used in California that contained anything on the list was required to be labeled: "This product contains chemicals known to the State of California to cancer and birth defects or other reproductive harm."

There are roughly 800 chemicals on the list, and many belong there. But some clearly do not.

And sand. No—I'm not kidding.

In fact, if you look up sand in the catalog of Sigma-Aldrich—the biggest supplier of research chemicals—you will find the following warnings:
Can't make this s###t up. Yes—next time you go to the beach (assuming that you ever find the courage to do so) make sure that you get special instructions for how to use the sand, don't breathe any of it, wear a gas mask, go to your doctor immediately after you leave the beach, and dispose of the entire beach in a locked, approved waste container.


Is it any wonder that everyone is scared of everything? But I guess this is what you get when you pay when you pay a lawyer $1,000 per hour to make sure that you won't get sued for not providing a "proper" warning for everything (and nothing).

Let's finish with some random observations:
So, I wish all of you a mosquito-free summer. And if you happen to want to risk your life by going to the beach, and somehow make it to the water without getting cancer, be careful. It's all over the news—there have been multiple sightings of great white sharks in the waters of Long Island this year.

Update: Summer 2014.  Jim Capuano and yours truly playing in the tenth annual Ocean Beach Softball Championship Tournament. We both pitched our hearts out, except I did *not* have to remove my chemo bag before heading out to the mound. We both got eliminated in the semis. Life ain't Hollywood.

Second (and very sad) update: November 2014.  Jim, having run out of therapy options, died after a long and impossibly difficult battle with this awful disease. I never heard him complain once during the entire time.  We will never see a finer example of composure, dignity, humor, tenacity and grace in the face of adversity, as evidenced by the more than 1,000 people that attended his funeral. Most of us were crying. 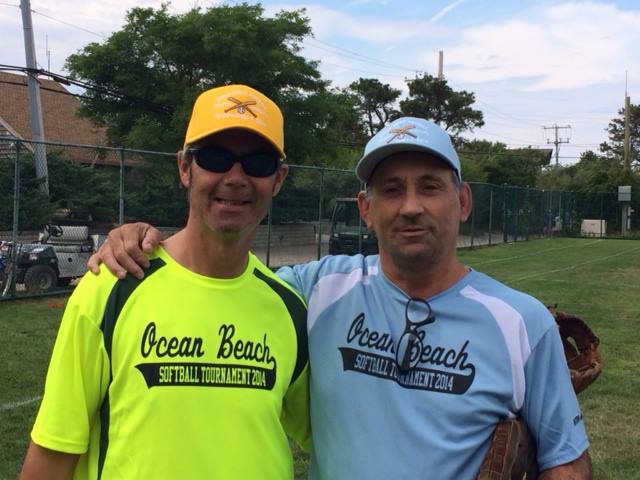