Josh Bloom
And I thought *my* job was fun.

I regularly get to ridicule an incredible variety and quantity of nonsense that poses as science and medicine. Some of it borders on hilarious.

On the other hand, making this stuff up is probably just as much fun, and maybe even more lucrative. There might even be an office pool: "Yo, Autumn Flower. I managed to get four old ladies to hide under the bed last week. Hand over the bitcoins."

And the competition must be fierce. In the absence of some kind of incentive, I cannot imagine any other way to get people to come up with a constant and creative (waste)stream of entertaining, yet marginally believable content.

Yet, they do. And it's not hard to find. Even a casual tour of the Environmental Working Group's website provides more than enough material that would be required to make all the uniforms for the North Korean army. Let's take look a list of some of their "chemicals of concern."

At the top of the EWG's "Dirty Dozen Guide to Food Additives" lies a horrifying chemical called theobromine. The name itself is rather inaccurate, since there is no bromine in the molecule and, to the best of my knowledge, it was not invented by anyone named Theo.

But it sure must be bad for you, since it an alkaloid (a nitrogen-containing chemical that is made by plants). Most alkaloids are rather respectable poisons, so it is not surprising that it must be pretty nasty. The EWG says, "[it] has effects similar to caffeine, and is 'generally recognized as safe' (GRAS) for use in a variety of foods, including bread, cereal and sport drinks."

The second set of quotes is not there by accident, since the EWG clearly thinks it is not safe. They accuse the FDA of "failing us" by allowing this abomination to be considered GRAS. How could it be, since they claim that it is "an additive" that causes "reproductive and developmental effects seen in animals?"

Sounds like if you want to avoid going under the bed, or maybe even under the ground, that you better stay the hell away from it. But to do so, you'd better avoid all of these: 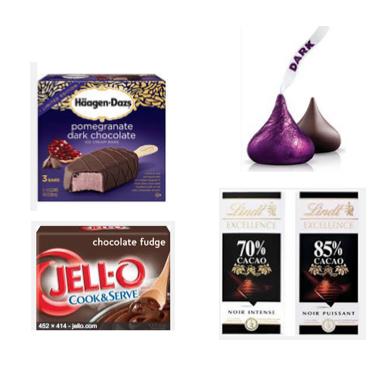 And what might these fine items have in common? You guessed it: chocolate. Which contains theobromine, as does cola, tea, and coffee.

If you want to live long enough to reach puberty (which might be never, since your "reproductive and developmental" functions will be screwed up) you really need to change your diet. Since chocolate and coffee both contain theobromine, you really need to avoid than the following: 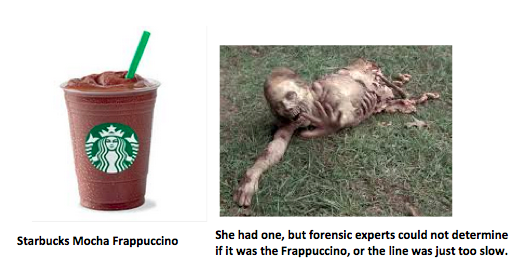 And I just couldn't live with myself if I didn't point this out: 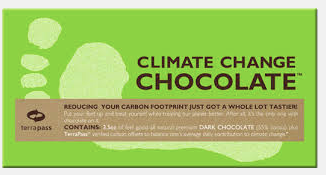 Is this the most obnoxious, gimmicky product ever? Eat this f####ing candy bar and the next thing you know there's a new ski resort in Barbados because of your reduced carbon footprint? Although, to be fair, it is not impossible they're on to something, at least in this one instance. While the unfortunate woman above isn't likely to be doing hosiery ads for a living, at the very least, she won't have to worry about her carbon footprint.
. 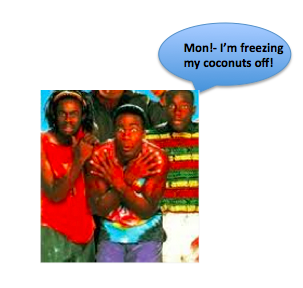 For all the headaches that the EWG causes, it is somewhat ironic that they don't think much of Tylenol (acetaminophen). They are not enamored with bottled water either, one reason being that it has Tylenol in it. Imagine swallowing a couple of Tylenol with a gulp of bottled water. Can death be far away?

How bad is Tylenol? Pretty hard to say, since their take on this is that the "effects of lifelong, constant exposure to this [sic] levels of acetaminophen are not known." I beg to differ.

Here is the amount to Tylenol that they imply that might be harmful because it hasn't been adequately studied: 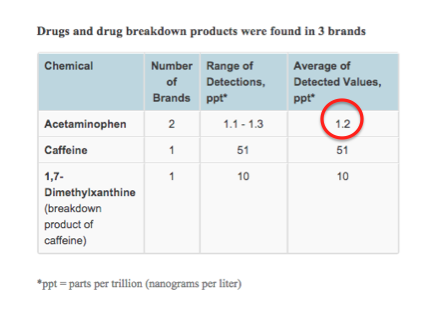 If one part per trillion (PPT) doesn't mean much to you, don't be alarmed. It doesn't mean much to me either, even though I spent an entire career dealing with potential toxicity of new drugs AND the concentration at which they might do harm, I've never even seen PPT used in any way. This is because this is such a low concentration that it approaches those "used" by practitioners of homeopathy, although, in this case, the concentration is zero. Feel free to read "Does This Cow Really Exist," should you have any interest in my feelings about this gobbledygook.

How much Tylenol is 1.2 PPT? Math is not a particular strength of mine, so if this it wrong, don't be too surprised. A concentration of 1.2 PPT is the same as 0.00000000012 percent. In a 16 ounce bottle of water, using one 500 mg (extra strength) pill as the standard dose, means (hopefully) that there is a whopping 0.00000000096 mg of Tylenol in the bottle. There is no poison on earth (or any other planet—even the one that EWG resides on) that will have even the slightest effect on you health (or anything else) at that dose. (FYI, Wikipedia demonstrates graphically what 1 PPT is: One drop of water diluted into 400 Olympic swimming pool—264 million gallons)

So the EWG doesn't know the long term effect of 0.00000000096 mg of acetaminophen on human health? Please. There are two possibilities: 1) They are lying; 2) They are incapable of making any rational judgements about anything even vaguely related to chemical toxicity.
Does it really matter? Nope. Either way, you are getting a load of crap. Perhaps you should keep this in mind the next time they come up with a scare.

Since I have a limited life span, especially after I ate that Snickers Bar yesterday, I'm going to have to wrap this up, but not before I point out one more idiotic scare from the group: oxybenzone—a chemical that is best known as an ingredient in sunscreen, but is found in many more products. The following is from their site:

EWG REALLY hates sunscreens. They either don't work well enough, or "work too well"—getting absorbed into your skin, short circuiting your reproductive system and destroying every living cell in your body. Here is their take on oxybenzone:

This must be some badass stuff, right?

Well, I think I'll go with Sloan Kettering on this one. Two of its researchers addressed the sunscreen "issue" in a 2011 paper entitled Current sunscreen controversies: a critical review.


Their findings:
There was a 23% increase in the uterine weight of rats that were fed oxybenzone.
Comment: Uh oh. If this doesn't prove how hosed we sunscreen wearers are, then what does? But, since just about everyone except homeopsychopaths (I REALLY hope this a new word!) knows that the dose makes the poison, might it not be relevant to wonder exactly how much the rats consumed? As a matter a fact, it is.

The oral dosage used to achieve the statistically significant increase in uterine weight was >1 500 mg/kg/day, an astronomically high dose.

Comment: How high is that? Pretty damn high. A female rat weighs about 400 grams, or 0.4 kg. So, >1,500 mg/kg (of body weight)/day means that in order to measure even a small change in uterine weight, the rats had to be fed 600 mg of oxybenzone — 1.5 percent of their body weight—per day for four days.


The equivalent weight in humans would be 0.105 kg (0.231 pounds). If I'm eating almost a pound of one of the ingredients in sunscreen over the course of a four-day period, my uterus is gonna be just about the last on my mind.


With these data in mind, it should be no surprise that the stuff is perfectly safe in humans: So, there ya go. And so does whatever shred of credibility that EWG has. They are trying to scare you about chocolate, a trillionth of a Tylenol in a bottle of water, and a perfectly safe sunscreen.


I'm going to suggest that perhaps the EWG is doing themselves a disservice by not using oxybenzone. It would seem like they've been out in the sun way too long. 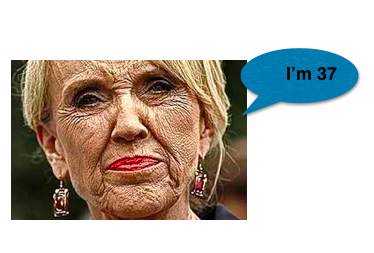