You just ate a bunch of poisonous stuff. Some of it was especially nasty, and I don't mean the cooking, rather, the chemicals in the food. Chances are that you are fine.

So am I, with the exception of sitting (mostly still) for two hours in a car with my mother (wonderful woman and I love her to death, but good lord, can she talk!) on the Long Island Expressway (LIE)—a misnomer if ever there were one—to attend Thanksgiving dinner.

The day was not lacking in stress. This is me channeling Lloyd Bridges: 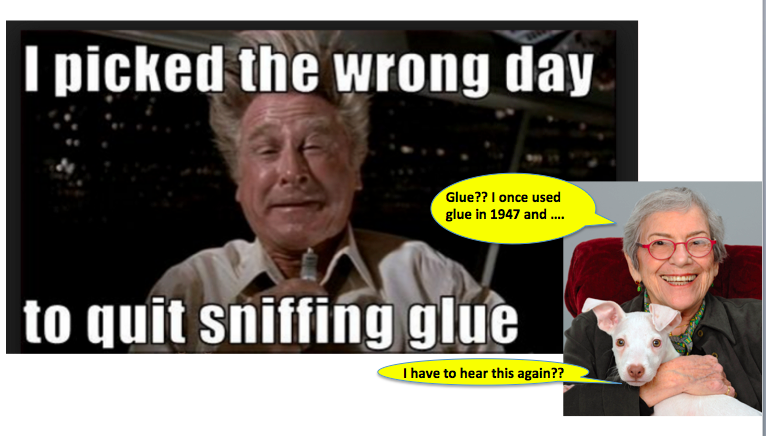 Airplane (1980)  Perhaps the funniest movie of all time:

It was a day full of risks. Some were worse than others: 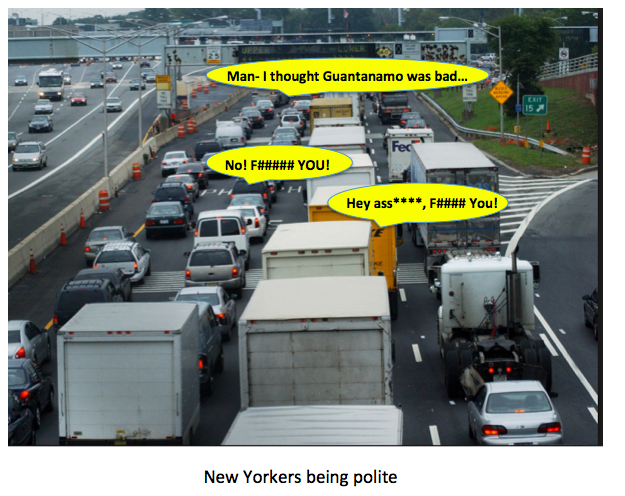 After 10 years in school, followed by 27 more in an organic chemistry lab, I got to play with thousands of chemicals. When you do this for a living, you learn pretty quickly what not to mess around with. (For a very entertaining and informative take on this, see Derek Lowe's blog "Things I won't work with." It is fascinating, and often hilarious. (Derek and I had essentially the same exact training, as well as profession: synthetic organic chemistry, then drug discovery research. He still does this for a living. Thanks to Pfizer, I do not. I also think he's more attractive.)

So, I thought I'd give a chemist's perspective on four of the many chemicals you just ate. They range from "Yo- Steve, toss me a bottle of acetone," to "Uh-oh. Chemist X is using chemical Y. Run:" Where X = the incompetent imbecile who is most likely to blow up the building, and Y = some nasty-ass stuff. There are far more X's out there than you'd think. Even more Y's.
So, here are four chemicals that you ate that I've used (reluctantly) in lab. No extra charge for juvenile comments:
*Pyridine- Found in coffee. Pretty decent poison if you breathe too much, but this is unlikely to happen because it smells horrible. May or may not promote sterility. Very commonly used in lab, and just as common to get a complaint from other labs near you. Standard complaint: "Who the f######k is using pyridine??"
*Acrolein- Turkey, chocolate, many others. Toxic as hell, and a carcinogen. While most chemists will tell you that it is synthesized from formaldehyde and acetaldehyde, they are wrong. I know for a fact that it was invented by Satan himself. No one likes working with it, but sometimes you have no choice.  It has a very unpleasant and distinct odor. Speaking of which...
***Acrolein funny story! While I was at Wyeth, there was a large common area freezer near my lab. No problem, except that a chemist that we'll call Dick (because he was just that) kept a poorly sealed bottle of it in the freezer, so my lab mates and I were smelling it (really awful) all the time. I asked Dick to seal it better, or get it the hell out of there. He was uncooperative. That is, until I took it out of the freezer and hid it under his desk. That worked, but there's a doozie of a safety violation for you. The safety imbeciles at Wyeth didn't have much of a sense of humor (or much of anything else, really), so I would have been fired for doing this had they known. Well, asshats, I'm already fired, and have an awesome job, while you are working at a muffler shop, so I confess. I DID IT! Whatcha gonna do? Fire me again?  Nyah, nyah!
*Acetaldehyde- Various fruits and vegetable.  Really toxic, carcinogenic. Hideous to work with. Extremely volatile, pungent and burns your nasal passages like crazy, even if you just get a little whiff, which you will, no matter how careful you are. Take one good snootful of this, and you'll wake up in Istanbul, having absolutely no idea how you got there. But, you are getting some every time you drink, since it is a metabolic product of alcohol. One of the reasons that you are driving the porcelain bus if you drink too much.
*Benzene- Very small amounts in turkey, meats, vegetables. Carcinogen! Benzene always scared the hell out of me, and with reason. It is set up to become an excellent DNA modifier (mutagen). For this reason, it has largely been replaced in labs by toluene, which is almost identical chemically, but not metabolically. The difference is one methyl group: 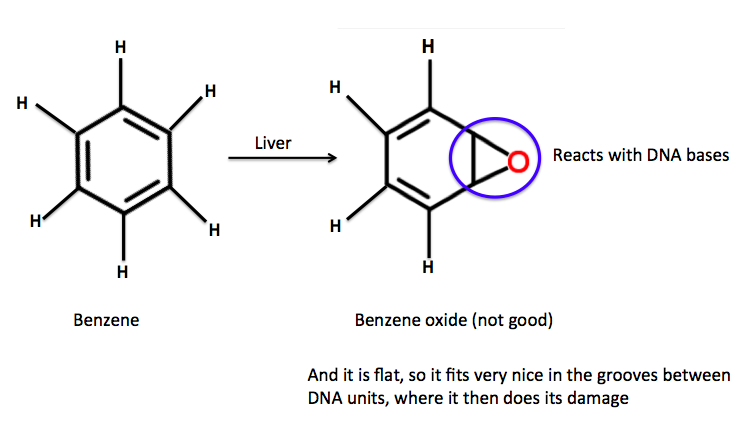 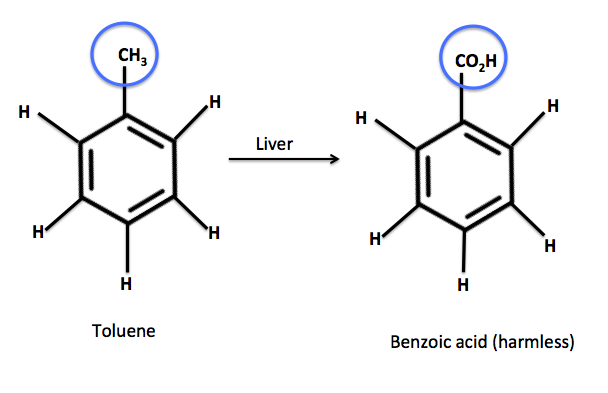 So, you just ate four chemicals that were either unpleasant to work with, or just plain scared the hell out of me (and this was working in a fume hood while wearing gloves), yet you are still leading the same wretched life you were living a week ago, as evidenced by the fact that you are reading this. How can this be so?
Duh. Because you only ate a little—something so fundamentally obvious that you would think that even the Environmental Working Group—not exactly the fastest decomposing potato skins in the compost heap—should know.
Well, as I wrote some time ago in "The Dopes Make the Poison," they don't. Or they intentionally don't, because to acknowledge this would be very bad for their business, which primarily consists of scaring people about tiny amounts of chemicals that are not even remotely as toxic as the ones you just ate.
That is, unless you ate a vegan turkey, in which case. all bets are off. That is something that is truly frightening. 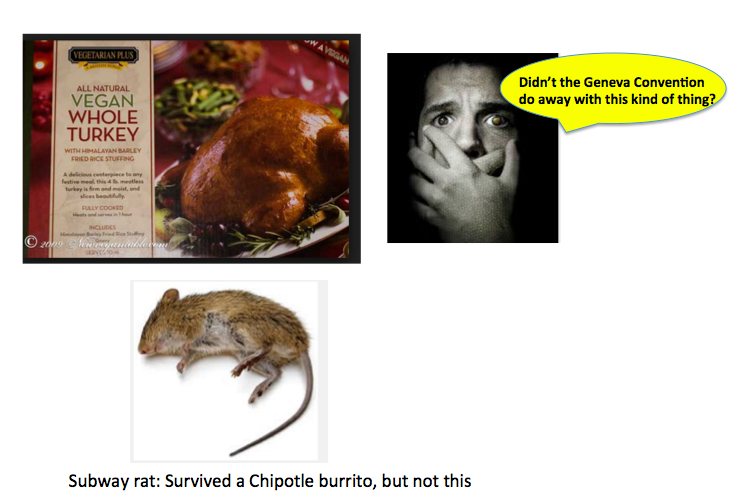