It’s always heartwarming when an elected official jumps on a hot topic, opens his or her yap, at which point very little resembling the truth comes out, and scores a few cheap points with the public. If this makes things worse, hey, no one is perfect. And it sure sounds good on the evening news.

The schmuck du jour is Peter Shumlin, the Governor of Vermont. He has a lot to say about narcotic abuse and addiction in his state. So much, in fact, that he is apparently willing to “bend” the truth just a teensy bit. And who would be surprised if he just happened to throw in a bit of irrelevant and incorrect information. After all, and he makes his point rather convincingly. Or does he?

Or perhaps it’s just self-serving garbage to get himself on TV. You decide.

Here’s an annotated breakdown of Shumlin’s own words from an op-ed that appeared in the New York Times on Sept. 21:

Shumlin:”A [year] and a half ago, I stood up before Vermonters and devoted my State of the State address to speaking about the opiate and heroin crisis affecting my state. Despite our best efforts since, this is not a battle we are winning.”

Reality: This is an unwinnable battle. At best it can be controlled. The US war on drugs has been an abject failure by any measure. Most recently, attempts to crack down on the use of narcotic drugs, such as hydrocodone, and oxycodone has served only to deprive patients with a real need of relief from severe pain, while driving former pill addicts to heroin en masse. My 2013 op-ed in the New York Post discussed just this and the following graph illustrates it quite clearly: 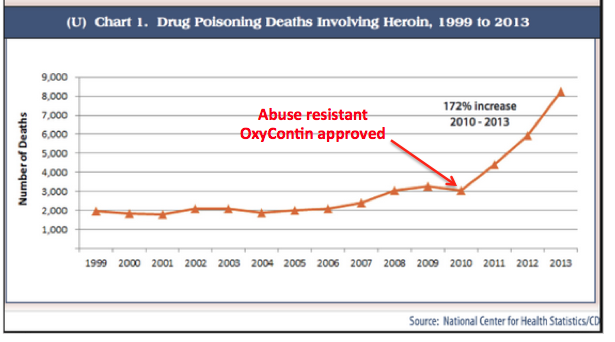 Here is what Shumlin had to say. Then, with the aid of the bullsh###ometer that I got from Hammacher Schlemmer (overpriced, of course) I translated it into something resembling reality.

Shumlin:“Now the Food and Drug Administration is recklessly making the problem worse with its decision to approve OxyContin for use by children as young as 11 years old.”

Reality: This is misleading, perhaps intentionally so. OxyContin has already been used in children, but off-label, which left doctors no choice but to make an educated guess about the best way to use it. By approving the drug at a children’s dose, the FDA is giving doctors official guidelines for its use.

Sharon Hertz, MD, director of the FDA’s division of anesthesia, analgesia, and addiction explained this: “I must stress that this program was not intended to expand or otherwise change the pattern of use of extended-release opioids in pediatric patients. Prior to this action, doctors had to rely on adult clinical data to shape their decision-making in treating pediatric patients. This program was intended to fill a knowledge gap and provide experienced healthcare practitioners with the specific information they need to use Oxycontin safely in pediatric patients.”

Shumlin: “We united behind the view that addiction is primarily a health care issue and that users need treatment, not prison cells. But Vermont continues to face the enormous personal and economic toll of drug abuse, just as the rest of the country does.”

Reality: Nice political soapbox crap, but irrelevant. The whole world is dealing with some sort of substance abuse problem or another. Equating this with a largely technical FDA decision is blatant pandering for political points.

Shumlin: “Our doctors and hospitals are examining their prescription practices to limit opiate distribution. Law enforcement and the families of addicts are carrying Narcan, which can reverse the effects of a heroin or opioid painkiller overdose. Recovering addicts are visiting schools to tell their stories to young Vermonters before they choose to use. Our treatment programs are expanding, and our acceptance and support of our addicted friends, co-workers, neighbors and family members is growing. Virtually everyone is committed to doing their part to end the vicious cycle created by drug addiction.”

Reality: Why does this sound like “I’m running for president?”

Shumlin: “Now is the time for the F.D.A. to be a partner in reducing — not expanding — the availability of these drugs. Instead, it is doing the exact opposite.”

Reality: This is simply a lie. They are doing nothing of the sort.

Shumlin: “While it is true that there are a small number of very ill children who may benefit from the extended-release nature of OxyContin, which allows for longer intervals between doses, the risks of approving this medication for kids are great.”

Shumlin: “It’s unfortunate but not all that surprising that the F.D.A. is ignoring the risks of making OxyContin more widely available.”

Reality: This is another lie, and a strange accusation. Does he really believe that the FDA has an ulterior motive for approving a kid’s dose for a drug that they are already using? What might that be? Maybe the FDA hates kids. Yep—that’s probably it.

Shumlin: “Along with the pharmaceutical industry, the F.D.A. lit the match that ignited the addiction crisis in this country when it approved OxyContin in the mid-1990s. The irrational exuberance with which painkillers were handed out following that approval is disturbing.”

Reality: This is a conspiracy theory that claims the FDA purposely got the nation hooked on drugs because….damned if I know. Yet for at least some politicians, bashing the pharmaceutical industry is as good a populist (albeit a bit stale by now) rallying cry as it gets. Sure, the FDA had a party, complete with strippers, to celebrate the long sought after goal of addicting the entire country.

Shumlin: “According to the Centers for Disease Control and Prevention, doctors in the United States prescribed enough painkillers in 2010 to ‘medicate every American adult around-the-clock for a month.”’

Reality: False equivalence. There are over 200,000,000 adults in the United States so that number means 16,000,000 may have had pain last year that warranted a prescription. Just in car accidents there are over 2,000,000 injuries and that does not count people who have chronic pain or a c-section or a surgery, it just assumes everyone who takes a pill becomes an addict. That is not true, even in Vermont.

Shumlin: “Many medical experts believe that there is no reason that powerful painkillers should be so prevalent in our society.”

Reality: We can find someone with a degree who believes HIV does not cause AIDS, vaccines cause autism and that GMOs cause cancer. What is harder to find are those with an alternative way to treat severe pain. Sorry, Vermont, your organic yogurt will not do it, nor will acupuncture or long-distance healing from the state capitol. Both aspirin, a non-steroidal anti-inflammatory drug (NSAID), and heroin, a narcotic, were invented in the 1800s. Our arsenal against pain in 2015 still consists primarily of NSAIDs and narcotics. More than 120 years after these discoveries, the fact remains that there is still no satisfactory pharmaceutical way to treat chronic, severe pain. Both the risks and benefits of treating pain remain high.

Shumlin: “Despite the mounting addiction disaster, the F.D.A. has apparently learned nothing. Just two years ago — the same year the C.D.C. reported that more than 16,000 prescription drug overdose deaths involved opioids — the F.D.A. approved a new painkiller called Zohydro over the objection of an advisory committee.

Reality: Misleading. Shumlin would have you believe that Zohydro (abuse resistant hydrocodone) was approved in the middle of an explosion of new prescription narcotic death. Except, CDC data tell a different story. At the time that Zohydro was introduced, deaths from prescription narcotics were actually dropping. Why? The abuse-resistant OxyContin. Which was, of course, accompanied by a near tripling of heroin overdose deaths (chart above). 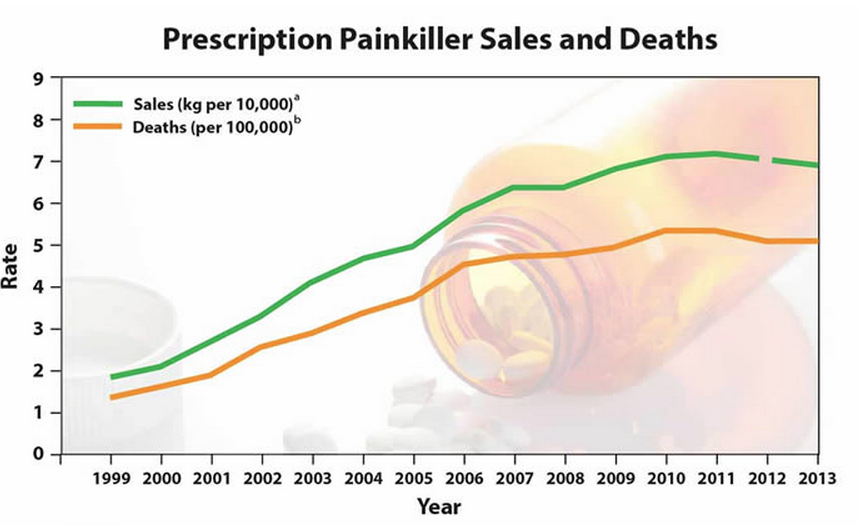 Shumlin: “Now the F.D.A. has taken it a step further by approving this poison for kids. When I think of the damage that will be caused by this decision, I think of Raina Lowell, a Vermonter who has shared her story of addiction as a cautionary tale at meetings and forums around the state.”

Reality: “Poison for kids??” You must be kidding. Governor, please shut the f…..... Couldn't you possibly give a a political speech be without a heart-wrenching anecdote about with kids?

The cherry on the sundae of this piece is that the New York Times already had to issue a correction because of how wrong Shumlin was:

“An earlier version of this article incorrectly characterized the legality of prescribing certain pain medication for use by children. Before the Food and Drug Administration approved the use of OxyContin by children ages 11 to 16 last month, physicians could use their discretion to prescribe the drug to that age group, for non-F.D.A. approved use. It was not illegal.”

In sum, addiction is a very difficult, intractable problem. It will never be “beaten” and it certainly won’t be helped by flowery speeches by out-of-touch, naive politicians. At best, we may be able to control it a bit better. But, such a complex problem will not be helped by simplistic government solutions that always have unintended consequences, or blathering politicians looking to score points by using misleading and inflammatory statements.

You can bet your 401K that all this will do is make an already-bad problem worse.

This has given me a headache. Time to scarf a Perc.

Originally published in modified form on the American Council on Science and Health. Read the original here.
Pfired but still kicking
More Articles All Articles
About