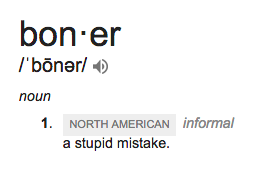 First of all, let me state that my conscience is perfectly clear:

However, unlike yours truly, if you have an impure mind I suggest you take it up with Merriam-Webster.

Having dispensed with that trivial distraction, can someone please explain to me what is going on below?

Why has this dragged out for five years? (Hint: it has little to do with science.)

Both headlines are referring to a "drug" called flibanserin, which has been in the news, well, forever. Until five years ago, the German pharmaceutical company Boehringer-Ingelheim was trying to get FDA approval for flibanserin—erroneously referred to as "Female Viagra"— as a treatment for hypoactive sexual desire disorder, a condition that results, among other things, in lower libido in women, especially as they age.

Flibanserin, has been in and out of the news for five years, which is about five years too long. That assumes that you actually know anything about drug discovery and development.

To understand why both the nickname, and the concept behind it, are wrong you need to know a little about real Viagra, and why it works.

First of all, male and female sexual disorders have absolutely nothing in common except for the name. They are physiologically and mechanistically a world apart.

Viagra, and the three other approved (and very similar) erectile dysfunction drugs, works by inhibiting an enzyme called phosphodiesterase type 5, aka PDE5. PDE5 is found in specific areas of the body, where it causes the smooth cells that line the inside of blood vessels to contract. When this process is inhibited, the cells relax, and blood flow improves. This is why Pfizer was trying to develop the drug, then called UK-92480, as a treatment for angina (chest pain) and high blood pressure.

It didn't work. Or so they thought. Then a strange thing happened. People didn't want to give the drug back.

UK-92480 later became Viagra, which was approved by the FDA in 1998. You know the rest. Like many medical breakthroughs, Viagra was discovered by accident.

Here's where things get a little messy. Since there are now drugs for male sexual dysfunction, shouldn't there be some for women as well? It's only fair, right? Sociologically, maybe so, but in the real world there is nothing "fair" about science and medicine.

Beohringer-Ingelheimm, the German pharmaceutical company, spent years trying to develop flibanserin to treat hypoactive sexual desire disorder, a condition that results in lower libido in women, especially as they age.  Hypoactive sexual desire disorder in women is in no way related to sexual dysfunction in men, except for part of the name. (Interestingly, flibanserin itself was also discovered by accident. It was intended to be an antidepressant.)

But the drug bombed, which is not surprising, since most drugs do. In 2010, the FDA voted 10-1 in to reject it because of lack of efficacy and concern about side effects. Beohringer lost interest, and in 2011 sold it to a startup company called Sprout Pharmaceuticals, which is "Dedicated to firsts in women's sexual health."

Sprout didn't fare a whole lot better. The company submitted additional safety and efficacy data only to have the FDA reject the drug—unanimously this time—in 2013.
So, why five years later are we still seeing the same failed drug in the news, even this week? Because this ain't about science. It's about what happens when activism, and politics get thrown into the mix.
The company was founded by Bob and Cindy Whitehead, (now the CEO) in 2011 solely to gain FDA approval for flibanserin. Ms. Whitehead, according the Sprout website, has worked for Merck, Elan, and Dura Pharmaceuticals. Sounds impressive, but she's not a scientist. She worked in marketing and corporate communications.
She is also not a mathematician, as evidenced by her statement there are 26 approved drugs for male sexual dysfunction and none for women. She is off by 22. Ms. Whitehead neglected to mention (notice?) that there are actually four approved drugs for erectile dysfunction. (I could even make a case that that the number could be counted as one, since they are all pretty much the same. If one doesn't work, neither will the others.)
(I have intentionally omitted hormone replacement therapy for men and women for the sake of clarity.)
The discrepancy arises from the fact that she counted the same drug multiple times. Identical drugs have different names in different countries. So, she either did not know this, or made an intentionally misleading statement.
Sprout lobbied Congress, as sure a way to screw up science as you could imagine, resulting in a letter from Rep. Debbie Wasserman Schultz (D-FL) to the FDA, from which I quote: "There are 24 approved medical treatments for male sexual dysfunction and not one single treatment yet approved for the most common form of female sexual dysfunction." Her math isn't so good either.

Sprout also recruited women's groups to put pressure on the FDA, and it reacted pretty much as expected.
From Terry O'Neill, the president of the National Organization for Women: "We live in a culture that has historically discounted the importance of sexual pleasure and sexual desire for women...And I fear that it’s that cultural attitude that men’s sexual health is extremely important, but women’s sexual health is not so important. That’s the cultural attitude that I want to be sure the FDA has not, maybe unconsciously, imported into its deliberative process.”

She must be kidding. Of the 9,999 potential drugs out of 10,000 that fail, this one is being held back by men's cultural indifference to women's sexuality?

Or could it be that it's simply a lousy drug?

Sprout hangs its hat on a study published in the Journal of Sexual Medicine. Even a quick look reveals several problems. One of them is safety. 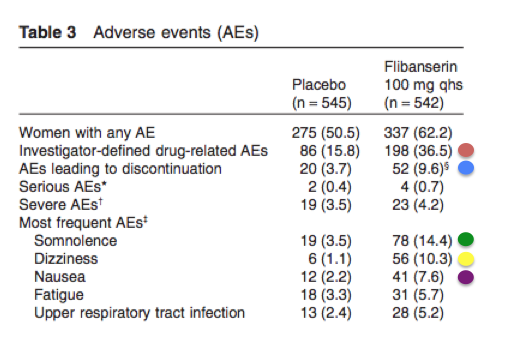 The red circle shows the percentage of all adverse events (AEs) that were identified by the clinicians who were conducting the trials. The women who took the drug had twice the number of AEs. The blue circle is possibly the most damning. Roughly three times the number of women who got the drug withdrew from the trial than those who got placebo. This is not trivial. The yellow and green circles represent the biggest safety concern of the FDA—impaired driving. Four times more women in the treatment group were sleepy, and 10 times more experienced dizziness. The gastrointestinal effects seem to be real as well. In fact, of the ten parameters of adverse effects, all 10 were worse in the women who received drug.

Does it work well enough to offset the adverse effects? Maybe. Maybe not. To some degree, it's a matter of semantics.

Virtually every statement released by the company (as well as this study)  places much emphasis on the fact that there was a significant improvement in sexual arousal, etc, in the women that took the drug. This is supported by the study data. The statistical significance (P value) of the data is excellent. A P value of 0.001 means that the chance of the data being mathematically artifactual, is extremely low—one chance in 1,000. This is about as good as it gets. There was clearly an effect.

But statistically significant improvement in a study is not the same as a significant clinical improvement. Yes, according to this study the drug works. But, note that the effects are modest. The five parameters on the left are various measurements of female sexual function, ranging from pleasurable experience to lack of distress. There are no 10 fold differences as was the case with adverse effects. The differences in efficacy are roughly in the 1.5-fold range.

Which brings up the exact same question that the FDA is faced with every time it decides whether a drug gets approved or not: Do the benefits outweigh the risks? The FDA has already said no three times. This should have been over with long ago.
At least someone gets it. Dr. Adriane Fugh-Berman is an associate professor at the Georgetown University Medical Center. She is also the director of Georgetown's PharmedOut program, which studies pharmaceutical marketing and prescribing practices.

Dr. Fugh-Berman said, “It’s not sexist for the FDA not to approve a drug that it doesn’t believe is effective or safe. It’s a classic marketing technique to first create a problem, and then sell the solution, and that’s what’s going on here.”

And that's not all. A group called Even The Score was formed  "[To ensure] that the same standards are applied to approve safe and effective treatments for the most common form of women’s sexual dysfunction as have been for men."

They have some math issues as well: "There are 26 FDA approved drugs to treat various sexual dysfunctions for men (41 if you count generics!), but still not a single one for women's most common sexual complaint.  You can see a list of all 26 individually evaluated and approved drugs for men right here, compiled from the FDA's own website. 26 v 0. That just doesn't make sense all these decades and scientific publications later."

Let's take it a step further. There have been more than 200 million prescriptions written for ED drugs. Estimating 10 pills per prescription, perhaps Even The Score could step up the hype even more. As long as you're going to miscount, you might as well do it with style:

"Two BILLION pills for male sexual dysfunction have been sold vs. zero for women!"

Just so the facts don't get in the way of the narrative, here they are:


In science and medicine there is no such thing as "fair." If there were, none of the graphs below would exist. 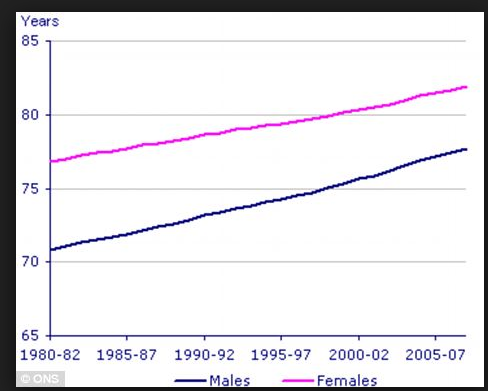 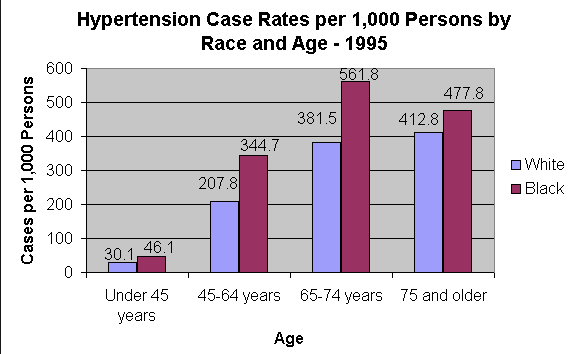 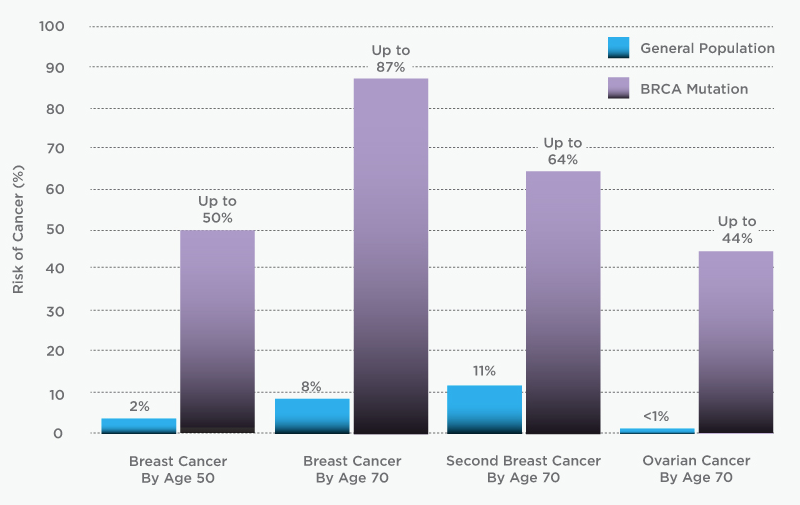 Women who are unfortunate enough to be born with mutations in the BRCA genes have a vastly higher chance of breast cancer.
None of this is fair. Neither is the lack of a sexual dysfunction drug for women. This is real life in the world of science and medicine. "Fair" has little meaning.
It takes luck, skill, perseverance, and money to come up with a good drug, and even with all four at hand, you still fail almost every time. It is the nature of the business. It can't be forced.
All the lobbying in the world won't turn a lousy drug into a good one. I can say with absolute certainty that that is fair.
Pfired but still kicking
More Articles All Articles
About