Ladislav Kocbach
I am taking part in discussions with Sascha Vongehr about the MIT video - here on this site -
Falling Faster Than Freefall: A Lesson In Didactics And Critical Thinking.

I have played with the problem in a toy simulator  ( see PHUN (download), scroll a bit down) and have fun..

One picture is worth thousand words, and I have about 20 animated. They show snapshots of a simulation of this fascinating little problem. It looks like a video, but there are about 16 different snapshots taken of a running PHUN toy simulator (the engine of it is no toy, though, it is very efficient toy, based on a PhD in computer science / numerical mathematics).

My little contribution (worth about 16 000 words, but much much shorter) is at our department local webserver (do not be afraid to click here, uib.no means University i Bergen, Norway) -
http://web.ift.uib.no/AMOS/faster_fall/Picture no. 209 (you can stop and type it into the text field) shows clearly that the end of the plank arrives before the ball, and is ahead a much longer distance than the original length of the golf tee.

The above address (http://web.ift.uib.no/AMOS/faster_fall/) contains links to the original MIT video, PHUN, and ALGODOO. I strongly recommend all the participants, as well as Sascha, to get PHUN for fun and understanding.

A new question was raised by Sascha: he claims that such simulations can be harmful to you, stopping you from what he calls critical thinking.

The whole problem of the plank and the ball discussed is naturally a trick question. If all bodies were falling freely, they would fall with the same speed (in the simulator I took away the air). So they are not all falling, the plank is mainly rotating. I have actually made a plank (in the simulator) which was rotating in such a way that the ball came down first, but that I hope to show here later. 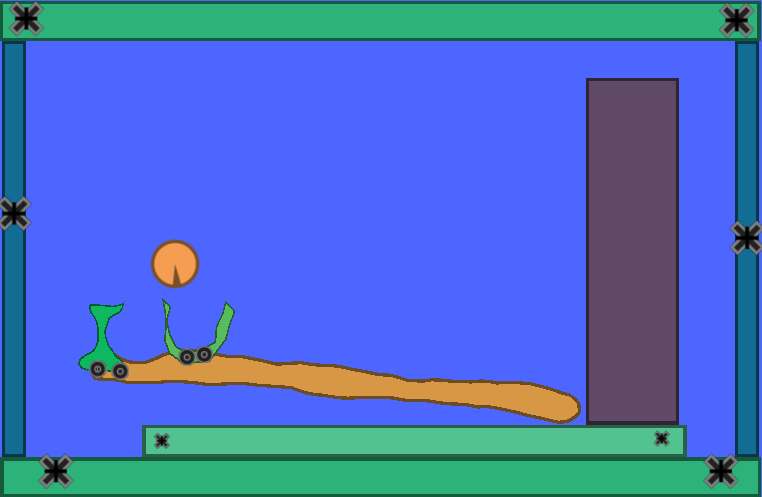 (animated sequence at the above address http://web.ift.uib.no/AMOS/faster_fall/.

The question I ask here is: are such simple simulators good for helping and developing our physics intuition (supplemented by both logical and mathematical elements at our level, whatever that is), or are they, as Sascha claims - hindering critical thinking. I quote:  There is absolutely no reason to use computers for this problem except if you want to ensure that your students do not develop critical thinking.

I think that critical thinking can be very well assisted by any experience, especially if it is positive. Playing with PHUN is a positive experience ( PHUN which was simply fun has been now surpassed by ALGODOO which also makes money - and fun).  And I do not get any money for recommending neither PHUN (which is free download for Linux, Mac and even Windows) nor the $30  ALGODOO.

It might not be clear what type of simulator PHUN really is. Here is a picture 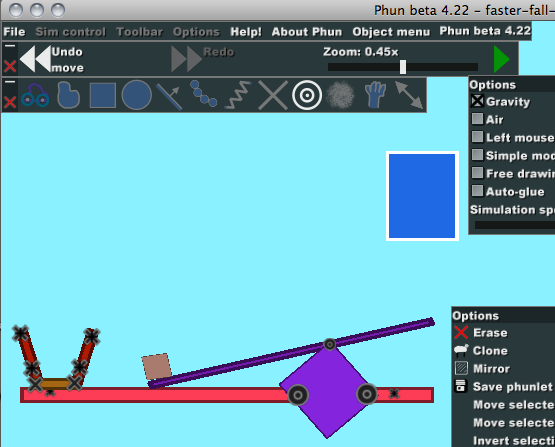 As you can see, it is a toy, but the motions of the objects are calculated and shown by a high quality simulation software. The scene I have put up here reflects my low "expertise", it does not look so nice. The block is going to fall, hit the bar, and the little block will fly and eventually end in the basket, but not allways. I can drop the block from different height, and simply play with this. Now the air is taken away, as you might notice from the menu. The objects and the scenes can be as big as your screen allows. The menus can be hidden or sometimes move around.

And in addition to such playing, you can use this toy to explore some simple physics ideas. You can make slow movies (simulation speed menu which you might notic as "Simulation sp" to the right). This is PHUN - version 4.22 beta. The one you can download will be probably 5.28 beta. If you do, we can exchange "phn" files, those are whole sceens.