Bente Lilja Bye
At the European Geophysical Union EGU, Jochen Zschau from GeoForschungZentrum GFZ in Germany presented his Sergey Soloviev medal lecture, Meeting the Challenge of Earthquake Risk Globalisation: Towards the Global Earthquake Model (GEM) on the first day of this huge gathering of geoscientific expertice. 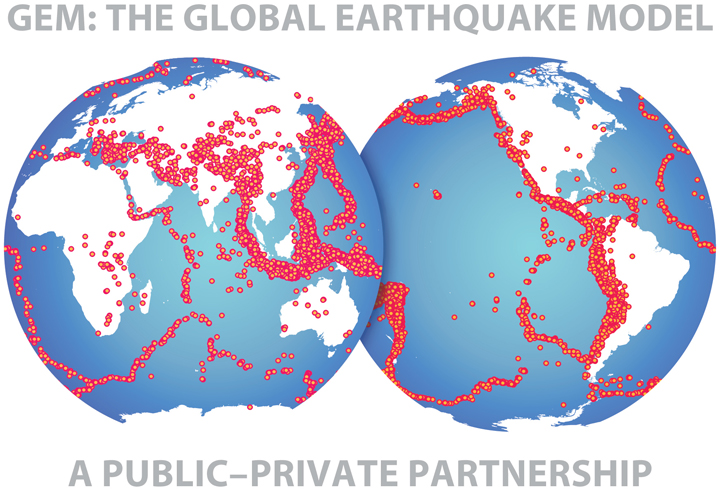 We would all like to reduce the material and human costs of natural disasters. Earthquakes can be devastating events with large socio-economic impacts and both national and international organizations allocate a substantial amount of resources to reduce the risks and mitigate disasters.

GEM is The Organization for Economic Cooperation and Development (OECD)
contribution to disaster management connected to earthquakes, a project that started 9th
March this year.

GEM aims to be the first global open source model for seismic risk assessment at a national and regional scale. GEM wants to integrate the forefront of earthquake science and engineering in three modules: Hazards, Risks and Economics.

There are several other initiatives on earthquake related hazards and disaster mitigations such as the UN's ISDR and International Tsunami Early Warning Systems as well as several national  nitiatives. As I mentioned earlier, I'm involved in a European Union funded research project called Tsunami Risk And Strategies for the European Region TRANSFER, yet another earthquake related activity with many overlaps with GEM.

As Director of the European Sea Level Service and a national adviser at Ministerial conference in Phuket after the Indian Ocean tsunami 2004, I learned that there is a sever lack of coordination among countries as well as international organizations. Even though OECD investment of an impressive 35 Million Euros over 5 year in GEM is a welcomed contribution to the life and material saving project on disaster mitigation, I can't help asking myself why their GEM is not better integrated and coordinated with the other major investments.

I fear that in spite of all the good will and interesting cooperation model (GEM is a pubic-private-partnership) we look at a double or triple investment in the same issues, sometime even with the same institutions but different people involved.

Either way, Jochen gave an excellent presentation and earthquake disaster mitigation is a topic we need to address with the rapid growth of megacities and hence increased risk involved.

Having said that, there are other natural hazards that are even more encompassing and potentially socio-economically expensive, yet perhaps not so spectacular as earthquakes. I promise to come back to this, in the mean time you can guess what kind of hazards I'm referring to, if you like. It is included in the program of the European Geophysical Union, too. :-)