Bente Lilja Bye
Right now we have a tandem situation. Jason-1 and Jason-2 are flying in tandem above our heads. Sounds like fun perhaps, but who cares? And who are Jason and what's with the numbers, anyways? 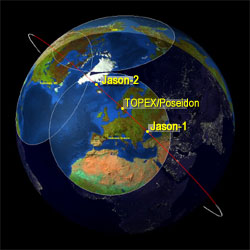 Credit: NASA
A "family portrait" of Jason-1, Topex/Poseidon, and Jason-2 for 28-Jan-09 at 23:39 UTC,
showing the position of all three satellites as they descend to the southeast, passing over ground station just outside of Toulouse, France.


Obviously we are talking about two distinct Jason's; Jason-1 and Jason-2. They are both satellites orbiting planet Earth carrying altimetry instruments. An altimeter measures the distance from the satellite, where the altimeter is placed, to the surface of the Earth. So the Jason-1 and Jason-2 satellite altimeters measure sea surface height. As you might guess, these satellites are useful tools monitoring changes in sea level, but there are other useful data coming out of these instruments as well.

The sea surface is not at all as smooth and even as we imagine. The oceans are all bumpy and change their bumpiness continuously. By scanning the sea surface height over large areas of the ocean over and over again we get both the real topography (bumpiness) of the oceans as well as their variations. Some of the features of the ocean surface reflect the topography of the ocean bottom, the vast unknown of this planet. Other features are results of climate change and other effects caused by the dynamic processes of the rotating Earth. 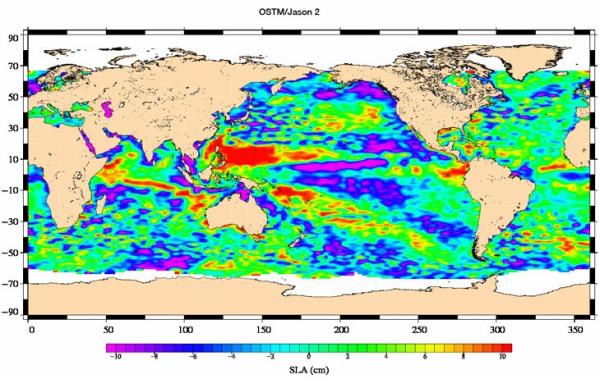 Credit: NASA/Jet Propulsion Laboratory
Jason-2 map of sea-level anomalies from July 4 to July 14, 2008.
Coming back to the tandem satellites Jason-1 and Jason-2 now. It is imperative that we have overlaps between these satellites in order to calibrate the collected data. If we do this right we will have much better and longer time series of for instance the changes of sea surface height and thereby the sea level rise. In the process of this calibration we also gain a much better resolution of the data and hence can see features such as smaller currents and eddies of the oceans that are lost with less spatial resolutions. The tandem simply gives us a sharper eye in the sky. 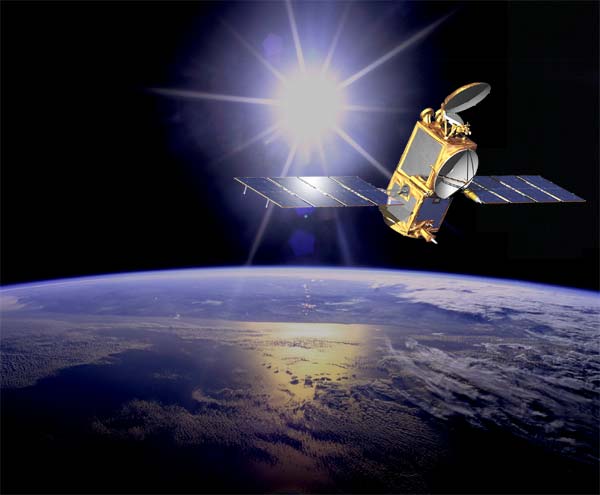 The Jason's are among the space geodetic tools we rely on to determine the shape of the Earth and its' continuous changes.

The adventure really started with the Topex-Poseidon satellite (you see it mentioned in the first illustration here between the two Jasons') As I said, it is imperative for long time series that we have satellite altimetry instruments continuously measuring the sea surface heights. The international science community has pulled together, struggling to convince the funding agencies that we cannot afford holes in the time series. It was a close call but we are already in the tandem phase now!

It is worth mentioning that this is a successful cooperation between Europe and the US in particular. The major organizations contributing to this mission are EUMETSAT and CNES in Europe and NASA and NOAA in the US, but there are numerous other contributors as well.
PlanetBye
More Articles All Articles
About