Bente Lilja Bye
NASA has got the hang of it now. Creating an almost unbearable suspense before the launching of a new satellite, that is. Actually, the last time NASA tortured us with excitement was in connection with a landing, and not a launching. I am of course referring to Curiosity's landing on Mars. That went well, to put it mildly. Both the 'show' and now the results that are ticking in from the mission. Currently it is drill baby, drill mode on Mars!

Back on Earth, today Landsat 8 is about to be launched. I will be following that live, and so should you. Adding to the experience, I thought I'd share with you some fun facts and reflections on the Landsat program, including telling you why Landsat 8 is a brilliant investment. 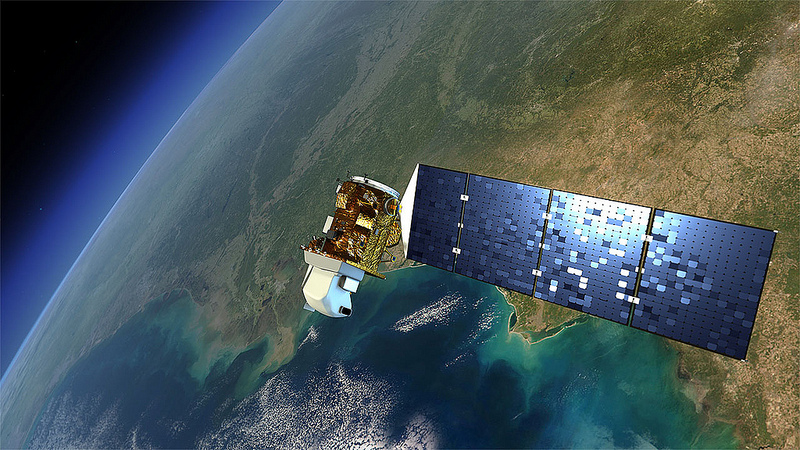 The Landsat 8 satellite and our planet. Credit: NASA

Brief history
The Landsat program started already back in 1972 so last year Landsat celebrated its 40th anniversary. The first satellite missions in the Landsat series lasted relatively short periods of time. They were certainly short if compared with the longest-operating Earth observation satellite, Landsat 5. In fact, this mission lasted so long it made it to Guinness Book of Records being in operation for 28 years and 10months.

Today's NASA mission goes under the name LDCM (Landsat Data Continuity Mission) but it will become Landsat 8 when USGS takes over the operation once it flies properly. It is a fantastic program and you will understand why in a bit.

Timeline showing the development and lifespans of the Landsat satellites. Credit: NASA

Turning Green Into Shades of Red
There is a whole suite of instruments on-board the Landsat 8 satellite. These instruments allow us to look at the Earth in different light (different frequencies); optical, several infrareds and blue-ultra all in all 9 different spectral bands. The spatial resolution has been improved in Landsat 8, but there are other satellites that has better spatial resolutions (GEO-eye for instance). However, is not the improved spatial resolution alone that makes Landsat 8 a better tool than the former Landsats, it is the combination of spatial, temporal, spectral and radiometric data that enthuse the scientists and that will result in tons of valuable new information about changes on our planet.

So what is it with the green turning into shades of red? If you have seen some of the Landsat images showing the scars after fires they are often colored red. The red is just what they use to represent the infrared wavelengths that the human eye cannot see. So they pick a color that we actually can see. I deliberately wrote wavelengthS because there are several wavelengths of infrared and sometimes one can distinguish different kinds of vegetation this way as they reflect different wavelengths.  This way one can for instance observe the variety of agricultural 'products'. If a farmer is changing between different crops, the age of the crop etc. it can be detected by Landsat.  In particular, it is the changes we observe that have the biggest value to us, not only in agriculture, but in many, many other societal areas. 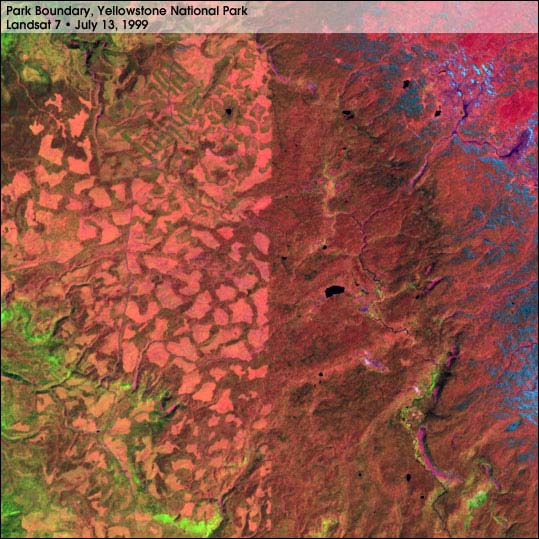 The boundary between Yellowstone National Park and Targhee National Forest is clearly seen in this Landsat 7 image. On the right side of thevertical line running through the center of the image is mature forest located inside the park. In contrast, the forest to the left of the boundary is dominated by numerous clearcuts, shown as light orange/pink amidst the darker,greener forest. The stands of mature trees appear darker than the saplings, shrubs, and grasses growing in clearcuts becausethe tall trees shade the ground beneath them. The image was taken by Landsat 7 on July 13, 1999

Unforeseen impact
When asked what is the biggest impact the Landsat program has had, a choir of scientists says it is the ability to monitor change. Being able to not only get a still image, as in practice was the case in the beginning of Landsat as the processing time of each scene was several weeks, but to see what changes of the surface of the planet that take place is where the real power of Landsat lies. So, the very change monitoring was an unforeseen impact in itself. There are several secondary unforeseen impacts as well. For instance is it possible to see how the rainforest has been decreasing resulting in political actions to reduce the rate of change as well as enabling administration of regulations. Illegal mining is another activity that has had political consequences and so on. It turned out Landsat was a very powerful tool in land and natural resources management.

The success of open data policy
In the early days of the Landsat program it took weeks to process the satellite image, that you then would receive in paper version. Needless to say, that limited the number of satellite images produced and distributed pr year. Even in 1999, when the digital technology was up and running, only around 100 images pr day were produced - and then delivered on a CD or tape, not over the internet. It wasn't until 2008 when they combined modern technology with fast processing and immediate downlinking AND free access that the use of Landsat data massively increased.

What is remarkable about the Landsat program is that all the data is now freely available, not only to US citizens, not only to public sector, but globally to all kinds of users be it the public or private sector. The resulting numbers are an immense driver creating new markets that nobody really expected. We consume satellite images for its esthetic value (ref Earth as Art for instance), for private us and for numerous societal uses that saves lives (disaster management), increase productivity (agriculture) etc.

GEO's Global Earth Observing System of Systems provides a framework for discussing open data policicy. The US is one of the initiators and active members of this community. The Landsat program is considered a Best Practice in terms of open data sharing nationally as well as across boarders.

The US, through its demonstration of how beneficial free access to data is, has influenced the entire world. In the Group of Earth Observation open access to Earth observations is a key element in building an interoperable Global Earth Observing System of Systems. It is of course not possible to build anything interoperable if one does not share! The Landsat program is one of the successful references to why this is a good idea also for other more reluctant countries - and international programs. I'd say it is a direct link between GEO's work on open data policy and the EU's decision to share the coming Sentinel data, and that China is now opening up and sharing some of their satellite data as well. 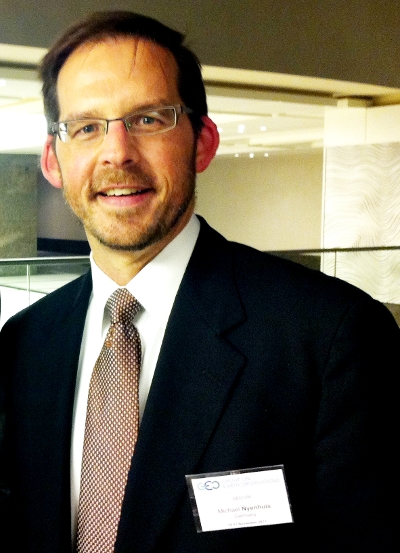 The open data sharing policy is a foundation of the Landsat business model. In 2008 USGS made all, now, 3.7 million satellite images freely available to the public. Besides following a use-taxpayers-money-only-once principle, it was believed that the increased accessibility would inspire more innovative projects both publicly and privately. And the use of Landsat data exploded. From some 25000 downlinks pr year to 3 million downlinks! In some ways it is similar to the freemium business model. It works. Although the largest user group are governmental improving services within homeland security, water management etc, there are some major enterprises to be found as well. Google is one of the most prominent users of Landsat data but we have also seen innovations like the ESRI's ChangeMatters.
NASA's Lawrence Fridl is one of
the GEO community's ambassadors
for showing the socio-economic
benefits from Earth observations.
Credit: B L Bye

The investment in Landsat 8 is estimated to 1 billion USD. Sounds like a lot of money, and it is. But when you consider the ROI (Return On Investment) of the Landsat program today of 1 billion pr YEAR, that sounds like something I would put my money (and taxes) into. It is not often you find investment object where the ROI is met in one year.

How can anybody afford not to share their data for free? Beats me!

Will we see 40 more years of Earth observations? I most certainly hope so and we should all cross our fingers for today's important launch of the next member of the Landsat family. As they say in China and Ireland: May the wind be at your back!

Braze yourself for the Landsat thrill; lift-off is scheduled at 10:02 am PST today Monday 11 February 2013.

Useful links to more details about the Landsat program: