Tommaso Dorigo
Today new results of Higgs searches have first been shown in Kyoto, at the Hadron Collider Physics conference. Let us see the CMS and ATLAS updates of their measurements in the ZZ-> 4 leptons final state, which constitutes the best signal-to-noise channel to study Higgs properties cleanly and measure mass and spin-parity of the new found particle. 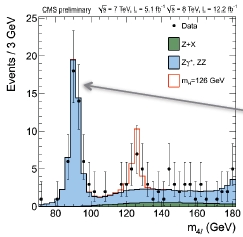 CMS first. CMS updated their ICHEP result by adding statistics from the 2012 run, for a total of 17.3 inverse femtobarns of proton-proton collisions at 7+8 TeV center-of-mass. The four-lepton invariant mass is shown on the right. As you can see, the peak at 125-126 GeV has become more prominent, and is in great agreement with Standard Model predictions (the arrow shows the Z boson peak reconstructed from 4-lepton decays). Note that the data follow very well the background prediction over all the spectrum, with a bumpy departure at the mass of the new particle.

The significance of the peak in the ZZ->4l final state alone is quoted by CMS at 4.5 standard deviations. The signal strength is fit at 0.8 +0.35-0.28 times the Standard Model.

The events allow a beautiful measurement of the boson's mass. A three-dimensional fit is employed, which uses not only the four-body mass, but also the kinematics of the final state as well as the individual per-event mass resolutions (muons and electrons have different momentum resolution depending on how they are measured in the apparatus). This allows CMS to produce the figure below, which shows the likelihood contours in the mass versus signal strength plane. As you can see, the signal strength is bang-on the expectation, and the mass is measured as M_h = 126.2+-0.6+-0.2 GeV. 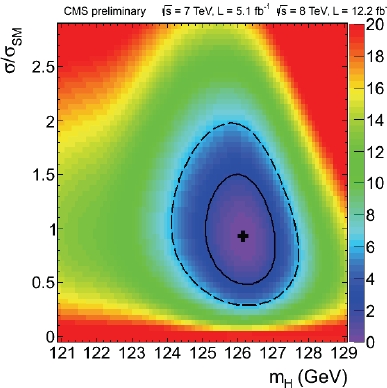 Another nice measurement is the one of spin and parity of the state. The Higgs is expected to be a scalar particle: zero spin, positive parity. Having observed the diphoton decay implies that this new particle, if it is a single state decaying both into diphotons and ZZ pairs, has even spin. So a test is to see whether angular distributions are more compatible with the 0+ or 0- hypothesis. The separation between the two is provided by the angular distribution of the decay products. A discriminant (pseudo-mela, where ME stands for matrix element) is cooked up, and on the left you can see the different expected distributions for the two alternatives. The data distribute more according to the full red line, albeit the separation is not yet very strong. 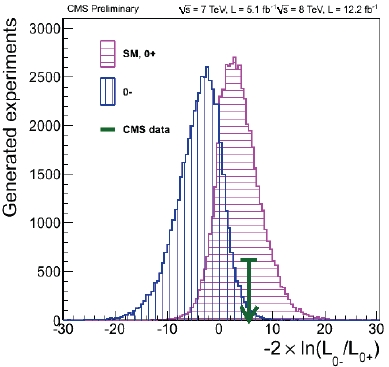 As for ATLAS, they did not add statistics in their H->ZZ->4l search since ICHEP. The money plot is therefore the one shown below, which is still based on 10/fb of luminosity. What they improved on was in background studies and lepton identification performance. They are still quoting a signal strength of 1.4+-0.6 times the SM expectation, and a significance from this channel of 3.6 standard deviations. We will have to wait for Moriond to see their new data. 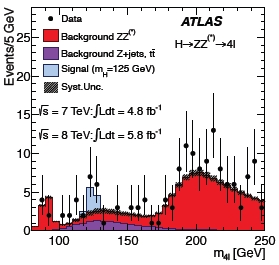 So in conclusion what we can say is that the four-lepton decay mode confirms the standard model interpretation of the new found object. CMS has furthered their studies quite a bit since last July, while ATLAS is lagging behind a bit. One wonders whether they have something cooking... Maybe we can expect surprises ?

I personally doubt it. As this measurement shows, and as others will demonstrate in the next presentations at HCP, the particle behaves in rather disappointingly good agreement with what the vanilla Standard Model expects. Stay tuned for more results!
A Quantum Diaries Survivor
More Articles All Articles
About