Tommaso Dorigo
Maybe more interesting than the just reported result of searches for the Higgs boson into four-lepton final states (ee, eμ, μμ) are the result presented by CMS and ATLAS on the searches for the Higgs decay into tau-lepton pairs. The reason for the interest comes from the fact that last July the rather high rates of Higgs decays to photon pairs had suggested to some that this new particle might have reduced couplings to fermions, and could thus be a non-Standard Model particle after all.

[ Remember, though: if the Higgs boson is observed in direct production, it is very hard to assume it does not couple to fermions: it is in fact the loop of virtual top quarks that emit the particle, unless other much more complicated mechanisms (which would have very, very low rates in any conceivable model) are at work.  ]

So it is with some expectation that the results of LHC searches for tau-lepton pair decay modes must have been met at the Hadron Collider Physics symposium in Kyoto today. CMS appears at present a bit more sensitive to detect tau leptons than ATLAS, and the results shown confirm this. To make a long story short, see the following graph, which details five independent measurements of the Higgs to tau tau decay rates. The measurement can be split in different run ranges or, even more interestingly, in different final states (top part of the graph). That is because the tau pair can be sought in combination with one or two additional hadronic jets, or with a vector boson. These three are independent production modes, and it is interesting to compare the relative signal strengths: a discrepancy might occur in just one of the three, indicating maybe some departure from the Standard Model... 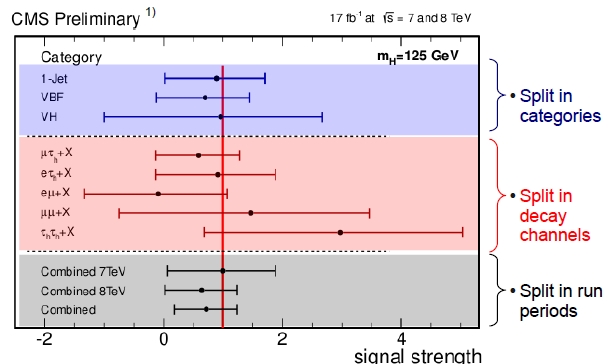 No such luck: the data are in very good agreement! Indeed, by combining the measurements, CMS measures a production times BR rate of 0.72+-0.52, in good agreement with the expectation of 1.0. 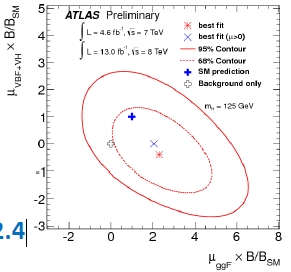 ATLAS had not shown any results on tau decays at ICHEP, and now produced their first measurements based on 17.6 inverse femtobarns of 2011+2012 data. Their combined measurement is best shown in a graph where the signal strength is displayed for the two production modes separately: Higgs bosons produced by gluon-fusion mechanisms, and Higgs bosons produced via mechanisms involving vector bosons (what in the graph above were separated in "VBF" and "VH"). The result is a signal strength larger than expected in the gluon-fusion mode (2.4 times the SM), and negative for the other mode (-0.4). Overall, there is however consistency with the Standard Model within the still large uncertainty: the global fit to the signal rate yields 0.7+-0.7. The SM is shown as a blue cross in the graph, and the best-fit solution is the red marker. As you can see, the SM is within the 1-sigma ellipse.

In conclusion, this is a very hard blow to anybody who speculated on the exotic nature of the new particle announced last July by ATLAS and CMS. If it is a door to new physics, it is still very well closed!
A Quantum Diaries Survivor
More Articles All Articles
About