Tommaso Dorigo
A new result by the CMS collaboration has been produced today on top quark physics. For those of you who only get triggered by the search of new particles or new forces, the study of "yesterday's signals", such as top quarks, is boring and uninformative; but high-energy physics is a rich field of research, and we extend our understanding of subnuclear physics no less by getting to know how exactly top quarks get produced in proton-proton collisions, than we do by placing limits on ephemeral particles (SUSY ones, e.g.).

So I salute the new measurement as an important advance. Using over one inverse femtobarn of data collected in 2011 (about a hundred trillion proton-proton collisions), CMS was able to study top quark pairs in great detail.

The production of a pair of top quarks mainly occurs at the LHC when two gluons, one from each proton, collide head-on and "fuse" into a top-antitop pair. The resulting kinematics of the produced tops gets transferred to the apparent energy and momentum of the produced final-state particles that the top quarks produce as they decay. So by identifying the final-state particles and then reconstructing the event kinematics we can "zoom into" the details of the production process.

Top quarks were hard to spot in the early days of the Tevatron, just after the top quark discovery: I remember that in the 100 inverse picobarns dataset collected by CDF during Run I (1992-1995) you could get personal with the individual events. Having a look at all the event displays of the dileptonic candidates would take you no longer than a lunch break.

Now, however, the LHC is a true top factory: the top production cross section is 25 times larger at the LHC 7 TeV collisions produced in 2011 (this year we will run at 8 TeV so we expect a further 20% increase in top quark rates). In one inverse femtobarns of data no fewer than 160000 top pairs have been generated in the core of CMS. One can then select just the cleanest topologies, and perform very detailed studies.

As top quark pairs are created, they immediately decay, each producing a W boson and a bottom quark. The W also lives a very short life, and decays either into a pair of light quarks, or into a lepton-neutrino pair. Both the b-quarks "color-connected" to the original tops, and light-quarks from the W, then produce sprays of hadronic particles, those things we call "jets". What we observe in the end may be then categorized by the number of jets we see:

- If both W bosons have decayed to jet pairs, we have a total of six jets in the event, and we call it a "all-hadronic" decay of the top quark pair. Since the W to jet decay occurs two thirds of the time, this in total happens 2/3 * 2/3 = 45 % of the time.

- If one W boson produced an electron-neutrino (eν) pair or a muon-neutrino (μν) pair,  while the other produced two jets, we have four jets and a lepton-neutrino in the event, and we call it a "single-lepton" topology. The (eν) and (μν) final state happen one ninth of the time each, so the single-lepton final state in total happens 2*2/9*2/3 = 8/27, or 30% of the times (the initial factor of two accounts for the fact that either of the W bosons may decay to the lepton pair).

You might have noticed that I voluntarily left aside the decays of W bosons yielding τ leptons. Tau leptons have a complex signature, and contribute a little to each of the above classes, since they may produce narrow hadronic jets (when the tau decays into light hadrons), or electrons, or muons as they decay. Let us forget about taus in this case -although the final states containing them are actually fun to study.

So CMS concentrated on the single-lepton and the dilepton topologies for this precise study - despite their being relatively less frequent, these topologies provide a high signal-to-noise ratio, since electrons and muons are identified with great purity by the detector, and there is a dearth of physics processes competing in their production.

Using events passing a selection aimed at reducing further the few backgrounds, CMS reconstructed the top decay kinematics from the observed objects, and then proceeded to study several kinematic distributions of the top pairs, extracting what is called the "differential cross section" of top quark production as a function of these kinematic quantities. One example is shown below. 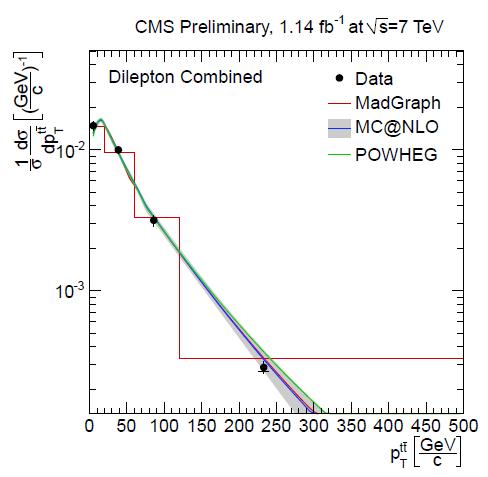 Here you can see the cross section computed as a function of the combined transverse momentum of the top quark pair. It is the amount of "hadronic recoil" that the top pair underwent at the moment of production, a quantity which tells us a lot about the production mechanism, and the amount of "initial state radiation" present in the process. You can see that the data (black points with error bars) is observed to be in good agreement with the prediction of theoretical models (red curve and grey band).

A whole set of such distributions are available in the CMS publication. There is a tremendous amount of new information on top production present in the  study. And the theoretical curves appear to be able to describe top production to great detail across the whole phase space of the process. This is very important also for many searches for new physics that we are performing in CMS: top quark pairs are a nasty background to many new physics processes, and the fact we can prove that theoretical models predict the differential cross section accurately allow us to trust our Monte Carlo simulations of top quark pairs much more confidently.
A Quantum Diaries Survivor
More Articles All Articles
About