Tommaso Dorigo
As we near the first week of July, with the start of the International Conference of High-Energy Physics in Melbourne (July 2nd-8th) and the July 4th press release at CERN on the new results of Higgs boson searches by ATLAS and CMS, the attention to new particle searches is understandably increasing. And the question is what the new 8-TeV data produced by the LHC this year will give.

Will the final word on the existence (or absence) of the Higgs boson be said ? Will there be new particle discoveries ? Will the LHC surpass the Tevatron precision on the measurement of the top quark mass ? Is the Standard Model going to show cracks from the result of other, off-the-spotlight  measurements ?

Let me first of all tell you that I personally have even more at stake than you would think. Back in 2006 I bet $1000 [$750 with Jacques Distler and $250 with Gordon Watts] that no new particles or new physics would be unearthed by the LHC experiments from their analysis of 10 inverse femtobarns of data. Who will pay whom in July ? I would be glad to unfork $1000 if we did find some new physics signatures -that was the evident purpose of my "insurance bet". But I fear I will rather have to cash the sum.

While we wait, let us leave these trivial monetary issues aside. I have the feeling, in fact, that while we await for the 2012 results, many of us have not even bothered to give a detailed look at the 2011 results - which may soon be outdated, but were quite interesting in their own right ! Since I have presented these results (those produced by CMS, that is) at a conference no longer than two weeks ago, I think I can entertain you today with some quick summary of interesting things we produced in the last few months. I will give three examples all having in some way to do with Z bosons, just to pick a common theme.

Top quarks are produced in large numbers at the LHC: with a cross section of about 170 picobarns, the LHC at the highest luminosity of 6 nb^-1 per second produces them at a rate of up to N = 0.006 pb^-1 s^-1 x 170 pb = about one pair per second in the core of both ATLAS and CMS. That's four tops per second, not counting the small surplus from top quarks produced singly (by the electroweak interaction) !

So, the LHC is a top quark factory. That means that we can study in great detail the characteristics of this amazing heavy quark. And one of the questions we want to answer is whether decays of the top quark involving a Z boson are really as impossibly rare as the Standard Model predicts (less than one in a trillion). New physics could in fact make the decay t -> Z c (whereby the top turns into a charm quark by emitting a neutral weak boson) much more frequent, with a possible striking signal: the Z boson in fact may decay to a pair of muons or electrons, and when it does the signature is unmistakable.

CMS searched for such a signature in its 2011 dataset, finding results in perfect agreement with the absence of a detectable signal. The figure below shows the reconstructed top mass distributions of events featuring three charged leptons (electrons or muons, that is -taus were not considered here), missing transverse energy, and jets. Here one top quark is supposed to have decayed "regularly", to a Wb final state; the W boson then decays to a lepton and neutrino, and the neutrino produces the observed missing energy; the b-quark produces a hadronic jet. The other top is hypothesized to have decayed into a Zc final state, so the event must contain two additional leptons making the Z mass and one additional jet. 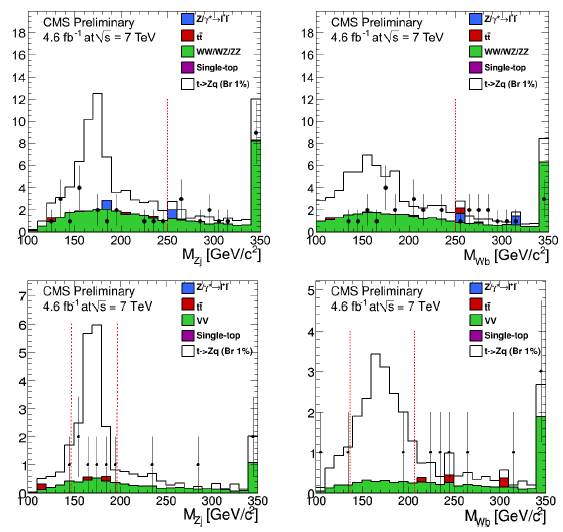 On the left column the graphs show the mass of the "Zc" system; on the right column is the reconstructed mass of the system of W boson and b-quark candidates. The top row contains events selected by a kinematic criterion enriching the data of events similar to top pair production; the bottom row contains events passing an alternative selection based on the presence of a b-quark tag in one of the two jets. In all four cases, the flavor-changing neutral current signal expected if the top has a 1% branching fraction in Zc final state is shown with a white histogram. The data (black points) follow closely the predictions of the Standard Model background, which is dominated by WW and WZ production.

Using the agreement of data and expectations, CMS placed a limit on the t->Zc branching fraction at B<0.34%: the top quark decays to Z bosons less than thirty-four times every ten thousand times.

Z' bosons are particles predicted in a variety of extensions of the Standard Model. They behave similarly to the well-known Z boson, but are heavier (of course, else we'd have observed them already in lower-energy experiments) and may have modified couplings to fermions, such that their decay to particular pairs (such as top-antitop) could be enhanced. An example of such models is topcolor-assisted technicolor models, if you really care to know. 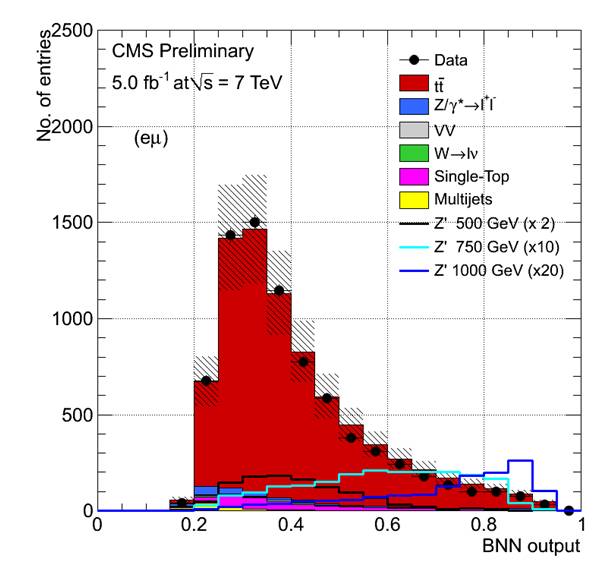 looked for the Z' boson in events featuring top-antitop quark pairs in the clean dilepton final state, by reconstructing the total invariant mass of the two top quarks. Some care is required if you want to know the full event kinematics in dilepton top pair decays: here you have a neutrino from each top, and so the missing transverse energy is utterly insufficient to completely decrypt the event. CMS assumes that neutrinos have zero longitudinal momentum, obtaining an approximated but effective estimator of the mass of the decaying object (the Z').

A neural network is then trained to distinguish the signal from regular top pair production using the event kinematics, and the results of its application to the data is shown above (right): the data follow Standard Model backgrounds (mostly due to top quark pair production, in red), and an upper limit can be obtained on the rate of Z' production; the latter is then converted in a lower limit on the Z' boson mass by using the relationship between production rate and mass known by the new physics theoretical model. We thus learn that Z' bosons decaying to top quarks are heavier than 1100 GeV, if they exist. But fear not - we'll continue to look for them ! 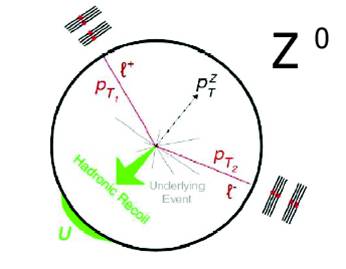 If you produce a Z boson in a proton-proton collision, you do not expect it to be at rest: the unknown imbalance in the longitudinal momentum of the two colliding quarks will get the Z to move one way or the other with significant boost. However, if you look at the production in the plane transverse to the beams, you will see the Z most of the time moving with little momentum: this "transverse boost" is small and is due to the quarks producing the Z boson radiating "soft gluons" before colliding, acquiring a transverse momentum with respect to the beam. This is then imparted to the Z, which when created appears to "recoil" in the transverse plane against soft jets of hadrons - the green stuff in the sketch on the right.

The transverse momentum distribution of Z bosons is very well understood and it is the subject of precision measurements at hadron colliders: it in fact allows us to "tune" the parameters of Monte Carlo simulations of the QCD gluon radiation process. The shape of the Z pT is also crucially important to model well the pT distribution of W bosons, which is in turn needed when we try to reconstruct the W boson mass from the momenta of a charged lepton and its neutrino: the detailed understanding of the W pT distribution is a necessary ingredient, and W and Z bosons acquire transverse momentum thanks to the same soft-gluon emission mechanisms: hence the use of the Z decay, whose kinematics can be reconstructed more cleanly from the two charged leptons it emits.

The pT distribution of Z bosons is therefore peaked at low values - typically 10 GeV or so. But the "tail" of the distribution is long: it is rare but not impossible to find Z bosons with transverse momenta in excess of 100 or more GeV. New physics could however make these high-pT Z events much more likely: a whole class of theoretical models predict enhancements in the tail of the transverse momentum distribution.

CMS studied the very high-pT Z boson candidates decaying into muon pairs in the 2011 dataset, comparing the pT distribution predicted by the Standard Model with the one foreseen by these new physics models. You can see below the distribution of 1/pT (the inverse of the transverse momentum) for the data and the background prediction: in 1/pT of course the highest momentum events are the ones on the left. The new physics models considered would produce enhancements similar to those shown by the coloured histograms (which refer to "contact interaction" models with mass scales of 1 and 1.5 TeV, respectively, or to new gauge interactions with the same scales). However, no enhancement is seen, which allows CMS to place lower limits on the effective mass of the processes producing the deviations. 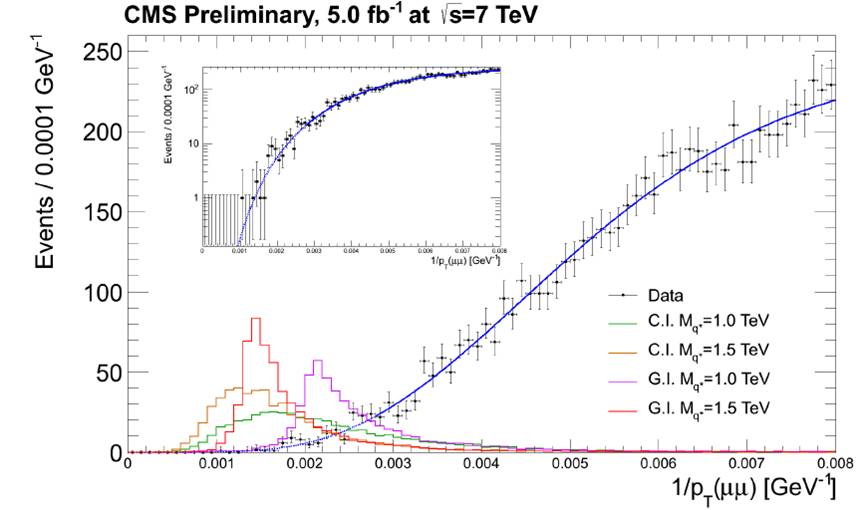 In the figure, the inset shows a semi-logarithmic distribution of the data, which allows to compare visually in more detail the highest pT events to the model.  For more details, please see the physics analysis summary of this analysis.