Tommaso Dorigo
A search just posted on the Cornell arXiv by the ATLAS Collaboration caught my eye today, as it involves a signature which I have been interested on for quite a while. This is the final state of proton-proton collisions that includes an energetic photon and a recoiling dijet system, when the dijet system may be the result of the decay of a W or Z boson - or of a heavier partner of the Z, called Z'.

We are talking about research being carried out at the CERN LHC, the Large Hadron Collider. The machine has been producing data since 2015 in what is called "Run 2", and the ATLAS and CMS experiments are mining those data to search for new phenomena in the very highest-energy collisions ever produced by humankind.

The ATLAS analysis in question focuses on data collected in 2015 and 2016. This is not the full bounty available so far, but these searches take a long time to be performed - an estimated 10 person-years for any single one of them. And the experiments are producing similar results at nearly 100 per year, so you well understand the titanic effort, as well as why it took over one year to get the 2016 data used for inference in this particular study.

Z' bosons arise from the simple extension to the Standard Model (SM) resulting from a minimal enlargement of its gauge group. This is attractive as it can be the observable evidence of a larger group structure, hinting at possible grand-unification schemes -the wildest dream of particle theorists. In addition, Z' bosons are attractive game at the LHC, as they may decay into clean lepton pairs.

While lepton pairs are clean (they are mimicked by very little backgrounds from standard non-new-physics processes), they are a less frequent decay of a well-behaving Z' than jet pairs. The latter are due to the hadronization of pairs of quarks, of course. So if one is searching for Z' bosons, one relies on lepton pairs when the expected production rate of the Z' is high, but when the rate is low (as it happens when the Z' is produced with large transverse momentum) one has better look into the dijet final state, as one may discover a signal there long before one collects enough of the rare dilepton decays.

The recently boomed jet substructure techniques, which can recognize the decay signal of heavy particles within the core of wide, high-energy jets, come handy in this research program, as it has been demonstrated that in very high-energy jets the isolation of subjets allows to extract resonant signals better than what is possible when the signal are not boosted. In other words, if a W or Z boson is produced and decays at rest, the resulting signal is buried amidst a huge background and it is impossible to detect. But if the W or Z is produced with very high transverse momentum, its decay signal found with jet substructure can be extracted. One thus pays a large price in rate -high transverse momentum production is rare- but still wins as the resulting signal to noise ratio is much higher.

And what is interesting about the whole thing ?

Twenty years ago I was looking for the signal of Z decay into b-quark pairs in CDF data at the Tevatron collider. This was my PhD thesis, whose aim was to understand how to go for that known signal in order to then move to the decay of the Higgs to the same final state.

Well, I did see a Z->bb signal, against all odds and preconceptions of colleagues - it is shown in the graph on the right (the inset on the top right shows the mass distribution of jet pairs in the data as red points with uncertainty bars, compared to the background expectation in cyan; the bigger graph shows the background-subtracted distribution, compared to a Gaussian shape fit to simulated Z events). At this link you find a broader recollection of the whole thing.

It was then that I understood one thing that would make the same search more promising in the future. In hadron collisions, the Z->bb signal has to fight against a huge background from quantum-chromodynamical (QCD) processes that produce real b-quark pairs. These are for the largest part initiated by gluons: a gluon in the proton hits a gluon in the antiproton, and they generate another gluon; the latter then "splits" into a bottom quark pair. Even only looking at pairs with 91 GeV of mass (the mass of the Z), there's at least 20 times more of those than real Z->bb decays.

Now, if one could find a way to select out gluons in the initial state, then the QCD background would be strongly reduced. And this can indeed be done if one asks the events to contain, in addition to the b-quark pair, an energetic photon. For the photon, if emitted from the initial state of the collision, can only be originated from a quark, as gluons are not electrically charged!

So you understand why I am interested in this final state of dijets with a photon. Now, you could well ask why I did not go out myself in search of the Z-gamma signature in CMS data myself. That would be an excellent question, one to which I have no good answer. I ended up doing different things, that's all. But I hope some colleague eventually pulls it off! In the meantime, let us look at the ATLAS analysis, which does not do that - they search for jet pairs, but do not require them to be b-tagged - Alas, ATLAS...

The search for Z' bosons is performed by ATLAS by finding fat jets of large transverse momentum that contain two sub-jets, and scan the invariant mass of this pair for a bump-like excess. On the other side of the event they have an energetic photon, or an energetic jet. In the article they show how their substructure technique can indeed identify an excess at 80-90 GeV due to W and Z bosons, and that's very good by itself - but why not producing the same plot when the jets are b-tagged?

That would have answered my question, damn it. But I know the answer - the Z' can decay to any kind of quark -antiquark pair in principle, and with unknown relative branching fraction (you need not assume that the Z' couplings to quarks are the same as those of the Z), and sorting out b-quark jets, while possibly increasing the signal to noise ratio, would thus restrict the usefulness of the result. 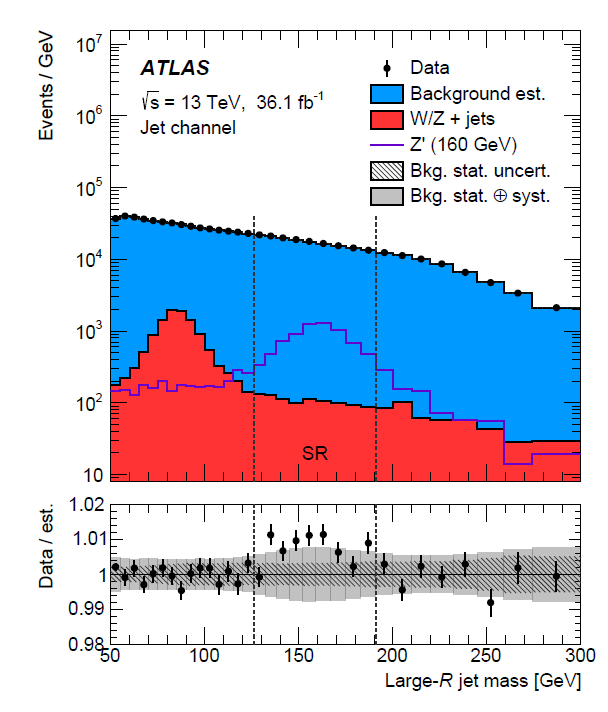 Anyway, their search focuses on dijet resonances of higher mass than W and Z. On the left you can see one of the signal regions (the search is done independently for different Z' masses) of the Z' plus photon final state, the one where the Z' has a mass of 160 GeV.

The statistical significance of the excess above is quoted by ATLAS at 2.5 standard deviations before accounting for the trials factor (the fact that they have been looking at many different mass hypotheses independently).

I was at first a bit surprised by that assessment, as by eye I would have guesstimated a 3-sigma effect. But if you look carefully, the systematic uncertainty in the background estimate (the outer of the two shades of grey) has also a bumpy structure at about the same mass - I believe it arises from the way ATLAS computes the transfer function that estimates the background, using a variable called "tau_21" connected to the fat-jet substructure.

Now, the paper does not explain how much of that systematic uncertainty is correlated across bins. Our eye typically neglects the possibility and the effect of correlated uncertainties; a fully correlated systematic on that bumpy grey band could eat out any excess of the same shape in the data with a very small price in any test statistics one used in the fit. So as much as it would be great to see a 150 GeV Z' in ATLAS data, I think we have to agree it is just another fluke. Alas, ATLAS...