Tommaso Dorigo
While New Yorkers (and others on the east US coast) prepare to deal with hurricane Sandy and the possible water surge resulting from the very strong winds and low pressure of the system, a similar situation is expected in Venice on Wednesday; unlike New Yorkers, Venetians are rather accustomed to the phenomenon - familiarly called "acqua alta" (high water) by residents. However, when the level of water is exceptionally high, normal protection systems to shops, offices, and ground floors of homes prove insufficient.

That is probably going to be the case in the evening of October 31st, when the tide is expected to reach to the level of +1.40 meters above average sea level, due to a combination of factors -low pressure, full moon, winds.

A tide of +1.40 is not unheard of - the maximum ever reached in the last few hundred years is the +1.94 meters of November 4th, 1966. I believe there have been at least a dozen stronger events in the last forty years or so. Still, Venetians find such conditions very worrying, when the city appears under siege from the sea, and it is paralyzed until waters flow out. A water level of +1.40 above sea level means that 90% of the town is flooded, with typically 8 to 12 inches of water on the ground, and up to 24 inches in some low points (among them, the whole of San Marco square).

I know well that high tides in Venice are also an attraction of sorts to tourists, who in those circumstances can usually be seen walking bare-footed in the streets with amusing looks and taking pictures. Nowadays one can even observe the phenomenon from web-cams (here is a list of webcams that can be used); however the maximum of the tide is in this case expected shortly before midnight, so I am not sure how much will be seen with those resources.

Below is the graph with the forecast of the "centro previsioni e segnalazioni maree" (the venetian center for forecasts and warnings of tides"). The blue line shows the prediction, the red one shows the normal conditions from Moon and Sun influence. 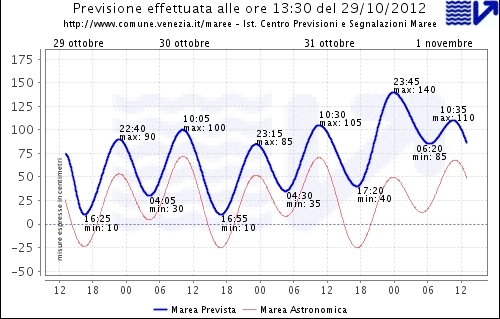