Hontas Farmer
SETI Live's data on Kepler-186's solar system could be revealing evidence of extraterrestrial life. SETI may have seen ET's satellite signals already. Here is the data and my analysis.   From my own expertise and experience in astronomy, specifically classifying signals for SETI Live... I say there is a better than 50/50 chance we have found that we are not alone.

SETI Live, a program whereby anyone can take part in searching for extraterrestrial intelligence has already pointed it's telescope array at Kepler-186, also known as KIC 8120608.   I have done some digging and found their results. The following image shows the actual data from SETI Live on Kepler-186.  This image is what SEIT Live calls a "waterfall".

What are Waterfall Plots?
A very useful way of sorting out a mixture of signals that come from different sources (ET or RFI) and get into the ATA beam is the "Waterfall" display. Sources can emit many frequencies at once but those frequencies will generally change in the same way with time if from the same source. If they evolve differently with time, they are probably from different sources. The Waterfall display shows a series of snapshots of the frequencies in the beam, taken every 1 second or so and then stacked on top of each other vertically to make an image. The horizontal position represents the frequency, the vertical position, the time of the snapshot and the strength of each frequency is indicated by the brightness. With this, we can see how all the frequencies evolve with time and decide which are related and which are not.

So how can we know weather we are looking at RFI from our own satellites or an ET signal?

A signal from Kepler-186f would be very faint.  It would look almost like static.  The difference is there would be a pattern of white streaks.  A few dozen pixels long and slightly on the diagonal.  They would be next to each other indicating a communication band.  IF there is a civilization with a satellite system at least as complicated as our own, there would be many such banded patterns next to each other.

I have been looking at SETI Live data on and off for many years now.  I think I know RFI when I see it.  I know random static when I see it.   Looking at the data from Kepler-186f this is what I see.


Usually I am the one who gives a sober voice and a calm measured reading to scientific data while the rest of the media has a field day.  That is my niche. There are many caveats to what I am about to claim. This could be confirmation bias. Who wouldn't want to find such a signal set in a known solar system? It could be really weak RFI from Seth Shostak talking to his wife about picking up milk on his Bluetooth. It could be reflected interference from satellites in Earth's orbit.  I could have lost my ever loving mind.


Allow me to be bombastic, based on the above data and I will say there is a better than 50/50 chance Kepler-186f has technological life.
There is a strong possibility that KEPLER-186f may have intelligent life! Much more study would be needed along many fronts before we could know this one way or the other with real certainty.  I would put the odds at 50/50 or 60/40 in favor of intelligent life using radio.


I wish to go on record publicly now as saying that there is a very good chance Kepler-186 has a technological civilization which 500 years ago (when the signals would have left there) was at least as advanced as our own.   I could  be very wrong....but that data is just what I would expect an ET signal to look like.  It would be very noisy and degraded broadband communication as one would see from a network of satellites orbiting a planet.


Michio Kaku explains the problems with searching for ET quite well.

None of this is withstanding what I said earlier about how Kepler-186f is most likely much colder than Earth.  There is no reason that technological life could not develop on a very cold planet.  To life which is evolved for such a planet our world is what would seem strange.

How to test this hypothesis.

This situation shows the reason we need to restart work on the terrestrial Planet finder (both versions coroagraph and interferometer).  If we had the TPF right now we could find out just what the deal was with Kepler-186f.

Only a device like the TPF could practically test the hypothesis that Kepler-186f has technological life in a very rigorous way.   Listening in on radio has many question marks.  Seeing the spectrum of the planet and finding methane, water vapor, carbon dioxide, and soot, from technological life would close the case to a 70-80 percent chance.

One more thing to consider.  If there are ET's living on Kepler-186f they look at Earth and see us at about 500 years ago.  They see Earth at about the same time that Pocahontas was alive. So unless they have something like the terrestrial planet finder they have no idea we are here, and intelligent.

Updated 4/24/2014 3:05 AM CDST to add a illustration which hi lites my points about what it would take to say we've found ET technological life with anything like 90 or 100 percent certainty.


To look for a signal so strong that it would've been beamed at us intentionally is not a good way to proceed.  Instead we should look for three kinds of evidence, which by themselves would not be proof enough, but when taken together are a powerful argument that a planet must have technological life.  Like a stool needs all three legs for support and stability, this conclusion needs at least the three types of evidence in the triangle.   A Earth mass planet in the habitable zone, possible communication as indicated by non-random appearing radio, IR, or optical signals, and spectroscopic data indicating a life friendly atmosphere with trace elements technology would introduce.

Any one of those three types of proof could be explained away by a naturalistic explanation.  Spectral analysis of 186f, or any other planets atmosphere showing carbon, soot, water vapor, oxygen, nitrogen, and trace radioactive elements could mean two things.  Either a civilization like ours has been belching out carbon oxides and testing nuclear weapons in the atmosphere...or there is very active volcanism.   If we have that spectra data, and a HZ planet, and possible communications, the odds we would see all of those by chance are astronomical...less than 1%.  Then and only then could we say we have likely found the home of another technologically intelligent species.

The following is what survives five Weiner filterings. 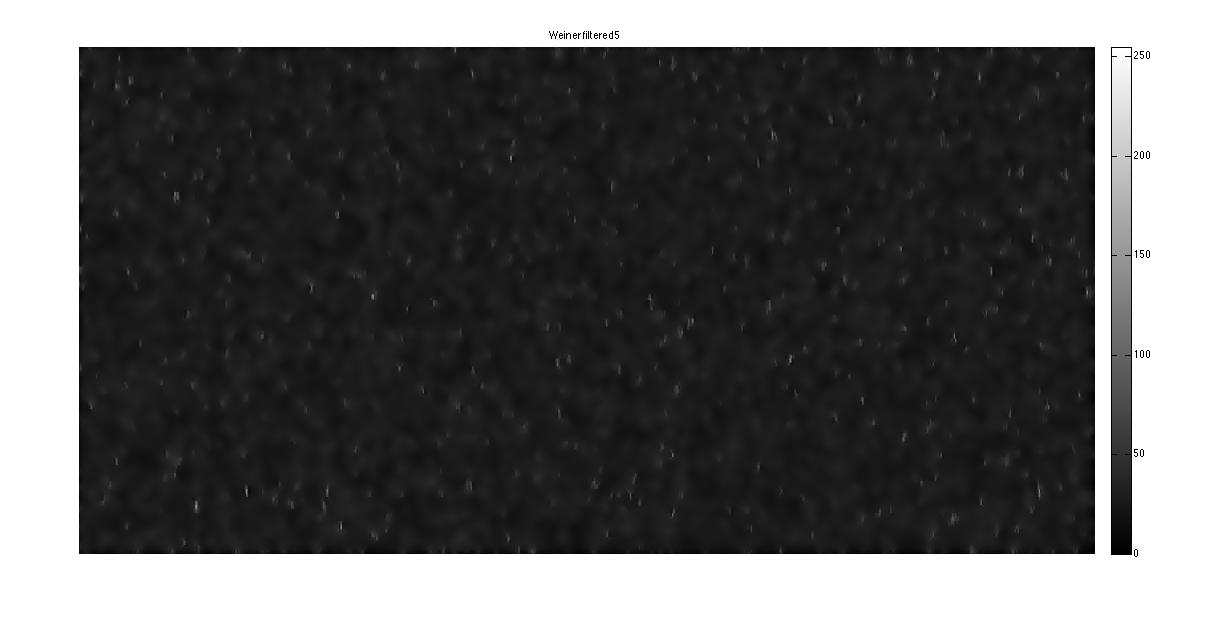 That anything at all survives the filters is interesting.  What I noticed by eye, and which is much more visible in this filtered image are a series of sequential lines, equally spaced on the waterfall both horizontally and vertically.  This is interesting but...I would want to have the raw data before I could do much more than this.
UPDATE January 7th 2015

News of the discovery of even more Earth-like exoplanets by Kepler reminded me of this issue.  One thing we do in science is take more than one observation for verification.  A little while before the Allen Telescope Array stopped providing live data to SETI live they did look at Kepler 186f again at a frequency of approximately 6 gigahertz.  The observation was recorded at SETI live as such.

That looks much more like just noise doesn't it.    However, in response to the review of the crowd that this original blog posting brought, even a bit of a response from SETI, I decided to develop a noise filtering algorithm  using Matlab.  The Weiner filter has the advantage of being able to work given little to no information on what the original signal should look like.

If this is just noise, then that algorithm will simply cancel it out to almost zero.

Running that data through the noise filter, which uses 5 Weiner filters, the output is this.  Before scrolling past the image do you see anything?

Notice on the very far FAR left of this filtered waterfall image there is a evenly space series of white dashes, like a timing signal of some sort.  To the right of that area there are burst of possible transmission aligned to that timing signal.    To the untrained eye that may still look like noise but consider the following sound which is made by fax machines and used to be common before connecting to the internet.


Be honest... if an untrained ear heard the middle of or almost any part of that sound would they conclude it was communication or just static on their phone?  Now imagine how strange ET communications could look.
As far as one astronomer/astrophysicist, myself, is concerned the question isn't will we find ET life but will we know it when we see it?

I have an equation for deciding the probability of ET life being on an exoplanet.

is the probability that a planet P is and Earth like Exoplanet.

is the probability that a planet P has a spectrum indicating life and intelligence.

is the probability that a planet P has a radio signature indicative of Extra terrestrial technology.


All three of these pieces of information are needed to be anything like certain that a given planet P is the home of a civilization.  Any one by itself could be argued away.  For example, spectra analysis indicating an earth like atmosphere polluted with a bit of sulfur, excess carbon, heavy metals etc could indicate an industrial society or very active volcanoes.   There is no way to be sure based on a spectrum alone.  There is no way to be sure based on the detection of an Earth mass habitable zone planet alone.  Further there is also no way to be sure based on a radio signal alone, unless it is so strong that we can watch their version of keeping up with the Kardashians, or something like that. (That is the most likely thing we would see from them.  Thinking we would receive some great cosmic knowledge from ET is not realistic.  Like humans 70 to 98% of them would be of essentially average intelligence with average interest, paying the bills, eating, mating, celeb gossip, which baby products are best.  That's what makes the world go around.)