There is a very little reason to think that a Dyson sphere or Dyson swarm may have been sighted in orbit of star KIC 8462852 .  Whatever it is be it natural or of intelligent design it is big enough to dim the star’s light by 22%, and is not orbiting periodically.  In the case of a Dyson Sphere or Dyson swarm this would indicate mega structures independently orbiting the star and eclipsing it along our line of sight.  They are on record as stating that their Allen Telescope Array ought not be able to detect an intelligent signal at that distance.

I embed this clip from Star Trek: The Next Generation because it is the best video explaining just what a solid Dyson Sphere would look like.

That said, a solid sphere is not what we would be seeing around KIC 8462852.  Instead it would be something like this.   A Dyson Swarm.   Such a swarm need not start by design but could build up over time as more and more space habitats and solar power collectors are put in orbit of the sun. 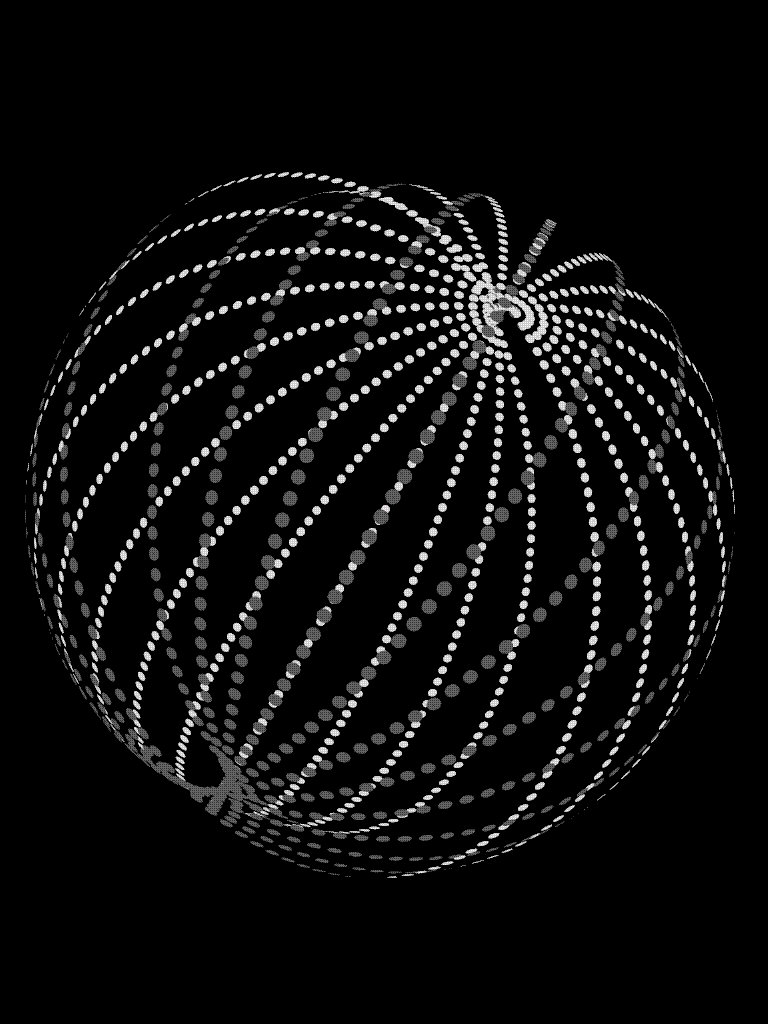 So why is SETI looking at this with the Allen Telescope Array?

According to SETI, in response to this blog post by yours truly, their Gerry Harp strongly implied that the Allen Telescope Array would not be able to detect anything less than a “tuning fork like signal” broadcast from an Arecibo sized dish from a star 500 light years away like Kepler 186F.  Etc.  I stand by my finding regarding Kepler 186F you can see the data that was available to me and the Matlab code I used to analyze it.   That is a standard Matlab code used to remove random white noise, aka thermal spectrum noise, from an image file.  I ran it through that filter a number of times cancelling out the noise and revealing a pattern of radio pulses separated in time and in frequency space.  One weakness of this method was that it had to average over both those domains…but even so that would tend to cancel out things not increase them.   That SETI is using the ATA to look at KIC 8462852 which is three times as distant I will take as a validation.  Thanks SETI, there is no better admission that I had a point than acting.   However they had a point too.  The signals they are looking for will be very very faint.

What radio signals could be expected from KIC 8462852 assuming a best reasonable case scenario?  To be brief, not much.  What we should look for is even a hint of non-thermal spectrum radio noise.  A thermal noise profile would be randomly distributed.  If it is detectably nonrandom then maybe there MIGHT be/have been intelligent life behind the anomalous light curves from that star.   In other words, what we will see from KIC 8462852 would look a lot like whatever was seen from Kepler 186F but much weaker.   Assume that what I claim to have found regarding Kepler 186F was an authentic intelligent signal of some kind and call its intensity I0.  The intensity at a distance d will obey the inverse square law.

There is reason to be optimistic.  A simple assumption is that the amount of radio noise produced by a civilization would increase with the amount of energy it has available.  With at least 22% of the output of a star at their disposal whoever could be living around KIC 8462852 could be putting out exponentially more radio noise than a civilization on our level.  The hardest part may be knowing just what we are seeing if we see it.

We won’t be hearing from their ruler that he wants more episodes of “Single Female Lawyer” or be greeted by someone saying “Lucy I’m home” as a form of greeting.  All we may find is a bit of noise almost indistinguishable from static. That is all they might eventually see from us as well.

We already see something interestingly unusual in the infrared.

As of right now the one non-thermal signature we see is that whatever is causing the dips in light near KIC 8462852 do not appear to be radiating in the infrared.    Everything natural like rock, ice, gas will re radiate most of the visible light energy that impinges on it as infrared.  Whatever this is isn’t doing that.

So whatever it is has to be something that either by nature or design absorbs energy but does not radiate it away as heat in large quantities.  That is the most suggestive observation of possible intelligent origin for this phenomena.  For example, if we ever constructed a structure that could absorb about 20% of the light from our star we would want it to be as efficient as possible at generating photo electric power. Waste heat is waste.  Intelligence abhors waste.   Nature on the other hand tends towards waste heat.  So if this is a natural phenomenon it is a very interesting one.

To get an idea of how big whatever this is has to be consider that Jupiter would block 1% of the light from our sun at the distance of 1500 light years.  To block 22% of the light it stands to reason it has to be that much bigger than Jupiter not just in mass but in cross section.

Personally… I favor that we are seeing debris from some kind of gigantic planetary impact maybe even caused by the passage of a nearby star.   Looking at some old data, using an astronomical tool called Aladin to pull up images taken at mount Palomar I notice in blink comparison there are at least three object that move by as much as 17.25 arc seconds over that period of time.  They could be foreground objects.  Then looking at the star itself in blink comparison between plates taken in 1989, 1990, and 1995 the a “hump” appears on the stars’ lower hemisphere.  That would suggest something very large indeed orbiting close by. 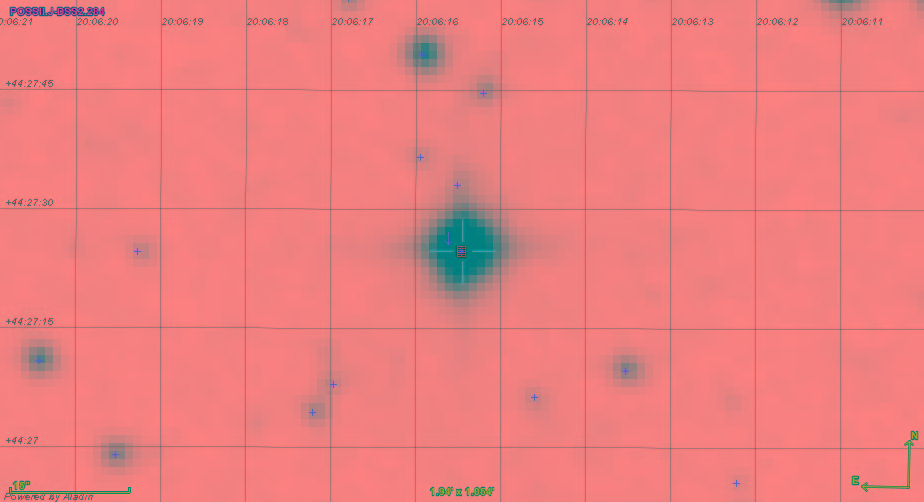 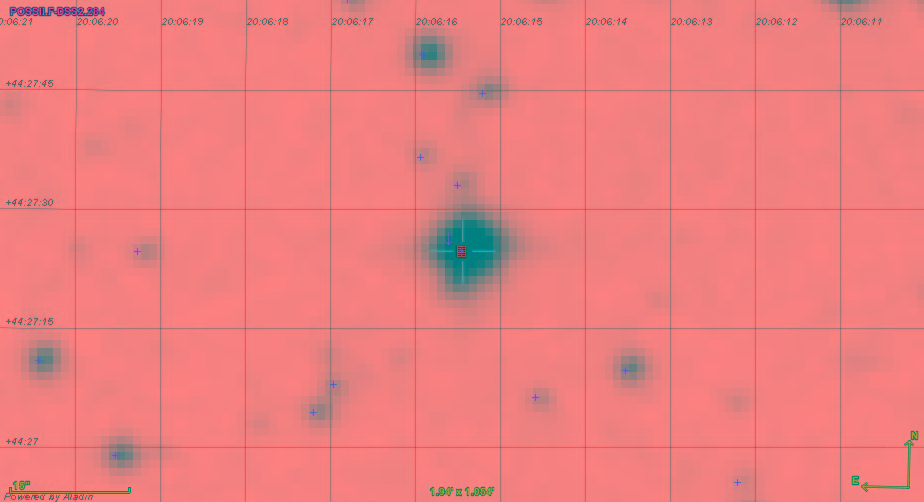 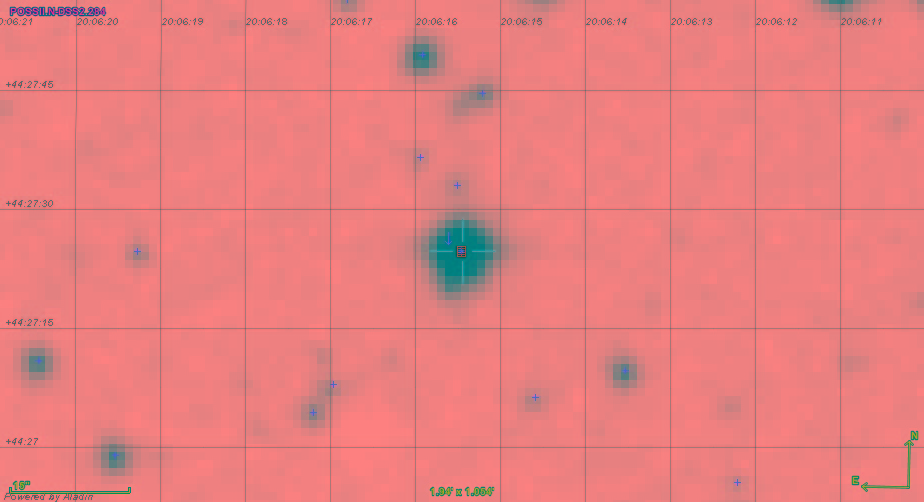 That may not have anything to do with anything…but it is interesting in light of the more recent observations.  It is interesting that in photographic plate images taken so far apart in time the same anomaly would appear in the same exact place.   We will not really know what is going on with a star like this for certain until we have a much better telescope.

Whatever is going on I wouldn’t bet the farm on there being aliens behind this phenomenon.  Nature is full of surprises.  So far the only surprise about intelligent life is how little of it there seems to be.