Hontas Farmer
SETI has listened to KIC 8462852 for two kinds of signals and found nothing stronger than an intensity of 100 Jy (Jansky). They looked for purposefully broadcast narrow band signals and a wide band omnidirectional signal not purposefully sent.  Their first observational pass lasting two weeks found , in their words, "To summarize these observations, we estimate an upper limit for anomalous flux from KIC 8462852 to be 100 Jy in a 100 kHz band over the frequencies displayed." 1  Put another way either no one is transmitting, or no one there is transmitting anything strong enough for us to detect at the distance KIC8462852 is from us (about 1500 light years).

SETI press release “This is the first time we’ve used the Allen Telescope Array to look for relatively wide-band signals, a type of emission that is generally not considered in SETI searches,” said SETI Institute scientist Gerry Harp 2.   That is a kind of signal that I suggested they ought to be open to finding in their data since many more technologies would produce such a signal.  Communications of course would, we use broadband signals for communications.  However, they did not look for a communication signal but something much more powerful, a signal that could indicate propulsion by beamed energy.

The hypothesis was that we are looking at a star where a species has constructed a Dyson swarm.  So they would have access to practically limitless electricity as free as we have access to water.  So for them to run something like an ion engine powered by a strong beam of free limitless solar power broadcast into that solar system for the use of their spacecraft makes sense.  That would be a signal we could have a prayer of detecting.   A broadband communication signal does not need to be nearly as powerful.

In my own work reported here at Science 20 on a star about three times closer I found possible broadband communication signals in data released publically by SETI at the limit of what could be detected  by the Allen Telescope Array with a very specific noise filtering algorithm.   I also noted in a previous posting that KIC8462852 being about three times as distant would have a signal one ninth of the strength.  So, I would not expect my own noise filtering code to find anything in a waterfall plot of SETI's data....I would still like to try it and see.

So what are the odds that what we see from KIC 8462852 is due to extraterrestrial intelligence?

Using the criteria I formulated for stating that Kepler 186 f had a 50/50 chance on this star the graphic would look like this. 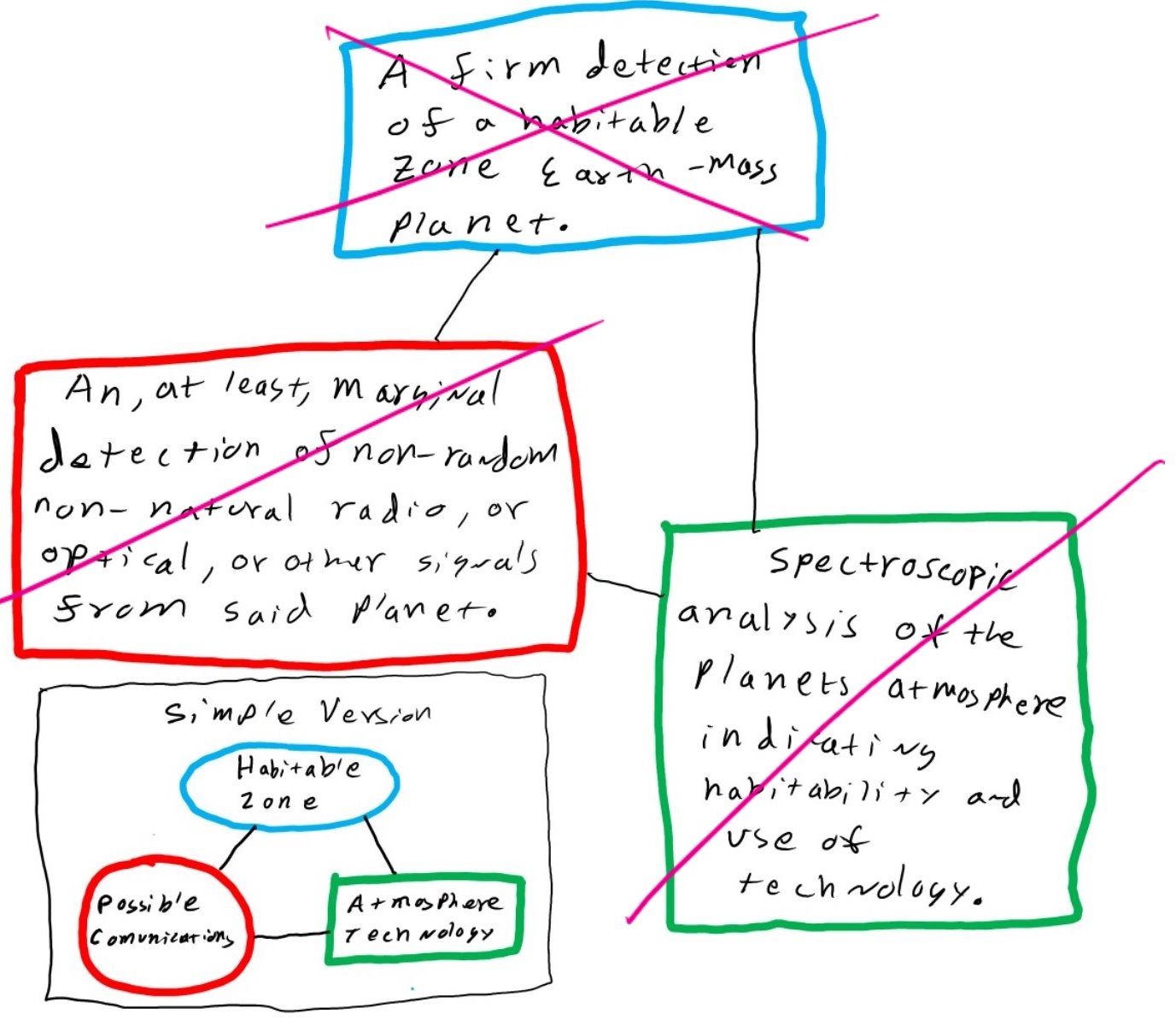 We don't have evidence of an Earth Mass habitable zone planet.  In a solar system with a Dyson Swarm there would probably still be a home planet.  Granted the methods we use now would not find a home planet among the noise created by a hypothetical mega structure.  Right now we don't have a detection of a possible home for life to originate on around KIC 8462852.

Based on those criteria the upper bound on the probability for this being extra terrestrial life is about 1%.  Not "vanishingly small" as many other news writers will describe it.  If I was betting the mortgage payment in Vegas I would bet against it.

TL;DR  After a radio search for signals from KIC 8462852 with the Allen Telescope Array it has been found that this star is not likely to be the home of extra terrestrial intelligence.  That said, the possibility can't be completely ruled out.  Who know what technology an ET might use. Further studies with future telescopes will need to be carried out to get a look at whatever is causing the light curves of KIC8462852.
__________
References
1   Radio SETI Observations of the Anomalous Star KIC 8462852 G. R. Harp, Jon Richards, Seth Shostak, J. C. Tarter, Douglas A. Vakoch, Chris Munson  arXiv:1511.01606 [astro-ph.EP]