NASA has announced that there is flowing liquid water on Mars.  Where there is water there is life.  That is an old adage among astrobiologist.  We “follow the water”.  Water had lead us to be hopeful that on icy bodies such as the icy moons of Jupiter, Saturn, and maybe even the (dwarf) planet Pluto there is life under the ice.  In Earth’s deepest oceans under great pressure and in proximity to very hot vents called “black smokers” we found a form of life unlike anything else on Earth.  We found bacteria called Archaea.  The Archean microbes derive energy from what is called chemosynthesis, taking chemicals that would be toxic to us and making them usable energy for life forms that are more familiar.

Since the discovery of the life near deep sea vents many astrobiologists have said where there is water there is life.   An old adage used by desert people to find water by looking at what is growing on the land.  Now we use water to find life.    While the icy bodies mentioned earlier certainly have water what NASA has announced is the first confirmed liquid flowing water on another body in the universe. 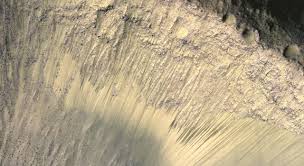 This water flows in these dark linear formations first found by Lujendra Ojha who was an undergraduate student at U. of Arizona and now a graduate student at Georgia Tech.   It is only now with further work we know there is certainly water there.

Based on what we know of how life works on Earth.  I will be bold and say there is a great chance that there is life on Mars.   Taken with various observations of methane on mars I’d say the chance is much better than a coin flip.  In fact, it would be more of a mystery if we did not find life on Mars at this point.  If I were to go to Mars, dig up some of that sub surface wet sand/mud, put it on a microscope slide, and not see something alive I’d think I made a mistake.

These would not be plants, nor animals, nor fungi in any way.  Not just that they would be like a layer of slimy microbes.  Life that most probably bears no relation to any life on Earth.  Life for which Earth we be as alien and inhospitable as life on Mars would be for us.

So brace yourselves.  The day when either a rover or a person (Oh please let it be a person) looks at a sample of wet soil from that layer of Mars and sees life unlike our own is not fiction anymore.  In the lifetime of someone born today we will know there is life on Mars or not.  Either way we will learn greatly about our place in the universe.

TL; DR: Where there is water there is life.  I am going to go on record as saying there is a 95% chance of their being life on Mars.  NASA’s announcement of water flowing under the surface.